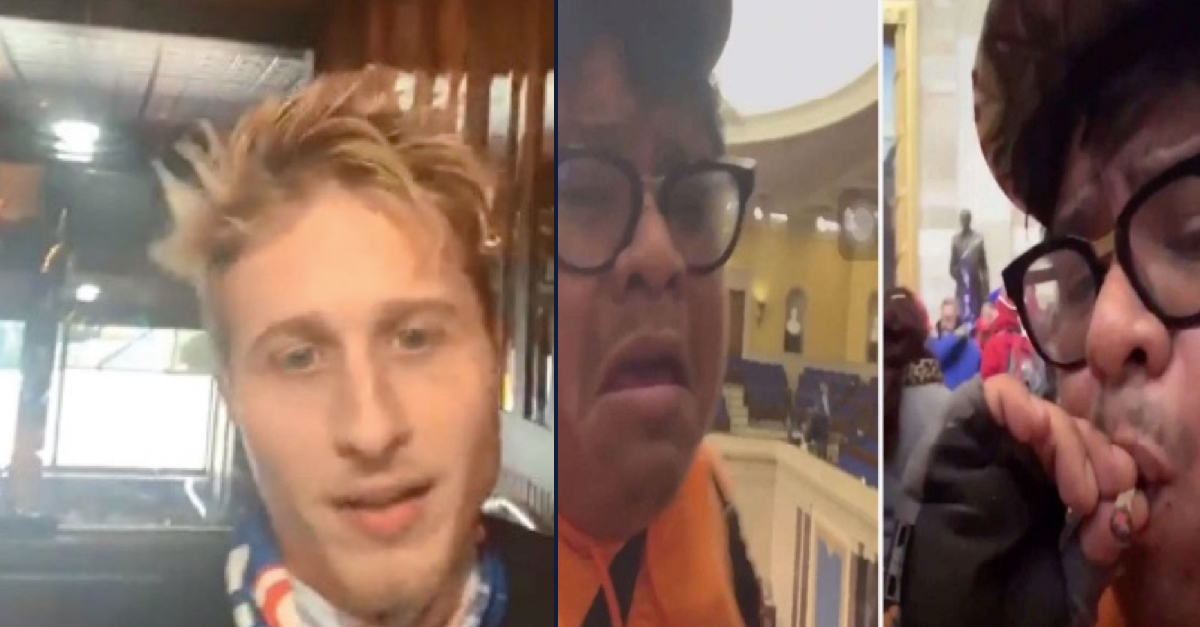 Two memorable figures to emerge from the prosecutions of those accused in the Jan. 6 attack at the U.S. Capitol are apparently considering a plea deal and have asked the court for additional time.

Ronald Sandlin and Nathaniel DeGrave were two of the more memorable faces of the Capitol riot. Sandlin appears to have recorded himself smoking marijuana inside the Capitol, and allegedly discussed “shipping guns” to his home in Tennessee ahead of going to D.C. for Jan. 6, which he referred to as “the boogaloo”—a right-wing reference to a potential U.S. Civil War.

DeGrave, a Las Vegas resident who has expressed sentiments nearing “idol” worship of the former president, allegedly faced off against Capitol police officers and, when the cops began to retreat, appears to have started “banging his chest.”

Now, according to their lawyers, both men may be close to reaching a plea deal that would avoid a trial.

“[T]he parties are in active plea discussions, and it appears that there is a significant chance that this case may be resolved without a trial,” lawyers for the men wrote in a filing Tuesday asking that an upcoming pretrial motion schedule, culminating in a motions hearing scheduled for June 27, be vacated.

It’s the third time these two defendants have requested that a status conference not go forward as scheduled. In February and March, U.S. District Judge Dabney Friedrich granted both requests from Sandlin and DeGrave to continue a status conference hearing.

The suggestion that the case could settle marks a potential change in tone from the defendants. Friedrich, a Trump appointee, had previously rejected DeGrave and Sandlin’s efforts to get the federal obstruction charge dismissed, becoming the first judge in the district to issue a ruling on what had become an increasingly common legal play among Jan. 6 defendants accused of the obstruction felony. At least nine of her fellow judges have followed suit; only one, Carl Nichols—also a Trump appointee—has granted such a motion.

Friedrich also oversaw the first jury trial in the Jan. 6 prosecution. In March, a jury delivered a clean sweep for the prosecution, convicting Texas militia man Guy Reffitt of all five counts against him, including bringing a gun to the Capitol, the federal obstruction charge, and other felonies and misdemeanors.

Josiah Colt, who is identified in court filings as having breached the Capitol alongside Sandlin and DeGrave before dangling from the Senate balcony and sitting in then-Vice President Mike Pence‘s chair, has pleaded guilty to the very federal obstruction charge that Sandlin unsuccessfully sought to dismiss. That charge carries a potential 20-year prison sentence and $250,000 fine.

Colt pleaded guilty in July of 2021, but he has not yet been sentenced—an indication that, pursuant to his plea deal, he continues to cooperate with the government in its sprawling investigation into the Jan. 6 attack on the Capitol.

You can read the motion to vacate, below.