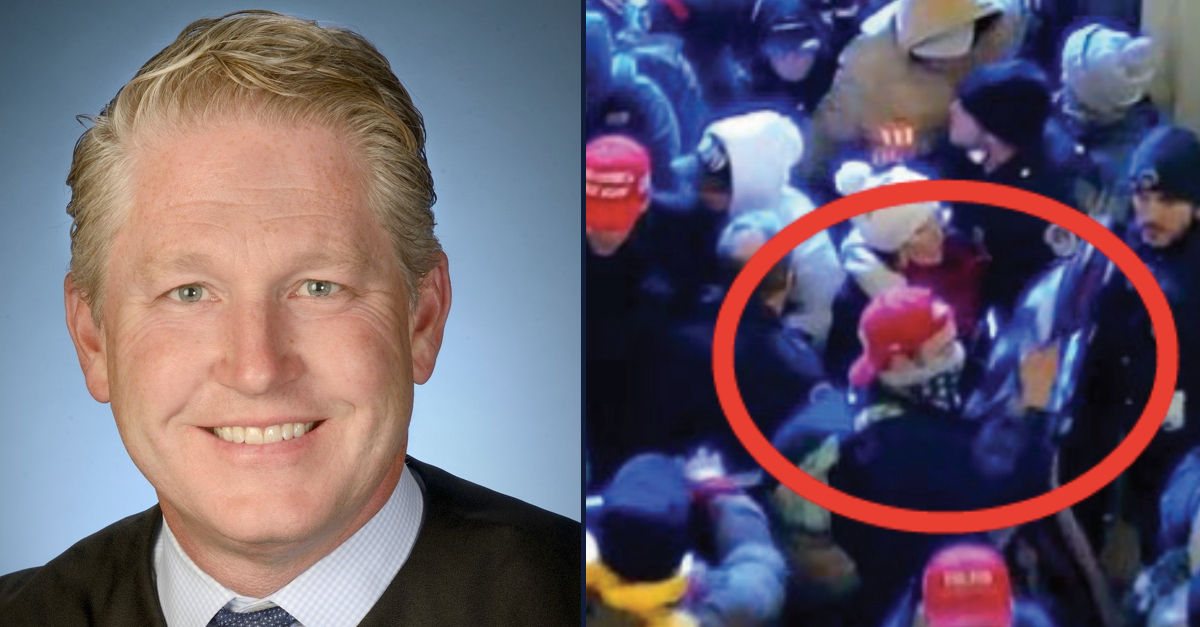 U.S. District Judge Carl Nichols; Garret Miller in the crowd in the Capitol on Jan. 6 (via U.S. District Court and FBI court filings).

A federal judge has become the first to dismiss a criminal corruption charge against a Jan. 6 defendant, breaking from 10 of his colleagues who have allowed the same charge to proceed against others in the government’s sprawling prosecution of those who participated in the breach of the U.S. Capitol.

U.S. District Judge Carl Nichols, who was appointed by Donald Trump, granted Garret Miller‘s motion to dismiss one count of the complaint against him on Monday. According to prosecutors, Miller pushed past police at the Capitol in order to get inside the building as violent Trump supporters overwhelmed police to swarm the building to block Congress from certifying Joe Biden‘s win in the 2020 presidential election.

Prosecutors say that Miller posted his plans to travel to Washington on Facebook. In those posts, Miller allegedly predicted that “crazy shit” would happen and that “civil war could start[.]” He also allegedly threatened to assassinate Democratic Rep. Alexandria Ocasio-Cortez of New York, and according to prosecutors, called for the death of a Black police officer he believed was responsible for shooting Ashli Babbitt, who was killed as she tried to break into the Speaker’s Lobby with other rioters.

Miller, like many other Jan. 6 defendants, had challenged the Department of Justice’s charge that he violated a federal corruption statute that carries a potential penalty of up to 20 years in prison.

Federal prosecutors have been using this language against some Jan. 6 defendants, including Guy Reffitt, who was convicted on that and other charges on Tuesday.

Nichols: Miller “Not Alleged” to Have Taken Action Covered by the Statute

At least 10 judges on the D.C. circuit have denied defendants’ motions to dismiss this charge. The motions generally challenged the statute on three grounds: (1) that the Electoral College certification wasn’t an “official proceeding,” (2) the statute wasn’t meant to address the defendant’s behavior, and (3) that the word “corruptly” is unconstitutionally vague.

Nichols, a Trump appointee, agreed with his colleagues that the Electoral College certification is an official proceeding, but diverged from the other judges after that point.

Nichols’ ruling relied on a painstaking analysis of the use of the word “otherwise” in the statute. While other judges in the D.C. district have determined that “otherwise” encompassed a broad range of alleged behavior, Nichols went the other way. He said the placement of the word, the other sections and subsections of the corruption statute, and the legislative history of section (c)(2) all show that Congress intended to proscribe actions similar to the destruction of documents and other evidence.

According to Nichols, subsection (c)(2) could be interpreted in three ways.

Nichols said that the third interpretation “seems to present the fewest interpretive problems” but noted that it isn’t “abundantly clear” that that interpretation is correct. To solve that problem, Nichols looked at the “statutory context” and the legislative history of subsection (c)(2).

Nichols noted that section 1512(c) was enacted as part of the Sarbanes-Oxley Act of 2002 in the wake of the Enron scandal, when it was revealed that the auditing firm Arther Anderson had systematically destroyed documents that could have potentially incriminated Enron.

“To the extent it is relevant at all, the weight of this legislative history is inconsistent with the government’s position here,” Nichols writes. “It suggests that, in the wake of the Enron scandal, Congress was faced with a very specific loophole: that then-existing criminal statutes made it illegal to cause or induce another person to destroy documents, but did not make it illegal to do so by oneself. Congress closed that loop by passing subsection (c), and nothing in the legislative history suggests a broader purpose than that.”

Nichols determined that because Miller isn’t accused of tearing up papers and destroying documents, he can’t be accused of “corruptly” trying to block an an official proceeding of Congress.

“The Court therefore concludes that § 1512(c)(2) must be interpreted as limited by subsection (c)(1), and thus requires that the defendant have taken some action with respect to a document, record, or other object in order to corruptly obstruct, impede or influence an official proceeding,” Nichols writes. “Miller, however, is not alleged to have taken such action.”

According to Nichols, nothing in the indictment “alleges, let alone implies, that Miller took some action with respect to a document, record, or other object in order to corruptly obstruct, impede or influence Congress’s certification of the electoral vote,” and therefore the charge must be dismissed.

An Unclear Path Forward: The Impact on Other Jan. 6 Prosecutions

Notably, Nichols didn’t address most of his colleagues’ rulings that came to the opposite conclusion. He made no reference to the ruling from U.S. District Judge Dabney Friedrich, another Trump appointee who issued the first denial of a Jan. 6 defendant’s motion to dismiss. In that case, in which Ronald Sandlin is accused of civil disorder and assault in addition to obstruction, Friedrich found that “[b]ased on the plain text, the broader context, and the weight of authority, the Court concludes that § 1512(c)(2) covers a broader set of obstructive acts than the defendants contend.”

Since Friedrich’s ruling, nine other judges in the D.C. district have followed suit and denied motions to dismiss the obstruction claim. That includes the judge overseeing the case of Patrick Montgomery and Brady Knowlton, whose case Nichols did cite in his opinion despite the judge in that case—Randolph Moss—reaching the same conclusion as Friedrich.

It’s unclear what this means for the government’s similar Jan. 6 prosecutions. A spokesperson for the Justice Department declined to comment, citing the department’s policy of not commenting on pending cases.

The federal obstruction charge has landed some high-profile Jan. 6 defendants in jail; both Jacob Chansley, also known as the “QAnon shaman,” and Scott Fairlamb were sentenced to 41 months in prison after pleading guilty to the charge.

Nichols’ ruling is a rare win for Miller in his case so far. Nichols has kept Miller in custody by determining that “no conditions of release could reasonably ensure the safety of the community were Miller to be released before trial.” Nichols also denied Miller’s motions which accused the government of selective prosecution.

Miller still faces other serious charges under the indictment.  Those include engaging in civil disorder, assaulting police, and threatening Rep. Ocasio-Cortez.