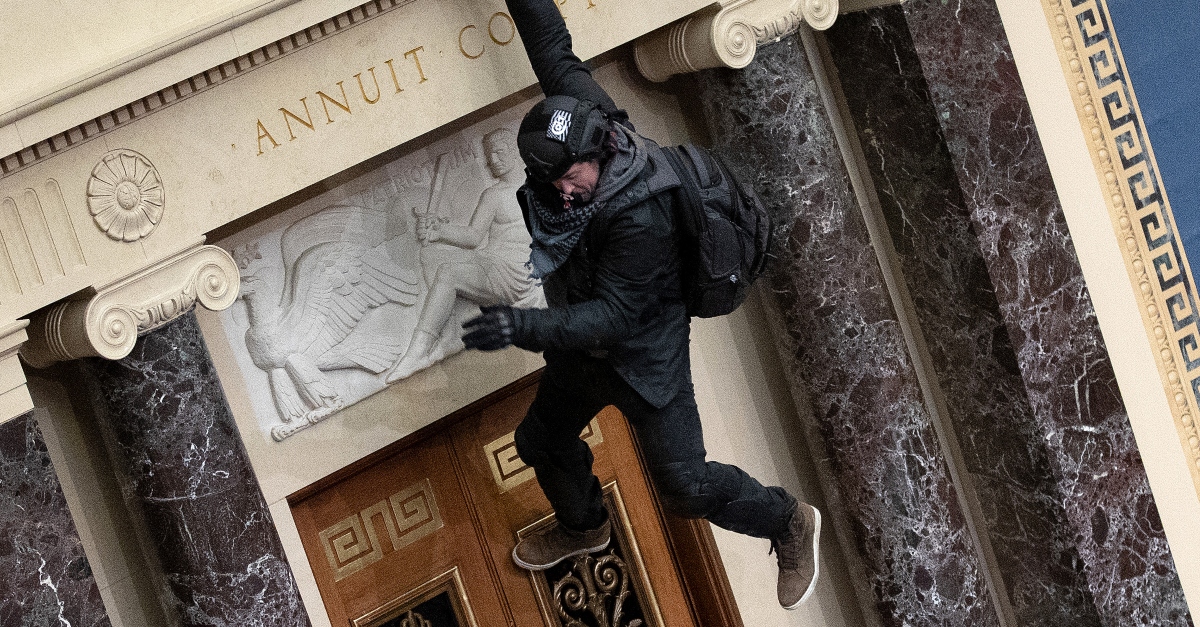 There’s so much to unpack about Trump supporters rushing and breaking into the U.S. Capitol Building on Wednesday. One element in particular are the ramifications of those who forced their way in. Case in point: an Idaho man was photographed hanging from a ledge in the Senate.

His name is Josiah Colt, according to Boise-based news outlet KBOI-TV. He said he was consulting with his attorney.

“I love America,” he said in a statement to the outlet. “I love the people, I didn’t hurt anyone and I didn’t cause any damage in the Chamber. I got caught up in the moment and when I saw the door to to the Chamber open, I walked in, hopped down, and sat on the chair. I said my peace then I helped a gentlemen get to safety that was injured then left.”

He claimed to tell other protesters that this was a “sacred place” and to not cause any damage.

“Some of them wanted to trash the place and steal stuff but I told them not to and to leave everything in it’s place,” he said. “We’re still on sacred ground.”

He also stated an apology to Americans, attributing his actions to the heat of the moment.

“I recognize my actions that have brought shame upon myself, my family, my friends, and my beautiful country,” he said. “In the moment I thought I was doing the right thing. I realize now that my actions were in appropriate and I beg for forgiveness from America and my home state of Idaho. My intention wasn’t to put a stain on our great Country’s Democratic process.”

The crowd rushes a line of police attempting to block access to inner parts of the Capitol. Police are forced to retreat and stand down #DC #Washington #CapitolBuilding pic.twitter.com/WEGwumvimk

Video attributed to him online shows him outside and apparently out of breath, saying he was the first person to hop down into the chamber.

Josiah Colt of Boise, Idaho (his entire name is on his social media) admits to breaking in the Capitol. They make it easy….. 🥴 pic.twitter.com/YKQigR9BlS

As part of the general chaos on Wednesday, Trump supporter Ashli Babbitt was shot and killed by police in Capitol Building. Three other people are said to have died from “separate medical emergencies” near the Capitol.