Robert Chapman, Busted by Bumble for Jan. 6, Gets Probation

Man Who Told Bumble Match He ‘Did Storm the Capitol’ on Jan. 6 Learns His Fate 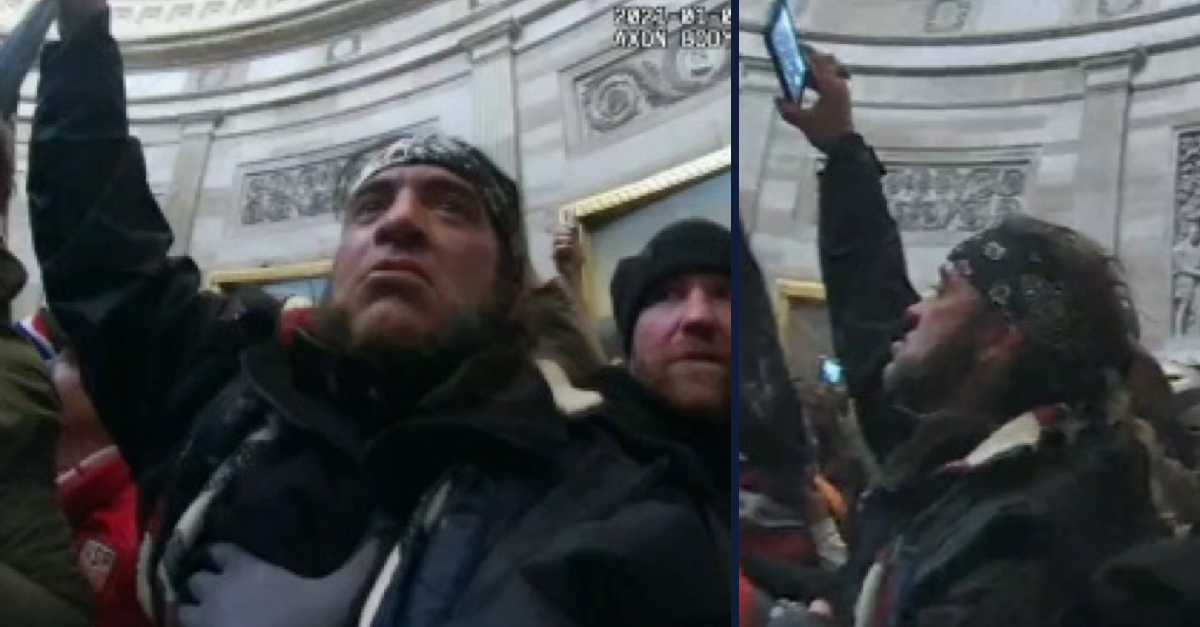 Robert Chapman is seen inside the U.S. Capitol on Jan. 6 (images via FBI court filing).

A New York man who bragged on a dating app that he participated in the Jan. 6 attack on the U.S. Capitol—and was later flagged to the feds by a would-be match—has been sentenced to probation.

Robert Chapman, a longtime electrical worker from Carmel, New York, first emerged on federal investigators’ radar just days after the Jan. 6 siege when a user on the Bumble dating app contacted the federal authorities to report an exchange.

“I did storm the [C]apitol,” Chapman told the potential love match-turned-FBI tipster on Jan. 13. “I made it all the way to Statuary Hall! [D]id an interview with Robert O’Morrow of the Washington Post. [A]lso did online interview with Jess Brevins of the WSJ.”

“We are not a match,” the Bumble user wrote back.

“I suppose not,” Chapman replied.

Chapman did, indeed, storm the Capitol building, and posted pictures of himself to social media posing with various statues. He later re-entered the building after exiting it, and according to prosecutors, encouraged fellow rioter Jenna Ryan, who would later be sentenced to jail, to enter the Capitol, allegedly telling her that “you just have to shove your way in there.”

(Ryan later pleaded guilty and was sent to jail, which she apparently viewed as a wellness retreat.)

Chapman entered the Capitol at around 2:45 p.m. through the Upper West Terrace door, about a half-hour after the initial breach by angry Donald Trump supporters who opposed certifying Joe Biden’s win in the 2020 presidential election.

“I’M FUCKIN INSIDE THE CRAPITOL!!!” Chapman posted to Facebook. He made his way to Statuary Hall and the Rotunda, and surveillance footage appears to show him filming police officers who were trying to clear the Rotunda of the rioters.

Chapman pleaded guilty in December to parading, demonstrating, or picketing inside a Capitol building, a misdemeanor punishable by up to six months in jail, five years’ probation, and a $5,000 fine. Prosecutors requested a sentence of 45 days behind bars followed by three years of probation and 60 hours of community service. Chapman asked for a sentence of probation only.

U.S. District Judge Rudolph Contreras issued a sentence Wednesday closely aligned to what Chapman had requested: 18 months of probation, including three months of home confinement, plus 60 hours of community service and a $742 fine. During his term of home confinement, Chapman will be subject to location monitoring and will be allowed to leave his house for work, education, religious services, attorney visits, medical appointments, court appearances, and court-ordered obligations such as community service.

During the sentencing hearing, Assistant U.S. Attorney Brittany Reed argued that although Chapman didn’t engage in physical violence at the Capitol, his own description of his actions that day suggest that he deserves some time behind bars.

“Mr. Chapman states he scaled a wall to enter the building,” Reed told Contreras. “The government was not able to find evidence to support that, but that has been an aggravating factor a lot of judges have considered, and have given terms of incarceration because of that.”

Chapman’s lawyer Thomas Young pushed back on his own client’s claim, saying that Chapman may have been overstating his abilities.

According to Contreras, Chapman’s criminal history—a factor judges must consider in determining a criminal sentence—was relatively modest compared to others who have appeared before him, although perhaps more significant than many other Jan. 6 defendants.

Young minimized his client’s criminal record, offering detailed explanations for each offense that he said explained why none of the crimes were particularly serious.

“Most of us are pretty decent people most of the time, with small slivers of failing,” Young said. “I think you can say this about Mr. Chapman as well.”

Reed pushed back on this, saying that Jan. 6 was not a run-of-the-mill criminal undertaking.

“In the same way that Mr. Young characterized Mr. Chapman’s behavior as just sort of carefree, and someone who just got a little too excited, that’s the same way he described his behavior when he talked about his misdemeanor offenses,” Reed said. “That’s the same characterization of his conduct on Jan. 6, which I think simply is not comparable here. This is not a minor offense where someone just got too excited and just did something like graffiti. Those two are just not analogous.”

“This is a standout event, in history and in Mr. Chapman’s criminal behavior,” Reed added.

Chapman spoke to Contreras directly and expressed an outlook that was optimistic, if not overtly cheerful.

“I’m hoping as a nation and as a county we can hope to heal and bond together and become a much more unified loving nation,” he said, after insisting that he felt remorse and has been saying prayers over what happened on Jan. 6.

“I’m very remorseful that any individuals were hurt or injured or negatively impacted that day,” he continued. “I never wish for anyone to be hurt or adversely affected … I’m optimistic for the future [that] we can become a much more loving caring nation toward each other.”