Women Used Popular Dating App ‘Bumble’ to Capture Evidence of Capitol Rioters, Then Sent It To the FBI 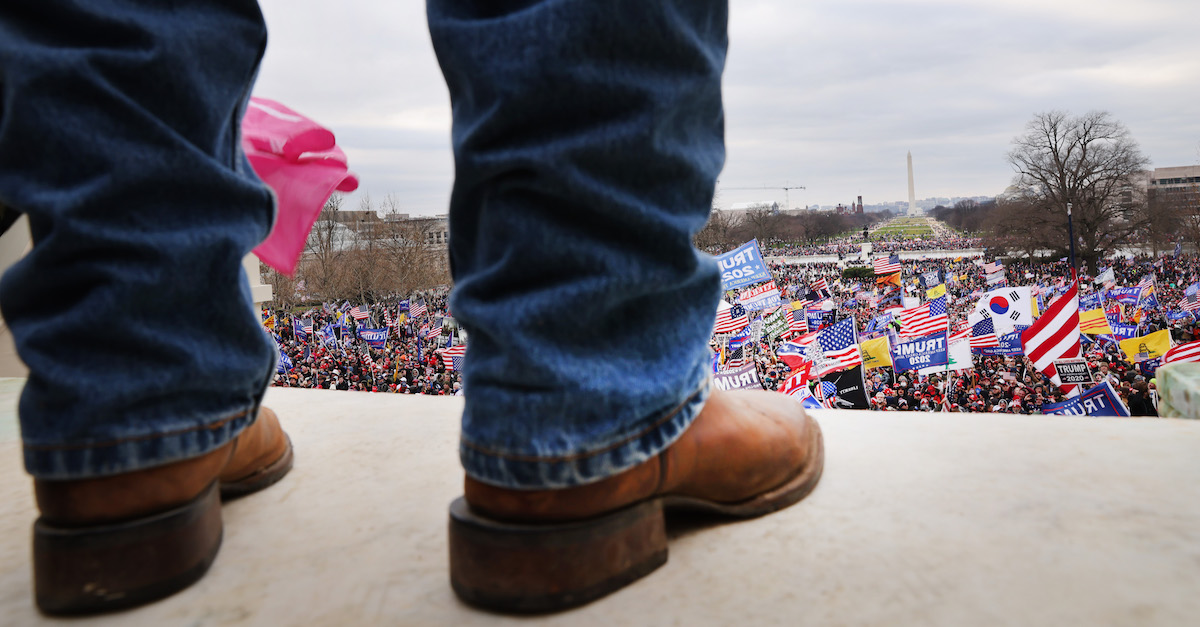 Never underestimate the evidentiary potential of those looking to get a little lovin’ while they’re mounting an insurrection.

Multiple women used the dating app Bumble following the attack on the U.S. Capitol last week to lure unsuspecting rioters and turn them over to the FBI. Bumble’s tag line, “where women make the first move,” seems perfectly tailored to this particular exercise of ingenuity.

This is funny but actually serious. There are DOZENS of men on DC dating apps right now who were clearly here for the insurrection attempt yesterday. Some say it directly, others are obvious from MAGA clothing, location tags, etc. Is that info useful at all for law enforcement?

One user tweeted that she knew someone who’d changed set her political preference on Bumble to “conservative,” thus obtaining pictures and videos of rioters inside the Capitol. The move earned props from John Sipher, veteran of the Central Intelligence Agency’s National Clandestine Service.

I know a friend of a friend who changed her preference on Bumble to Conservative. She’s matching with MAGA bros and they’re bragging and sending her pics and videos of them in the Capitol. She’s sending them to the FBI.

The tweets about women’s cyber-sleuthing efforts went viral. Bumble issued a statement on January 12, saying it had “taken action on accounts that have violated . . . policy.”  It also said it was “monitoring activity and will remove any users that have been confirmed as participants in the attack of the U.S. Capitol.”

Bumble prohibits content that encourages any illegal activity. We have taken action on accounts that have violated this policy and we are monitoring activity and will remove any users that have been confirmed as participants in the attack of the U.S. Capitol.

While distancing itself from the riot, Bumble did not appear wholly supportive of the women’s efforts to aid law enforcement. On January 14, Bumble issued another statement, saying that it had “temporarily removed” its “politics filter to prevent misuse.”

It definitely tells me @bumble is protecting insurrectionists, which is a gross look.

We’ve temporarily removed our politics filter to prevent misuse. However, please rest assured that we prohibit any content that promotes terrorism or racial hatred, and we’ve already removed any users that have been confirmed as participants in the attack of the US Capitol.

The internet was not pleased.

Not @bumble removing its politics filter. Come on. pic.twitter.com/LbQclllvup

Really @Bumble? You only removed those guys after they were brought to your attention by women protecting our democracy. Then, you protected the insurrectionists by removing the political filter instead of taking up the mantle and working to find and report these guys?

@bumble should be publicly congratulating the women who used their platform this way.

Perhaps the dating website’s reluctance to embroil itself in the fallout from the Capitol riots was connected to its recent filing to go public. Bumble, Inc., which also owns European dating site Badoo, boasted 2.4 million paying users as of September 2020 and reported $417 million in revenue in the first nine months of 2020. The company was founded in 2014 by Whitney Wolfe Herd and Russian billionaire Andrey Andreev. Wolfe Herd previously settled a sexual harassment case with Tinder, her former employer.

When questioned about its motivation for removing the politics filter, Bumble reportedly told the press that “Where our AI technology flags photos, hate symbols or text content that promotes the insurrection or related activities, those are removed, with repeated offenses or more extreme content resulting in a user being banned.”

There was wide public condemnation for Bumble’s decision to remove the filter.

Wait, what?! ….People who rioted in the Capitol should be reported. Also, it’s its most useful filter. Suspending it is a huge mistake.

Yes! So disappointing that Bumble stopped this.

Hours later, though, the filter was back up.

As the FBI continues to investigate the insurrection on January 6, it will surely be following more leads from “the hive.”

Seduction: a tried and true method of luring Nazis to their doom since 1939

Bumble did not immediately respond to Law&Crime’s request for comment.