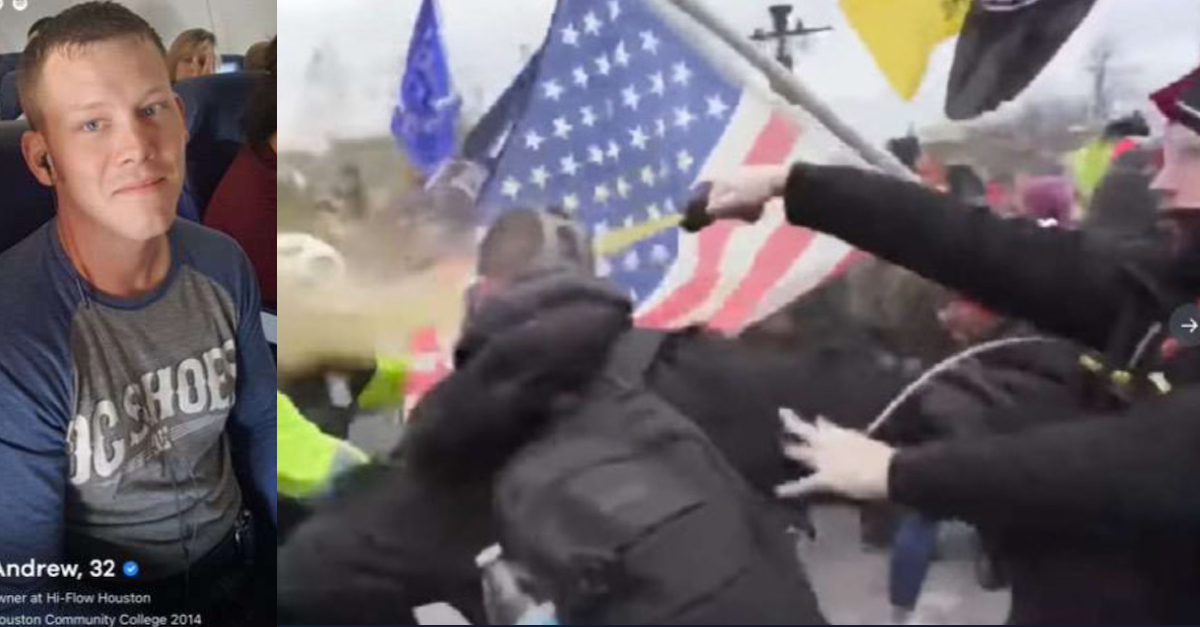 Andrew Taake in a picture posted on the Bumble dating app (left); Taake allegedly deploying chemical spray on police officers while holding a metal whip in a confrontation outside the U.S. Capitol on Jan. 6 (right) (images via FBI court filings)

One day after filing a motion to change jail locations, lawyers for a Texas man who allegedly attacked police at the U.S. Capitol with pepper spray and a metal whip on Jan. 6—and was later flagged to the feds by a potential online dating match—say they may be close to reaching a plea deal.

Andrew Taake was one of multiple Jan. 6 defendants who appear to have been done in by dating apps. In Taake’s case, he apparently bragged to a potential match on Bumble, where, according to the company, “women make the first move.”

He bragged to his would-be Bumble date that he was “the very first person to be sprayed that day,” presumably with chemical spray, and while that claim hasn’t been proven, prosecutors allege that Taake himself deployed a can of pepper spray on police officers trying to keep the riotous crowd from breaching the building.

Taake is also alleged to have been carrying a metal whip, which also appears in photos included in the prosecution’s complaint against him.

Taake was indicted on a range of felony and misdemeanor charges, including civil disorder, obstruction of an official proceeding, entering and remaining in a restricted building or grounds with a deadly or dangerous weapon, and assaulting, resisting, or impeding police while using a dangerous weapon.

He has been in custody since his arrest in June 2021. He is currently housed at a federal penitentiary in Lewisburg, Pennsylvania, but his lawyers want him moved to Washington, D.C., closer to where their office is located.

His lawyers say that the stakes for Taake are nothing less than his constitutional rights.

“Undersigned counsel respectfully files this Motion with the Court seeking an Order of appropriate relief transferring Mr. Taake either back to the D.C. Department of Corrections or a detention center closer to the District of Columbia,” attorneys Michael Lawlor and Nicholas Madiou said in a filing Tuesday. “Undersigned counsel makes this request to ensure Mr. Taake’s rights under the Sixth Amendment are secured.”

Lawlor and Madiou say that Taake’s “incarceration in a maximum security U.S. penitentiary infringes his right to communicate with counsel, and access the discovery provided by the Government in this case.”

According to the Federal Bureau of Prisons, USP Lewisburg is a “medium security U.S. penitentiary with an adjacent minimum security satellite camp.”

Taake’s lawyers also say that the distance between their office and Lewisburg is an additional hindrance to their ability to meet with him.

“Housing the Defendant in a location in this District or closer to this District will permit undersigned counsel more regular contact with Mr. Taake as he seeks to review discovery and decide whether to resolve this case short of trial or, in the alternative to mount a defense to the charges now pending before him.”

Taake’s attorneys’ office is located in Maryland, just outside of Washington, D.C., some 200 miles away from Lewisberg.

At a status conference Wednesday, lawyers for both Taake and the government indicated that the case may be headed for a plea deal.

“We have a plea offer out,” prosecutor Barry Disney told U.S. District Judge Carl Nichols. “I believe [the] defense is looking favorably at that.”

“They did extend an offer, but we counter-offered,” Lawlor said, explaining that prosecutors offered Taake a chance to plead guilty to the federal obstruction charge, and Taake’s team countered with a plea to the assault charge. Lawlor indicated that the parties were haggling over the determination of Taake’s “base offense level,” which would ultimately have an impact on sentencing.

The government’s offer to allow Taake to plead guilty only to the obstruction charge is notable, as Nichols, a Donald Trump appointee, has been the only judge in the D.C. District to dismiss that very charge, while at least 10 of his colleagues on the bench have allowed it to proceed.

Nichols is reportedly reconsidering that decision.

A plea agreement to either of those charges wouldn’t necessarily translate into Taake’s release from prison. The federal obstruction charge carries a potential 20-year prison sentence, and because Taake is alleged to have used a deadly or dangerous weapon, the assault charge is also punishable by up to 20 years behind bars.