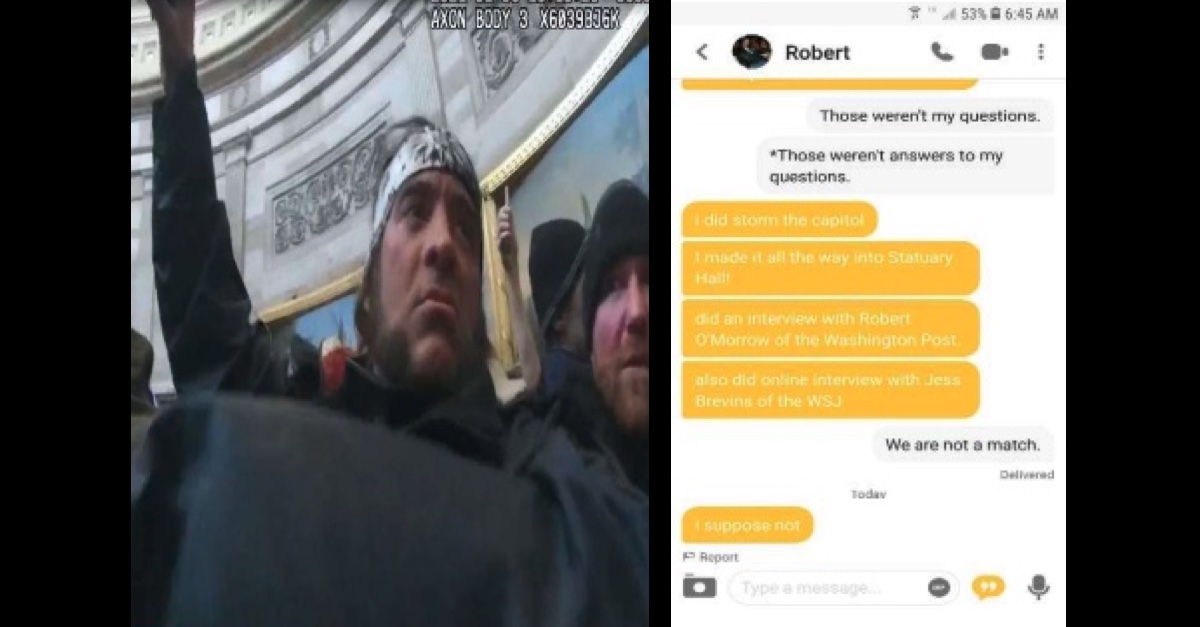 The upstate New York man who was arrested after boasting about storming the Capitol on Jan. 6 to a potential online dating match has reached a plea deal with the government.

On Jan. 13, Robert Chapman told a potential match on the Bumble dating app that he was among the scores of Donald Trump supporters who breached the Capitol building on Jan. 6 seeking to stop the Electoral College certification of Joe Biden’s win in the 2020 presidential election.

“I did storm the [C]apitol,” Chapman said. “I made it all the way to Statuary Hall! [D]id an interview with Robert O’Morrow of the Washington Post. [A]lso did online interview with Jess Brevins of the WSJ.”

“We are not a match,” the Bumble user wrote back.

“I suppose not,” Chapman replied.

Chapman was arraigned Tuesday and pleaded not guilty to a charge of parading, demonstrating, or picketing in a Capitol building. After Chapman formally entered his plea, Assistant U.S. Attorney Brittany LaShaune Reed told U.S. District Judge Rudolph Contreras that Chapman had agreed to a plea deal.

“It’s safe to say we do have a resolution in this case,” Reed to Contreras, a Barack Obama appointee, at Tuesday’s hearing.

The Bumble user to whom Chapman boasted about breaching the Capitol reported him to investigators that same day, according to the complaint.

Chapman is from Carmel, New York, about 60 miles north of Manhattan. According to investigators, he went by “Robert Erick” on Facebook.

The unnamed tipster who had communicated with Chapman on Bumble also shared with investigators a screenshot of a Facebook exchange in which commenters are discussing what appears to be a picture of Chapman inside Statuary Hall.

“My Dear friend and Brostar Robert made it in the Capitol building at the protest yesterday … .Wooo Hooooooooo!!!!” wrote one Facebook user.

“[T]hese are your peers? colleagues? they are a bunch of little bitch trolls. keyboard warriors who don’t do a fuckin thing,” Chapman, as Robert Erick, wrote in a comment. 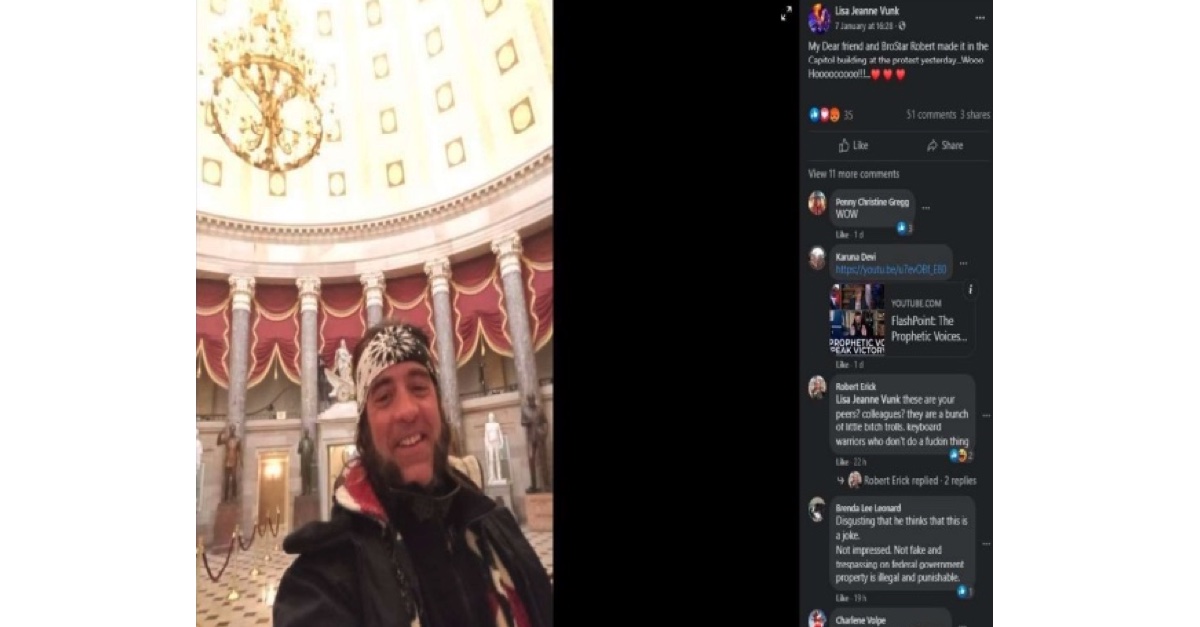 Investigators matched the Chapman’s social media posts to a mugshot from a 2017 arrest. 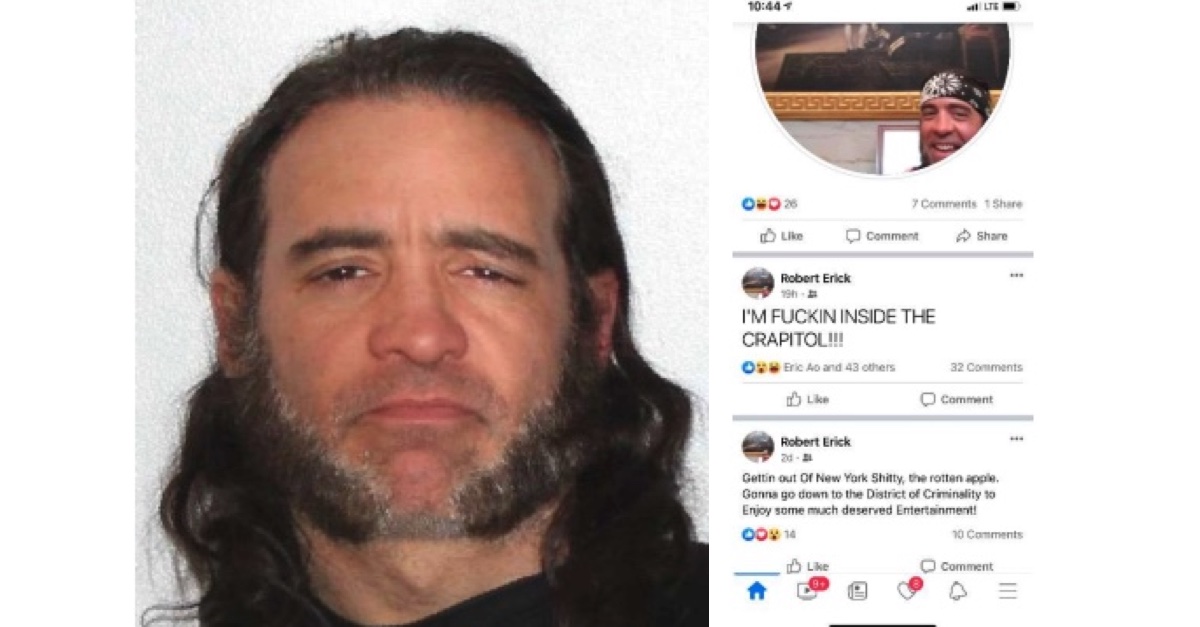 According to the complaint, Chapman is seen on body-worn camera footage from the Metropolitan Police Department inside the Capitol building, including inside Statuary Hall. Chapman is also seen “filming the activity inside of the U.S. Capitol using his cellular telephone,” the complaint says.

Details of Chapman’s plea were not discussed at Tuesday’s hearing. The plea will officially be entered with the court at a hearing on Wednesday, Dec. 15.

Chapman was charged in April with knowingly entering or remaining in a restricted building or grounds, and violent entry and disorderly conduct on Capitol grounds. He was charged on Nov. 16 with parading, demonstrating, or picketing in a Capitol building.

Chapman is one of at least two Jan. 6 defendants who were tipped off to authorities by potential Bumble matches. Andrew Taake, who is accused of using a metal whip and pepper spray on law enforcement officers, discussed his participation in the Capitol riot with his potential Bumble match, and sent pictures of himself that he claimed were taken after he was pepper sprayed.

Bumble is a social networking platform for that matches people for “dating, networking, or meeting friends online.” In each potential match involving a man and a woman, only the woman is able to “make the first move, shaking up outdated gender norms,” according to the platform’s website.

You can read the original complaint against Chapman and the statement of facts here and here.