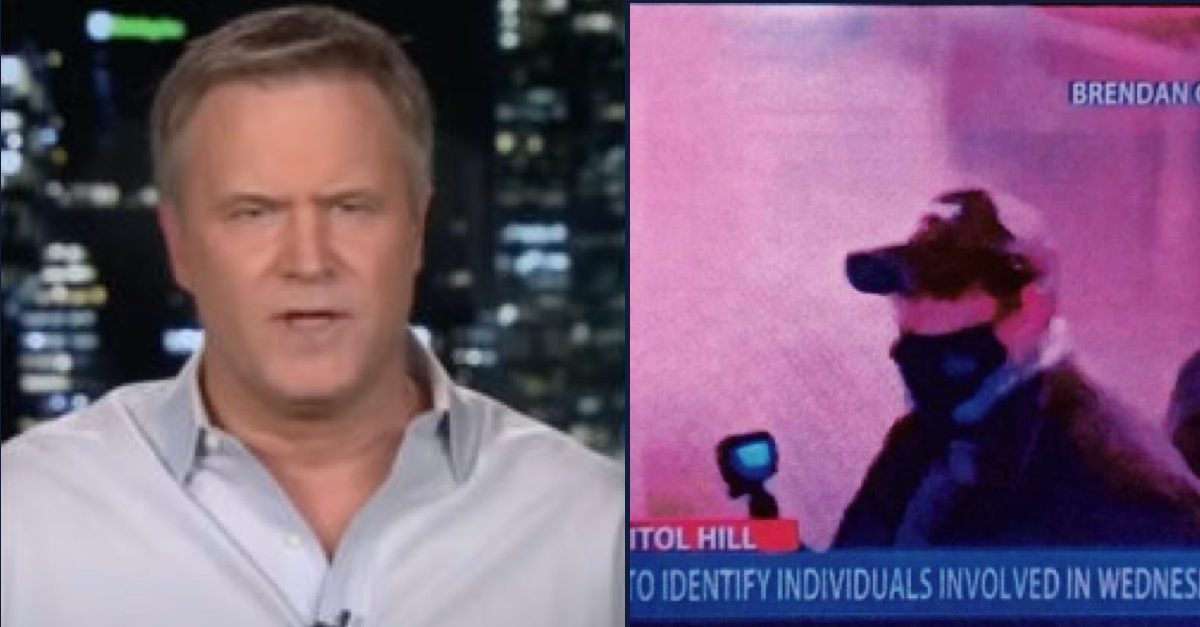 Left: attorney John Pierce, during an interview with Tucker Carlson; right, Lloyd Casimiro Cruz, Jr., inside the Capitol on Jan. 6.

A high-profile lawyer defending multiple people accused in the Jan. 6 attack on the U.S. Capitol says that the federal search warrants used to trace one of his clients to the building are unconstitutional — and that the case against his client should be dismissed.

The motion falls days after a similar Fourth Amendment challenge failed in a separate case related to the attack on the U.S. Capitol.

John Pierce, in a motion filed Saturday on behalf of client Lloyd Casimiro Cruz, Jr., argues that any evidence obtained from the search warrants that the FBI obtained on the day of the attack is so-called “fruit from the poisonous tree” — so poisonous, the legal theory goes, that it cannot constitutionally be used in a criminal prosecution.

Cruz, who is from Missouri, is accused of joining the mob of Donald Trump supporters at the Capitol on Jan. 6. Prosecutors say he drove with friends to Washington on Jan. 3 to attend Trump’s so-called “Stop the Steal” rally, during which Trump exhorted the crowd to march to the Capitol as Congress certified Joe Biden‘s win in the 2020 presidential election, a constitutionally-mandated process that marks the peaceful transition of power from one U.S. presidential administration to the next. The riotous crowd ultimately overwhelmed police, grinding the certification to a temporary halt and forcing lawmakers and staff to either leave the building or shelter in place.

According to court documents, Cruz told federal investigators that he recorded some of the destruction and chaos at the Capitol that day using a GoPro camera, which he later shared with investigators. Cruz faces four trespassing and disorderly conduct charges that have come to be known as the “standard misdemeanors” in Jan. 6 cases. Penalties range from six months to one year in jail if convicted.

The FBI ultimately tracked Cruz down through location data obtained from AT&T and Google through search warrants obtained on Jan. 6.

Per the FBI statement of facts in support of the probable cause warrant for Cruz:

According to records obtained through a search warrant for records in the possession of AT&T, on January 6, 2021, in and around the time of the incident, the cellphone associated with a telephone number ending in 5584 was identified as having utilized a cell site consistent with providing service to a geographic area that included the interior of the United States Capitol building.

Login Internet Protocol (IP) address information provided by Google, and research in public records, were used to identify LLOYD CASIMIRO CRUZ, JR., residing in Polo, Missouri, as the subscriber of telephone number ending in 5584. I was requested to conduct logical investigation to identify the individual in possession of the referenced device within the U.S. Capitol building, and to conduct investigation to identify potential criminal offenses that were committed, on January 6, 2021.

In the probable cause affidavit, the FBI agent who interviewed Cruz said that the defendant shared a picture with him that apparently places him inside the Capitol building at the time of the riot.

“Cruz stated he observed himself on surveillance footage from inside the U.S. Capitol building posted on One America News Network’s website,” the FBI affidavit says. “Cruz took a screen shot of this image on this website with his cell phone. I took [a] photograph of this screen shot[.]”

The AT&T and Google search warrants that led to the FBI’s investigation and, ultimately, Cruz’s arrest, Pierce argues, were illegal, and any evidence derived from those search warrants violates his client’s constitutional rights.

“[T]he entire complaint against the Defendant originated with an unlawful blanket general warrant of cellphone location data, which plainly lacked requisite specificity,” Pierce writes in his motion, filed Saturday. “Investigators then used such metadata to identify Cruz, rather than first having probable cause to identify Cruz and probable cause to believe Mr. Cruz had committed an offense, as required by the 4th amendment [sic].”

“Investigators then tracked down Cruz and obtained statements from him, as well as other evidence,” Pierce continued. “All of this evidence is fruit of the poisonous tree. Accordingly, this case must be dismissed en toto [emphasis in original, using the Latin phrase for in its entirety].”

According to Pierce, the timeline of the FBI’s investigation supports his claim:

1. The FBI began its investigation into (later to be identified) Cruz, without any probable cause to suspect Cruz of any crime;

2. The FBI used two blanket general warrants (of both Google and AT&T) to scour through cell phone and other digital metadata to then identify Cruz as a potential suspect crime (although what crimes, if any, the FBI did not know);

3. Even after identifying Cruz as a potential suspect via these general warrants, the FBI lacked probable cause to arrest him for any specific crime;

4. The FBI then flew to Missouri to question Cruz to determine if there was any probable cause to charge Cruz with a crime or crimes; and

5. Only upon questioning Cruz and getting Cruz to provide other evidence did the FBI have probable cause to charge Cruz with any crime (two misdemeanors).

Pierce, who is known for representing right-wing causes célèbres — including, before he was fired from the defense team, acquitted Kenosha protest gunman Kyle Rittenhouse and “the very image of the riot” Jacob Chansley — describes the FBI’s search warrant in dramatic fashion, implying that something significantly more nefarious is afoot.

“The warrants in this case plainly lacked probable cause with any particularity regarding the person and things to be searched or even the crimes to be alleged,” Pierce writes. “Indeed, it is plain that this case was initiated by one of the worst general warrants in American history. Counsel suspects that there may be other January 6 defendants who were similarly identified by these general warrants and asks the Court to utilize its inherent powers to open a more wide-ranging inquiry into the FBI’s use of these unconstitutional warrants.”

Pierce also asks to put the agents involved in the warrants to answer questions under oath.

“Cruz requests an evidentiary hearing in which all agents responsible for these warrants shall be made to appear, testify, and provide all supporting affidavits and/or documentation,” Pierce writes, emphasizing this request in all-bold typeface.

Pierce’s motion comes days after a ruling from the Chief U.S. District Judge denying another Jan. 6 defendant’s request to suppress evidence on similar grounds. On Thursday, Beryl Howell, a Barack Obama appointee, denied Matthew Bledsoe‘s motion to suppress evidence on Fourth Amendment grounds, finding that Bledsoe — who prosecutors say live-streamed extensively from the Capitol that day — did not have a reasonable expectation of privacy location data that Facebook ultimately provided to the FBI.

Cruz’s case is before Senior U.S. District Judge Reggie B. Walton, a George W. Bush appointee. It is unclear when he will rule on the motion; a status conference in the case is set for Tuesday.

The recent filing of two motions seeking to either suppress or dismiss charges on Fourth Amendment search and seizure grounds may signal yet another coming fight in Jan. 6 cases in which judges could reach a variety of conclusions. Previously, several defense attorneys in Jan. 6 cases have filed motions to dismiss a particular federal obstruction charge levied against many accused rioters, and most — but not all — D.C. District judges have rejected these efforts.

The judges are less aligned when it comes to the issue of so-called “split sentences” — efforts by federal prosecutors to have defendants convicted of certain Jan. 6 misdemeanors serve both jail time and probation. Some judges have said that such sentences are allowed, but others have disagreed, leaving a split on the bench.

The DOJ declined to comment about Pierce’s motion to Law&Crime.