Federal Judge Says Split Sentences Are Allowed, But Doesn’t Send Man Who Believed Jan. 6 Was a Government ‘Psyop’ to Jail 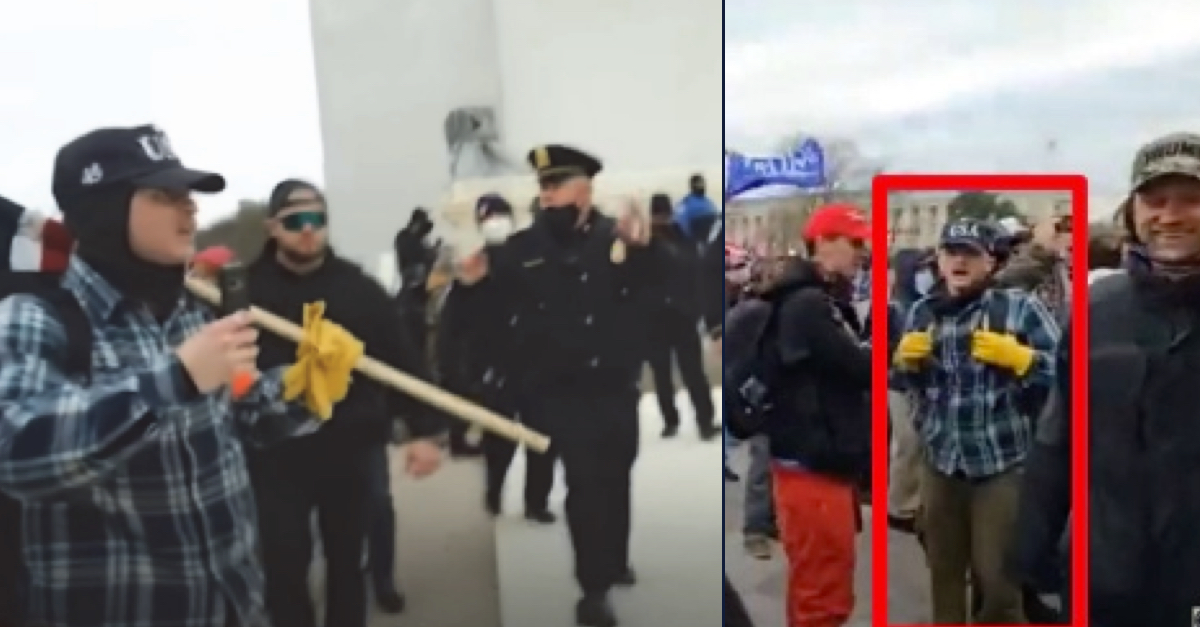 A judge overseeing Jan. 6 cases says that he’s allowed under federal law to issue a so-called “split sentence” consisting of both jail time and probation for petty offenses, but nevertheless declined to do so in a misdemeanor case before him, instead ordering the defendant to spend three months living in a halfway house.

Micajah Joel Jackson, 26, had pleaded guilty in November to one count of parading, demonstrating, or picketing in a Capitol building. Jackson, a former Marine, was seen inside the Capitol building, walking through Statuary Hall, joining the crowd in chants, and standing with the crowd outside the House chamber. He verbally confronted police officers outside the building—taunting them with repeated shouts of “Oathbreakers!”—but was not accused of engaging in physical violence or property destruction.

The misdemeanor charge to which Jackson pleaded carries a potential sentence of up to six months in jail and a maximum $5,000 fine. Prosecutors were seeking 60 days in jail and three years of probation, while Jackson had asked for a term of probation only.

Thursday’s hearing before U.S. District Judge Randolph Moss was the conclusion of a sentencing proceeding that started earlier this month. Moss, a Barack Obama appointee, suspended that hearing and asked for additional briefing on the split sentence issue, as well as for information as to whether incarceration would interrupt Jackson’s access to his Veteran’s Affairs (VA) disability benefits.

While it turned out that going to jail wouldn’t affect Jackson’s VA benefits, Jackson’s lawyer Maria Jacob argued that her client shouldn’t be incarcerated because federal sentencing law doesn’t allow for split sentences, a position taken by dozens of Jan. 6 defendants who have pleaded guilty to the parading and picketing charge.

Judges have been going back and forth on the issue for months, and do not appear to have reached a consensus. U.S. District Judge Dabney Friedrich, a Trump appointee, has said that it’s an “either or” situation, while Judge Colleen Kollar-Kotelly, a Bill Clinton appointee, appears to agree, having amended a split sentence after the defendant challenged it.

However, Senior U.S. District Judge Royce Lamberth, a Ronald Reagan appointee, issued an opinion in the case of James “Les” Little that included a painstaking analysis of the language of the sentencing statute, and ultimately concluded that the law does allow for split sentences.

Little has appealed the sentence and his conviction.

“I tend toward Judge Lamberth’s view of the statute,” Moss said Thursday during Jackson’s sentencing hearing, although he noted that it was a “close call” and that parties to Jan. 6 cases will continue to argue over it.

However, Moss declined to sentence Jackson to jail.

“After giving it much thought, I don’t think that’s the right sentence to impose here,” Moss said.

Instead, Moss sentenced Jackson to three years of probation, and set as a condition that he live for three months in a residential re-entry center (RRC), also known as a halfway house.

“I want you to remember every day that you’re not just going home,” Moss said to Jackson. “I want you to go home every day for a 90 day period to an RRC [so that] you can use that as an opportunity to self-contemplate what has happened and really appreciate the significance of [Jan. 6].”

“I really hope that with some further contemplation you really will demonstrate more broadly the remorse that you indicated in your letter,” Moss added.

He also ordered Jackson to participate in a mental health treatment program.

During the hearing, federal prosecutor Sean Murphy said that Jackson’s actions since pleading guilty, including a January 2022 interview in which he referred to Jan. 6 as a “psyop,” or “psychological operation” by the government to “promote totalitarianism,” indicate that he wasn’t truly taking responsibility for his role in the deadly chaos at the Capitol that day.

Murphy specifically addressed Jackson’s pre-sentencing letter to the court, in which Jackson referred to Jan. 6 as a “dark day for every American citizen.” Murphy said that Jackson didn’t use the words “dark day” to mean it was a day when “a key component of our democratic process was disrupted and [he] was a part of that.”

“Instead, it’s being used to say that it was a dark day because citizens were attacked by the government,” Murphy said.

At the end of the hearing, Moss urged Jackson to be “the person you would want history to see you as.”

“I think you know what that is, and I wish you well,” Moss added.