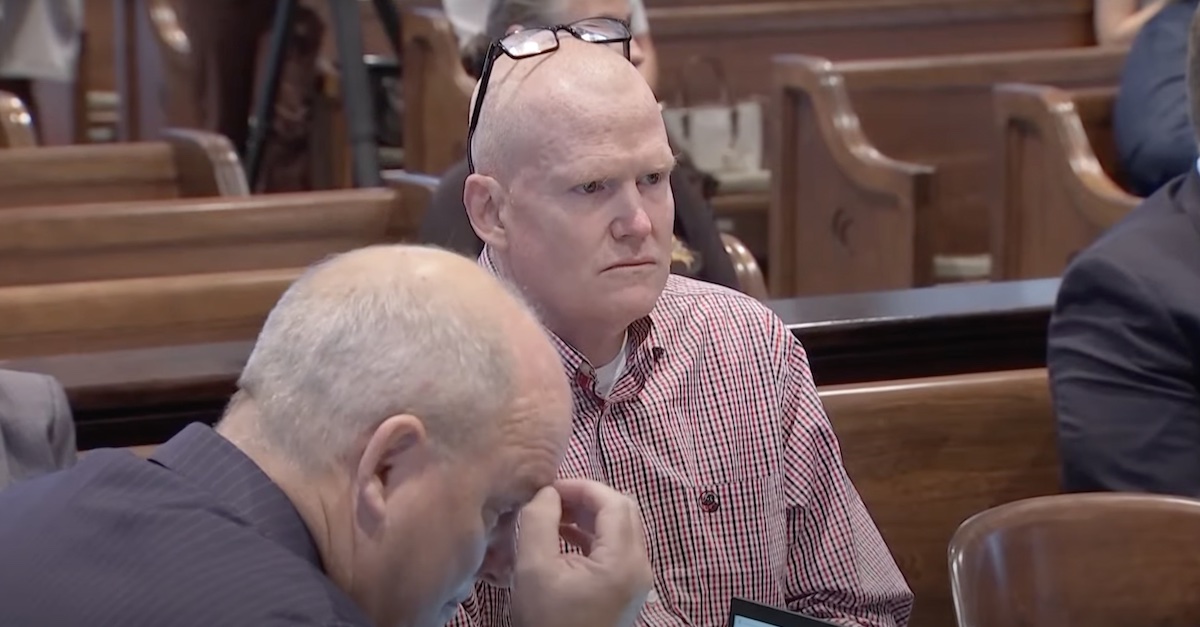 “This case is unique, it’s unprecedented in South Carolina history, inasmuch as it combines violent crime with alleged corruption of someone’s law license on a scale that’s never been seen before,” state grand jury prosecutor Creighton Waters said in urging a judge to issue a protective order.

Waters added that it would be difficult to imagine a more appropriate case for a protective order than one with the “intense media interest” the Murdaugh case engendered.

“None of this is to preclude a public trial,” Waters emphasized. “Everything will come out in the open. All this is meant to do is have it come out when it’s supposed to, and that’s in this courtroom.”

Murdaugh stands accused of killing his 52-year-old wife Maggie Murdaugh with a rifle and his 22-year-old son Paul Murdaugh with a shotgun on June 7, 2021. He was indicted in July for the alleged double murder, which authorities say took place at the Lowcountry family’s 1,770-acre hunting estate in Colleton County.

After some 45 minutes of arguments inside Colleton County General Sessions Court, South Carolina Judge Clifton Newman handed down a mixed ruling — that decidedly favored the government’s request. Though Newman emphasized the government’s obligations to turn over evidence to the defense, the judge also issued a temporary order restricting the defense from releasing or sharing any of that information.

“This is a case that cries out for the issuance of a protective order, not a blanket protective order but one that addresses the issue most relevant in this instance,” Newman said.

Newman also ordered the unsealing of search warrant materials, including the supporting affidavits. The judge noted that the protective order will not include information independently discovered or restrict either the government or the defense from addressing information already in the public domain. The prosecutor will submit the proposed order to the court. Murdaugh and his attorney Dick Harpootlian will have the opportunity to review and comment on them.

On July 14 of this year, Murdaugh was indicted on double murder and weapons charges in the June 2021 shooting deaths of his wife, Maggie, and son, Paul.

In announcing the indictment, South Carolina Law Enforcement Division (SLED) Chief Mark Keel described the state’s search for the killer as relentless over the course of just more than a year.

“Over the last 13 months, SLED agents and our partners have worked day in and day out to build a case against the person responsible for the murders of Maggie and Paul and to exclude those who were not,” Keel said. “At no point did agents lose focus on this investigation. From the beginning I have been clear, the priority was to ensure justice was served. Today is one more step in a long process for justice for Maggie and Paul.”

Just 10 days ago, Murdaugh was indicted for alleged fraud and money laundering crimes.

As Law&Crime has reported, the Murdaugh family is a noted dynasty in South Carolina’s legal community. Paul Murdaugh’s grandfather, great-grandfather and great-great grandfather served as elected prosecutors in South Carolina’s Lowcountry region. Alex Murdaugh’s online biography described him as a “part-time Prosecutor for the 14th Judicial Circuit,” though — unlike previously generations of his family — he was never elected to such a post.

Murdaugh was disbarred in July.

Matt Naham and Aaron Keller contributed to this story.