Inmate Charged in Cold Case Killings Allegedly Beat, Bound, and Raped a Woman, ‘Likely Shot Her Child to Death in Front of Her’ 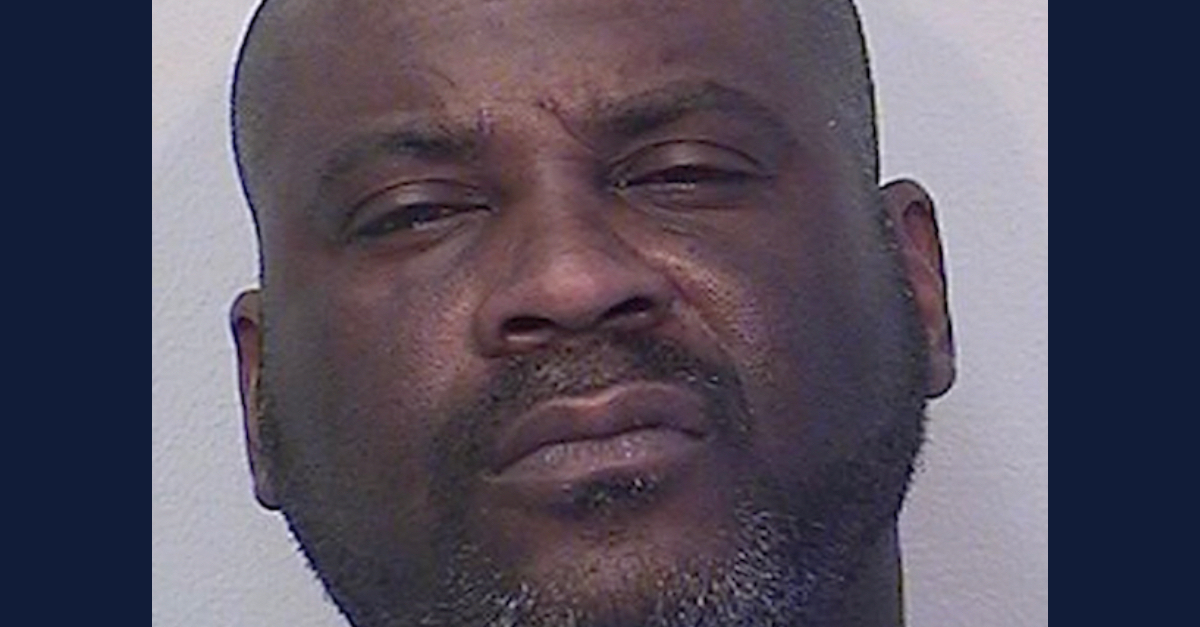 Prosecutors in Washington state say that an incarcerated man in California is behind the brutal 1994 cold-case murders of a 23-year-old mother and her 3-year-old son. 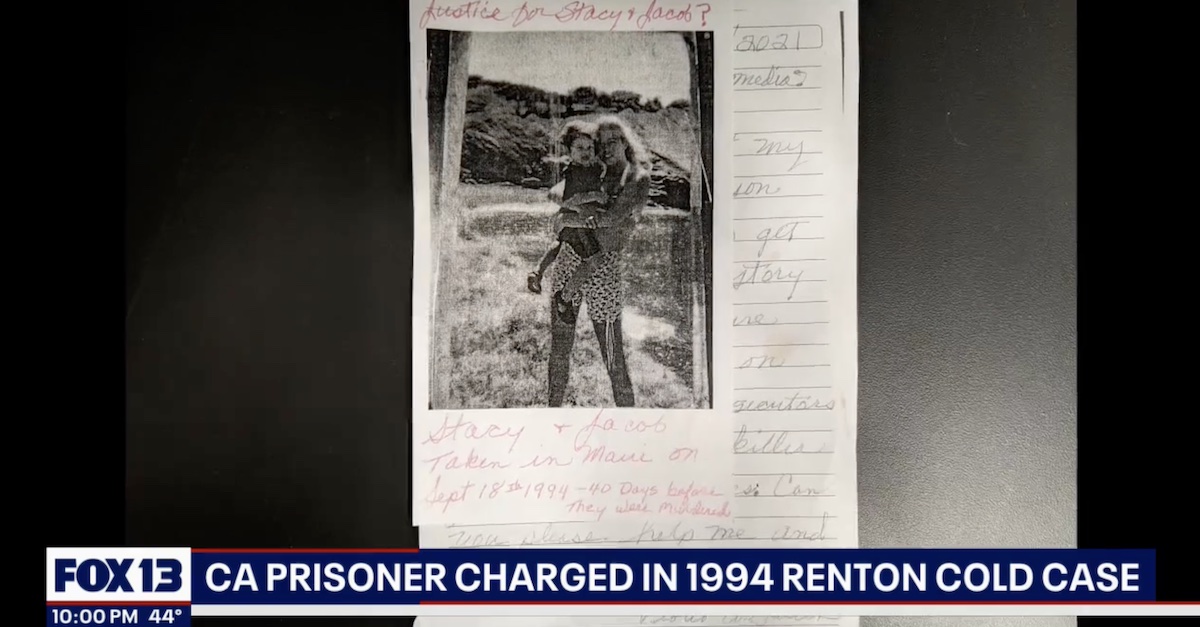 “In this case, the defendant bound Stacy Falcon-Dewey, beat her, orally raped her and likely shot her child to death in front of her before killing her,” Senior Deputy Prosecuting Attorney Jessica M. Berliner wrote in a case summary filed Tuesday in King County Superior Court. “The extraordinary violence and cruelty of these murders demonstrates the extreme danger he presents to society.”

According to a probable cause affidavit, a Seattle Times newspaper delivery person on Oct. 28, 1994 called 911 after discovering a woman’s body at the end of a remote dead end street in Renton. Officers with the Renton Police Department responded and discovered the bodies of Stacy and Jacob “lying in the middle of the roadway” next to Stacy’s Buick.

“Jacob was lying on his mother’s legs, on his left side,” per the affidavit. “Both had obvious gunshot wounds.”

Investigators recovered five .38mm cartridge casings from the scene, three near the bodies and two inside of the car.

The King County Medical Examiner’s Office performed an autopsy and determined that both deaths were homicides. Stacy’s cause of death was a gunshot wound to the back of the head, though she also sustained two other gunshot wounds, one to her left arm and another to her left shoulder. Jacob was shot in the head two times, once “at close range.” 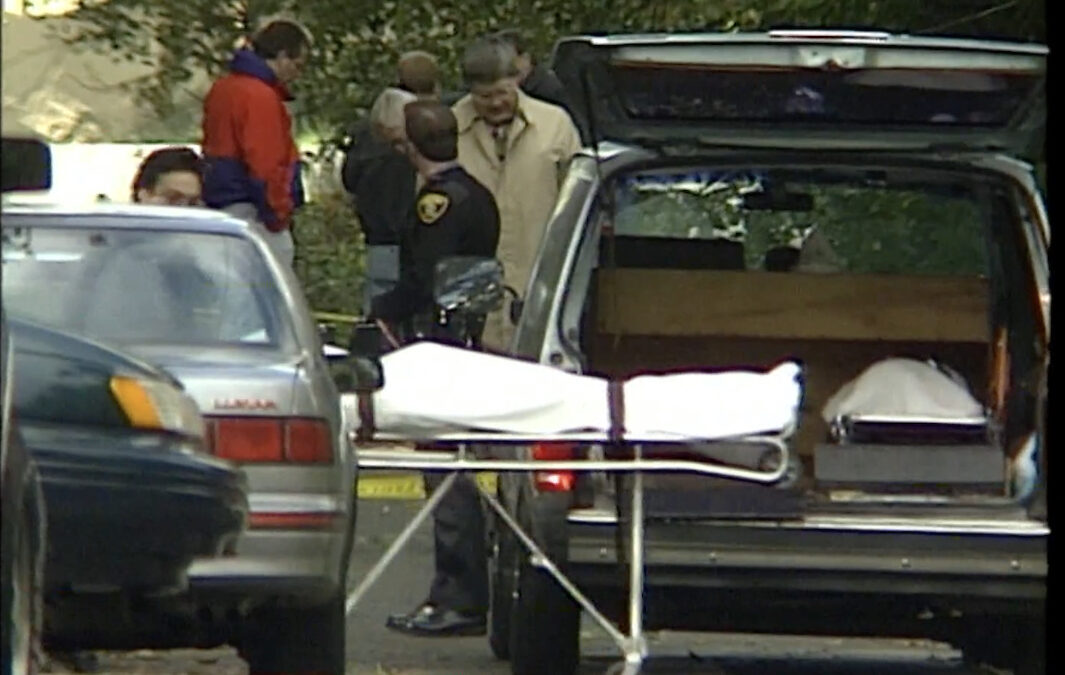 Investigators on scene of 1994 murder of Stacy Falcon-Dewey and Jacob Dewey (KING-TV screengrab).

Investigators said evidence at the scene indicated that there was a struggle both inside and outside of the vehicle and suggested that the killer was searching for something. The contents of Stacy’s purse had been tossed about the car and numerous items had been thrown out of the passenger side door onto the street, including buttons from Stacy’s shirt and “circular sections of light brown packaging tape that were found shaped in a manner consistent with use as a binding.”

Putting together a timeline, police determined that Stacy picked up Jacob from a babysitter’s apartment at the Kenton Ridge Apartment complex — where Stacy and Jacob had lived — between 1:20 a.m. and 2 a.m, less than five miles from where they were murdered. Two people who lived nearby told police that they heard what sounded like gunshots just after 2 a.m.

Despite extensive investigatory work, detectives were unable to come up with a suspect or person of interest in the case for nearly a decade. Due to advances in DNA and genetic testing, however, police in 2001 sent several pieces of evidence collected from the crime scene to the Washington State Patrol Crime Lab. The evidence included fingernail clippings and swabs of male semen obtained during Stacy’s autopsy. The male DNA profile was allegedly found to be a match to Jones, who was in a California prison for a 1995 murder.

Investigators said they then confirmed that Jones had lived at the Kenton Ridge Apartment complex at the same time as Stacy and Jacob, and that he was in the area on the night of their murders.

Despite the aforementioned evidence, the investigation did not move forward until two decades later. The Seattle Times reported that the case “languished for years amid delays, budget cuts and other procedural hiccups.” It reportedly wasn’t until a 2019 Times podcast called “In the Dark” examining the case that the victims’ family learned about the DNA evidence linking Jones to the murder.

In December 2021, police learned that semen was detected on the jacket Jacob was wearing when he was killed. A swab was tested and came back as a match for Jones, per the affidavit. The lab report stated that it was “3.6 nonillion (10^30) times more likely to observe this DNA profile if it originated from Jerome Jones rather than an unrelated individual selected at random from the U.S. population.”

Both DNA samples were then confirmed to match a DNA reference sample obtained from Jones, per the affidavit.

If convicted as charged, Jones would serve a mandatory sentence of life in prison without the possibility of parole—on top of the decades-long sentence he’s already serving.

Read the court filing below.