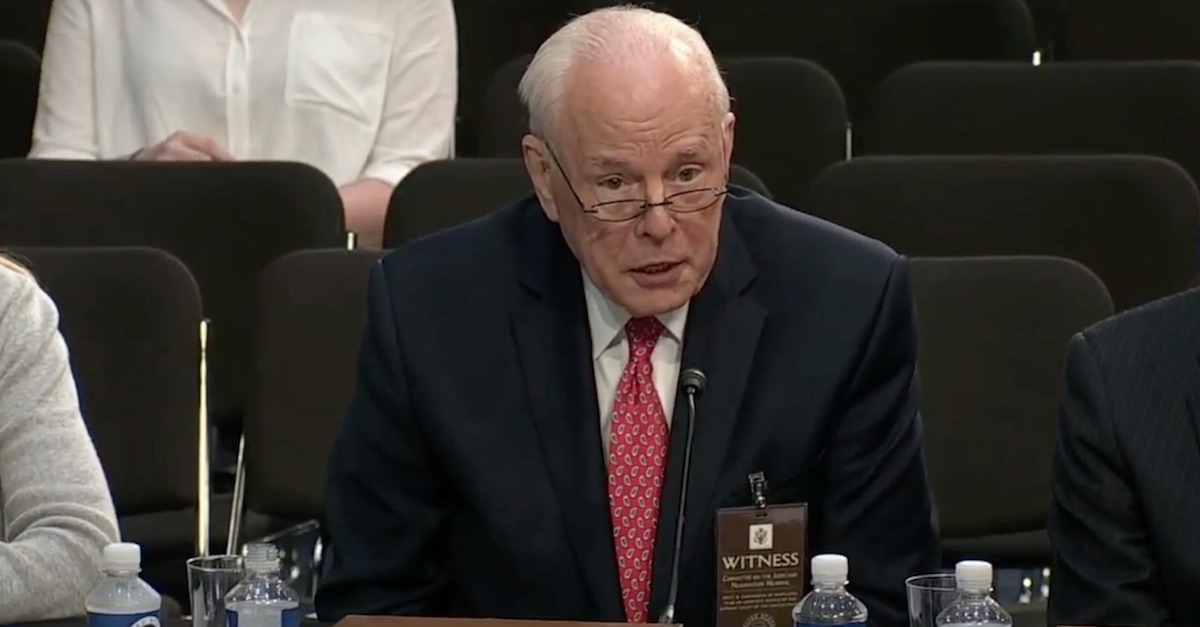 Since Former President Donald Trump announced his intention to file a class-action First Amendment lawsuit against Facebook, Twitter, and Google on Wednesday, Legal Twitter has been awash in jokes over the fatal flaws of such a lawsuit. The pace of the criticism quickened after Wednesday’s round of evening cable news programs.

Many are focusing on the absurd commentary of Alan Dershowitz, who proclaimed the case on Wednesday to be “the most important First Amendment case of the 21st century.”  Dershowitz told Fox’s Sean Hannity that Trump’s case “pits freedom of speech on the one hand against the First Amendment on the other hand” — as if that makes sense — because “high-tech giants . . . are banning freedom of speech” through actions that Dershowitz coined “the new censorship.”

The First Amendment, of course, is what guarantees freedom of speech in the United States. But like other freedoms guaranteed by the Bill of Rights, free speech is limited. The Amendment only forbids censorship of protected speech when that censorship is carried out by the government in an illegal manner. Dershowitz and others may wish to liken a Twitter ban content-based regulation of protected speech, but dubbing it “new censorship” does not make it so.

Legal Twitter — and several politicians — were quick to point out the fallacies in Professor Emeritus Dershowitz’s bad legal take.

Tomorrow I’m suing Fox News for not having me on every day, and the NY Times for not publishing my OpEds, because First Amendment.

Awww, just kidding. Unlike delusional Dershowitz, I read the First Amendment and it does not apply to private sector companies. https://t.co/rispvQuxDk

In case you needed any further evidence that Dershowitz is deliberately deceiving the public. Any first year law student could tell you that Trump’s lawsuits lack merit. https://t.co/f094pYCyop

John Dean, Former Chief White House Counsel under President Richard Nixon, had some other thoughts on the matter, though. Diverting from the chorus of lawyers calling for a quick and easy dismissal of Trump’s purported claim, Dean suggested via Twitter that the case could involve “a nationally televised deposition.”

“Please schedule it next week,” he goaded the litigants.  “Don’t move to dismiss, which would be the normal move.”

This should be a nationally televised deposition…. Please schedule it next week. Don’t move to dismiss, which would be the normal move. Make him deal with the trap he created for himself. He will lose on the merits! https://t.co/fg46WsEXKV

Dean, who testified as a whistleblower against Nixon during the Watergate hearings in 1973, has been a frequent Trump critic.  Former Trump-fixer Michael Cohen has even gone so far as to liken himself to Dean in court filings.

Although allowing Trump’s case to proceed through discovery would certainly be a costly proposition for the media company defendants, the allure of a Donald Trump deposition relating to the events of January 6th could certainly be tempting. Deposing a plaintiff would be standard practice in such a case, and even though the events related to the Jan. 6th siege on the U.S. Capitol Complex are directly relevant to Trump’s suspension from various social media sites, the questions put to Mr. Trump would be wide-reaching, as there is no requirement that attorneys limit their inquiries in the same manner that would be required at trial.  Furthermore, now that Trump is no longer a sitting president, he will be unable to invoke the Clinton v. Jones rule that the court need be deferential to his schedule.

It seems that Trump himself has already contemplated a deposition. In an interview with Bill O’Reilly Wednesday, the former president said he would “look forward” to a deposition in the case.

“Are your lawyers prepared for a war?” O’Reilly asked.

“Their defense is going to be that you incited the capitol riot,” O’Reilly predicted. “How will your attorneys handle that?”

Of course, the more likely course of action isn’t that Facebook, Twitter, and Google will defend their actions on the basis that Trump incited the Jan. 6th riot.  Rather, their immediate course of action will almost certainly be to argue that the selected form lacks personal jurisdiction over the defendants.  And then there’s choice of law.  Facebook’s terms of service, for instance, require all disputes to be “resolved exclusively in the U.S. District Court for the Northern District of California or a state court located in San Mateo County.”  The next course of action for the big tech companies will likely be to point out that Trump has failed to state a valid claim because none of the defendants are government actors limited by the First Amendment.

Even if the case proceeded to a point at which a court considered the merits, the issue would not be nearly as simple as Trump has made it out. Each company utilizes terms-of-service rules, and they function as a binding contract.  Given Trump’s public communications before, during, and after the January 6th insurrection, the companies would almost certainly argue that Trump agreed to allow his account to be suspended if he used it in a manner which ran afoul of the various terms of service — which they have all concluded that he did.

O’Reilly then quizzed Trump directly on the matter of saying things under oath.

“They’re going to want to take a deposition from you. You gonna sit for a deposition?” he asked.

It’s worth pointing out — again — that any deposition would not be limited to questions about the election.

Trump’s bravado in this litigation may be attributable to geography and judicial appointments.  Trump filed his lawsuits in federal courts in Florida.  Issues which arise in those courts are appealed to the U.S. Court of Appeals for the Eleventh Circuit. During his tenure as president, Trump appointed six of the 12 current judges on the Eleventh Circuit. Of the other six, four were appointed by Barack Obama, one by Bill Clinton, and one by George W. Bush.