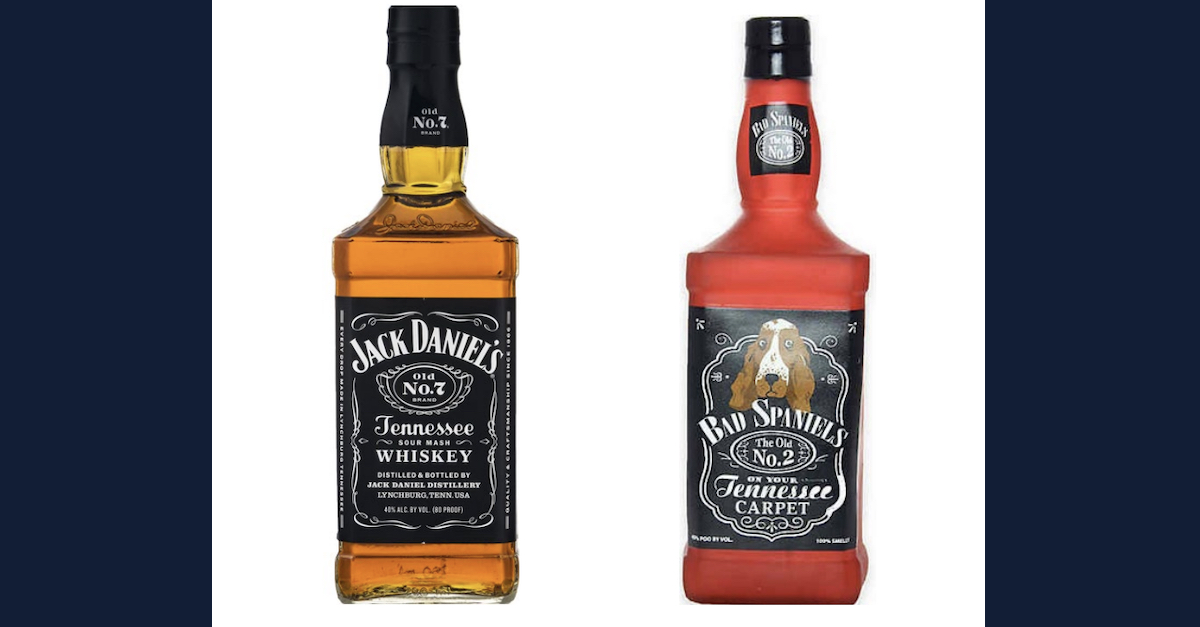 The U.S. Supreme Court on Monday added one case to its oral argument calendar for the current term: a trademark dispute between Jack Daniel’s and a dog toy maker with a taste for the scatological.

Stylized as Jack Daniel’s Properties Inc. v. VIP Products LLC, the storied liquor seller has been facing off against one particular purveyor of rubber dog chew toys since September 2014.

In July 2013, VIP introduced the Silly Squeakers “Bad Spaniels” rubber squeaky toy. The toy is shaped like a whiskey bottle and features a cartoon spaniel on the front – with characteristically large eyes – as well as the caption: “Bad Spaniels, the Old No. 2, on your Tennessee Carpet.” The bottom of the toy continues the fecal-theme and says: “43% POO BY VOL.” as well as “100% SMELLY.”

Importantly, the back of the toy’s label explicitly disclaims: “This product is not affiliated with Jack Daniel Distillery.”

As the litigation passes well into year eight, both sides have notched wins with the U.S. Court of Appeals for the Ninth Circuit, and once even temporarily agreed to call off the legal beagles while the nation’s high court weighed considering the facts and law – back in 2020.

The nine justices declined to pick up the case then, however, and in October 2021, a district court in Arizona ruled in favor of the dog toy maker defendants, finding the whiskey maker plaintiffs had failed the relevant tests that control trademark law in the 9th Circuit.

“Here, while VIP heavily imitated [Jack Daniel’s] trade dress, it also altered nearly every element with its own expressive content,” the court noted. “As a result, the Bad Spaniels Toy is more similar to [a] mashup.”

Here, the Bad Spaniels Toy similarly alters JDPI’s trade dress in a way that creates new expressive content. It also identifies itself as a Silly Squeaker toy on the label, and it disclaims any association with Jack Daniel’s. While the “Silly Squeakers” label is partially obscured and the miniscule disclaimer on the back of the label is difficult to see, the combination of these elements with the new expressive content is enough to remove the Bad Spaniels Toy from the “outer limits” of the Rogers test identified in Gordon and force the court to conclude as a matter of law that the Bad Spaniels toy is not explicitly misleading.

“[T]he ‘explicitly misleading’ standard essentially displaces the likelihood-of-confusion test with a standard that excuses nearly any use less than slapping another’s trademark on your own work and calling it your own,” the district court continued. “The likelihood-of-confusion test provided a multi-factor consideration of the effects of a junior use on a senior user’s mark; the explicitly misleading test is unconcerned with the real-world effects on a senior user’s mark. Thus, while [Jack Daniel’s] finds the depiction of a dog relishing a bowel movement on a carpet distasteful and an abuse of its mark, in the final analysis, [Jack Daniel’s] has no means to protect the viability of its trademark.”

In their petition for writ of certiorari, Jack Daniel’s argues that lower court decisions in the toy manufacturer’s favor were “egregiously wrong” and that they clash with the “structure” of the federal law establishing the U.S. copyright regime.

“Nothing in established trademark doctrine or the First Amendment supports the Ninth Circuit’s scale-tipping solicitude for ‘humorous’ commercial products,” the petition says. “The Ninth Circuit’s reasoning means that virtually any humorous pirating of a trademark will be ‘expressive’ and thus qualify for heightened First Amendment protection, no matter how misleading.”

Jack Daniel’s also complains about the “tiny” size of the font used in the disclaimer on the VIP poop-affiliated chew toy.

That complaint is highlighted in VIP’s reply brief:

JDPI complains that VIP’s Bad Spaniels Silly Squeaker bore on its hang tag a disclaimer of affiliation in too small a font, Pet. 12, but that is irrelevant. “There is no requirement that the cover of a parody carry a disclaimer that it is not produced by the subject of the parody, and we ought not to find such a requirement ….” This is not a case where someone claimed a parody just by using the claimant’s mark on an inapt product—VIP did not put “Jack Daniel’s” on a dog toy as the sum total of the would-be parody. That Bad Spaniels Silly Squeaker is a parody is obvious from “Bad Spaniels,” the cartoon dog, and the other humorous transformations of the original.

The toy maker goes on to say the real issue isn’t about the state of foundational trademark law – or whether the right test was applied – at all. Rather, VIP claims, it’s about First Amendment principles.

“This case is not really about confusion,” the VIP brief argues. “It is about trademark owners who do not like being parodied—however gently—and do not enjoy that their brands’ iconic character makes them subject to parody that they cannot control.”

[Image via Jack Daniel’s petition for writ of certiorari]