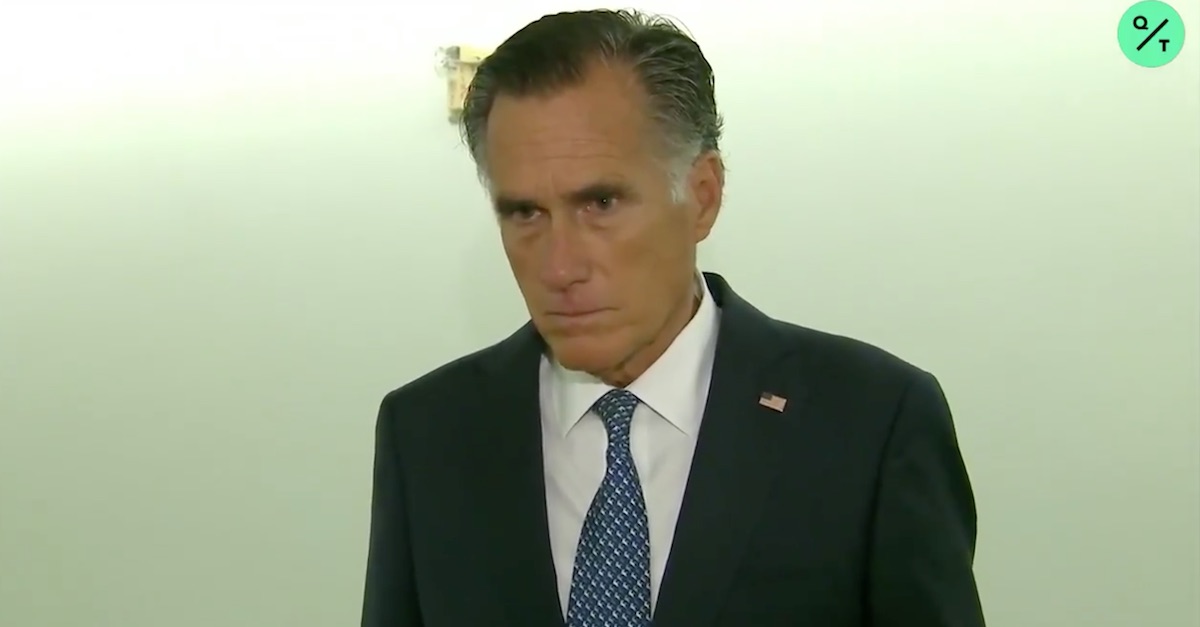 It wasn’t so long ago that Mitt Romney (R-Utah) was the lone Republican in the Senate to convict President Donald Trump on an abuse of power charge at the end of the impeachment trial over the Ukraine affair. “The president is guilty,” Romney declared, causing many on the left to briefly marvel at a voice crying out in the wilderness—transcending lockstep party politics in favor of principle despite retaliatory threats. Several months later, in the aftermath of Supreme Court Justice Ruth Bader Ginsburg’s death and at the beginnings of a deeply partisan fight, Romney released a statement saying that President Trump should get to pick Ginsburg’s replacement—all but ensuring that will happen. Romney appealed to the notion of “immutable fairness.”

My statement regarding the current Supreme Court vacancy: pic.twitter.com/6YO0dPWWXc

“My decision regarding a Supreme Court nomination is not the result of a subjective test of ‘fairness’ which, like beauty, is in the eye of the beholder. It is based on the immutable fairness of following the law, which in this case is the Constitution and precedent. The historical precedent of election year nominations is that the Senate generally does not confirm and opposing party’s nominee but does confirm a nominee of his own,” Romney said, clearly attempting to draw a distinction between the current situation and then-President Barack Obama’s nomination of Merrick Garland to fill Antonin Scalia’s seat.

Garland never got a hearing despite being nominated well before the election and Senate Majority Leader Mitch McConnell (R-Ky.) called it, perhaps, his proudest moment in life. McConnell famously refused to move forward with Garland’s nomination with the famous words that “the American people should have a say in the court’s direction.” He later said one of his “proudest moments” was when he “looked Barack Obama in the eye” and told him “you will not fill the Supreme Court vacancy.”

“The Constitution gives the president the power to nominate and the Senate the authority to provide advice and consent on Supreme Court nominees. Accordingly, I intend to follow the Constitution and precent in considering the president’s nominee. If the nominee reaches the Senate floor, I intend to vote based upon their qualifications,” Romney said.

Romney is correct that the Constitution says the president shall nominate and, by and with the Senate’s advice and consent, appoint a Supreme Court justice. There is nothing in that Constitution that says the Senate shall not consider a SCOTUS nominee in an election year. Put simply, the president and the GOP-led Senate have the power to do exactly what they are doing. But there isn’t a clause either that says that if it’s an election year and the president and the Senate are controlled by the opposing parties, a nominee should not get a hearing.

On the night the world learned of Ginsburg’s death, Sen. McConnell said that President Trump’s nominee “will receive a vote on the floor of the United States Senate.” The president followed that up on Saturday by saying it was the GOP’s “obligation” to nominate and confirm a justice (in 2016, conservative law professors noted that the Constitution outlines no such “obligation” for the Senate to consider a nomination).

There is a long list of Republicans who said in 2016 that it should be left up to the American people to decide which party got to pick the next justice. No one expressed that viewpoint more clearly than Sen. Lindsey Graham (R-S.C.).

“I want you to use my words against me. If there’s a Republican president in 2016 and a vacancy occurs in the last year of the first term, you can say Lindsey Graham said let’s let the next president, whoever it might be, make that nomination." pic.twitter.com/quD1K5j9pz

Romney’s fellow Republican senator from Utah, Sen. Mike Lee, has even gone on record to say that the Senate GOP’s decision to flat-out ignore Garland’s nomination amounted to advice and consent.

“In 2016, President Obama nominated a replacement for Justice Scalia and my Senate colleagues and I gave our advice and consent on the nominee, consistent with the Constitution, by rejecting him,” Lee said. “This year, President Trump will nominate a replacement for Justice Ginsburg and, consistent with the Constitution, we will again give our advice and consent. If we like the nominee, we will confirm her. If we don’t, we won’t. It’s that simple.”

After releasing his Twitter statement on Tuesday morning, Sen. Romney was asked what he sees as important qualifications for a potential Supreme Court nominee.

“Someone who has a record of fairness and judgment,” he said.

.@SenatorRomney said he's looking for these qualifications in a potential Supreme Court nominee:

– "an expert in the law"
– "record of fairness and judgement"
– "a strict constructionist" pic.twitter.com/m3diLnfQC8

The progressive left immediately responded to Romney’s statement by accusing him and the Republican party of orchestrating a hypocritical power grab.

This is not about principle-it’s always been about power. Progressives need to be comfortable with the acquisition-and use-of power. We will be faced with serious questions after the election; we must use the power we have to create systems reflecting the interests of the people. https://t.co/ib3ltrzhfZ

How embarrassing he is. The history that’s relevant here is Romney’s vote to convict the President on the articles of impeachment as unfit for office this year. He’s unfit to serve, but fit to select a SCOTUS justice during the General Election? https://t.co/L3ouls4FU7