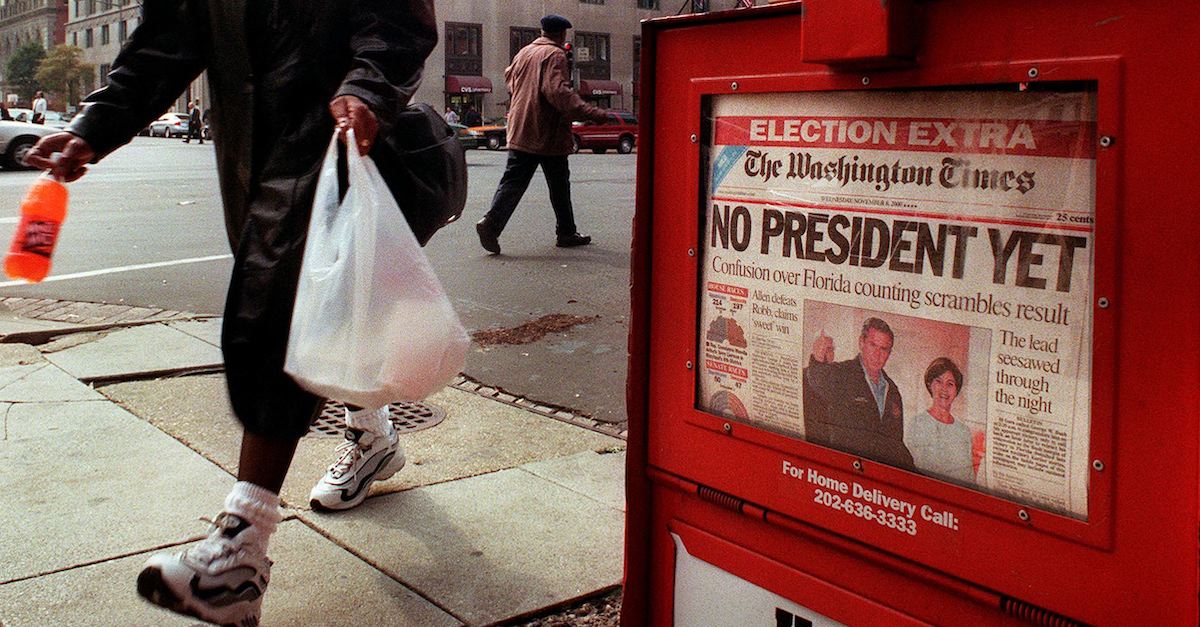 A woman walks by a newspaper box in downtown Washington, DC with the headline showing that the US presidential election is still undecided 08 November, 2000.

An election official in Pennsylvania is cautioning that if the state legislature doesn’t take corrective action immediately, Pennsylvania’s vote-by-mail requirements are going to cause legal chaos that hasn’t been seen since Bush v. Gore.

Philadelphia City Commissioner Chairwoman Lisa Deely sent a warning letter to state GOP leaders Pennsylvania Senate President Pro Tempore Joseph Scarnati III and Speaker of the House Bryan Cutler on Monday, urging them to consider her “a canary in the coal mine.” The Pennsylvania Supreme Court’s recent ruling in favor of the Trump administration’s position on counting “naked ballots,” Deely said, will cause “significant post-election legal controversy, the likes of which we have not seen since FL in 2000.”

“Naked ballots” are mailed in ballots that lack what is known as a “secrecy envelope.”

VOTERS: Secrecy envelopes MUST be used when voting by mail, in this election, and all elections going forward. The PA Supreme Court ruled that any ballots received with no secrecy envelope will be rejected, meaning your vote will not count. Please let others know. pic.twitter.com/apE6DWfbpo

That “secrecy envelope” is an inner envelope that shields the ballot. Historically, as Deely pointed out in her letter, the Philadelphia Board of elections counted naked ballots without bringing them forth for additional consideration; because naked ballots did not require special treatment of any kind, their numbers were not specifically tracked. Therefore, no one is quite certain just how many absentee ballots fell into the “naked” category in past elections. However, Deely estimates that more than 11,000 votes in the June 2020 primary election would have been affected if naked ballots were disallowed.

Last week’s ruling by the Pennsylvania State Supreme Court, though, has promised to upend the entire counting process. A case had been brought by the Pennsylvania Democratic Party over voting rules during the COVID-19 pandemic. While the outcome of the case – allowing for an extension of the absentee ballot deadline, permitting the use of drop boxes, and requiring a residency requirement for poll watchers – was largely a win for Democrats, the court’s ruling on naked ballots was a loss with potentially serious implications.

The court rejected the argument from Democrats that naked ballots should be counted. Justice Max Baer said in his ruling:

Whatever the wisdom of the requirement, the command that the mail-in elector utilize the secrecy envelope and leave it unblemished by identifying information is neither ambiguous nor unreasonable.

In her letter to the president, Deely called the secrecy envelope requirement a “vestige of the past,” and explained that the rule was a “hold over from when Pennsylvania counted ballots at polling places.” Now that vote-counting is done mechanically, voter anonymity is preserved regardless of secrecy envelope.

The secrecy-envelope requirement, argued Deely, is nothing more than “a means to disenfranchise well intentioned Pennsylvania voters.” Furthermore, eliminating the secrecy envelope requirement would cost nothing, and would save the Commonwealth tens of thousands of dollars a year.

The alternative – if the legislature fails to act – practically guarantees that Pennsylvania will “become a source of significant post-election legal controversy, the likes of which we have not see since Florida in 2000,” Deely asserted.

The official said her concern was a non-partisan one:

We are talking about the voting rights of our constituents, whether they be Democrats, Republicans, or independents… As public servants, we owe it to all our citizens to avoid this situation, and the likely chaos that would come with it.

Still, many are predicting that the legislature will be unreceptive to Deely’s warnings.

Btw, the chances of PA’s GOP-led legislature fixing this potentially big issue – or passing a cure provision – before November? Slim to none.

The Trump campaign successfully sued at the PA Supreme Court to invalidate naked ballots – even though thousands were counted in June.

Seriously concerned about the naked ballot ruling in PA. That might actually cost Biden the state.

It’s a good thing AZ and ME-2 seem to be flipping blue, too.

You can read the full letter here:

In a letter to GOP state leg leaders, an election official warns 100K PA voters could be disenfranchised b/c of a ruling rejecting naked ballots. It “set PA up to be the subject of significant post-election legal controversy, the likes of which we have not seen since FL in 2000.” pic.twitter.com/3ml96W00EX