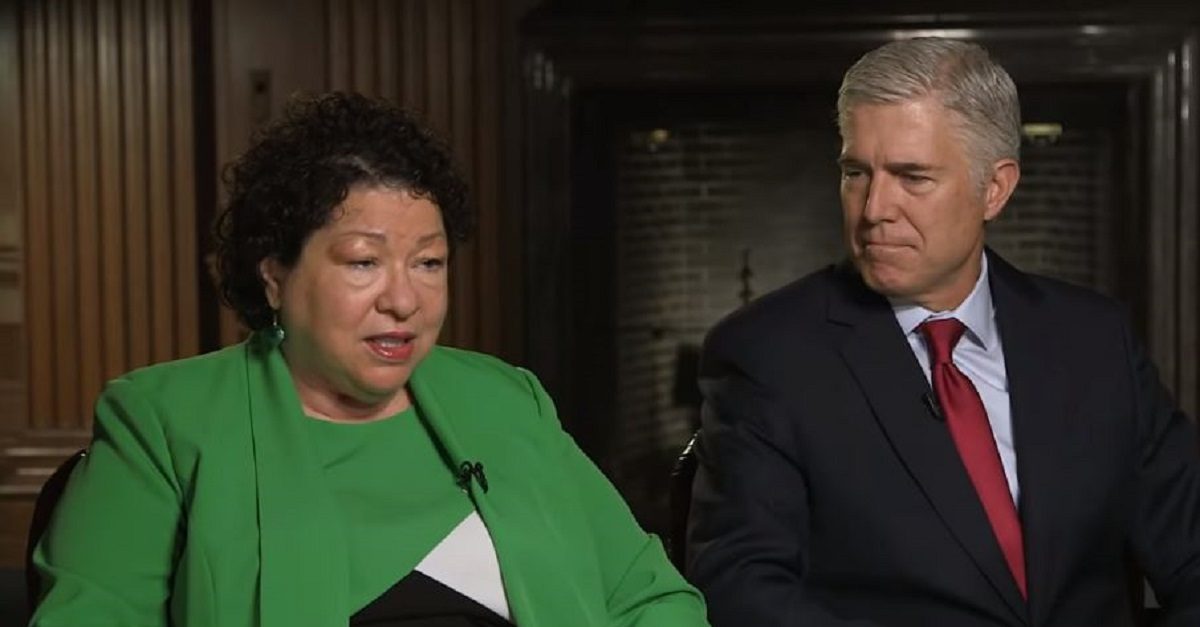 The Supreme Court of the United States issued an order list on Monday morning which contained an increasingly common occurrence: Justices Sonia Sotomayor and Neil Gorsuch banding together in order to opine on what they view as the need for criminal justice reform.

The underlying case concerns Martin Longoria, who, in 2018, was indicted for the crime of “being a felon in possession of several firearms,” according to the U.S. Court of Appeals for the Fifth Circuit.

Longoria challenged the government on Fourth Amendment grounds by noting that the FBI had searched his apartment without a warrant. The defense moved for suppression as a remedy for the alleged constitutional violation but the district court denied the motion because it found that Longoria’s wife had consented to the search.

Instead of pleading guilty, the defense and the prosecution agreed on a stipulated bench trial. Which, in effect, can often be considered tantamount to a guilty plea. The constitutional right to a jury is waived and, instead of outright pleading guilty, the government and a criminal defendant agree on the facts underlying the case which allows a judge plenary power to determine guilt or innocence.

In Longoria’s case, the decision to sign off on a stipulated bench trial was made in order to retain his Fourth Amendment-based suppression challenge regarding the FBI’s warrantless search.

Longoria was found guilty and, despite the suppression issue, his case now concerns sentencing under the federal guidelines.

The prosecution’s pre-sentencing report argued for a base level of 20, which is in the lower level of the highest “zone” considered by judges when sentencing federal criminal defendants. Additionally, the prosecution argued for various enhancements which, in sum, would have resulted in a lengthy prison sentence of between five and six-and-a-half years in prison. The judge gave Longoria the full sentence available under the guidelines. Longoria appealed.

The discrete legal issue before the nation’s high court is the proper interpretation of §3E1.1(b) of the guidelines, which is commonly known as the “Acceptance of Responsibility” section.

The government declined to entertain Longoria’s request for the one-point reduction—which can be equivalent to several years in prison depending on the case—because they had to prepare for his suppression hearing. In the prosecution’s argument, preparing for that “full-blown suppression hearing” was the equivalent of preparing for an actual trial, even though the hearing only lasted one day, and therefore the government’s “resources” were not spent effectively. The government did not argue that Longoria’s bench stipulation trial should not be considered equivalent to a guilty plea.

The Fifth Circuit agreed with the government. The panel of bipartisan judges (appointed by former presidents George W. Bush, Barack Obama and Donald Trump) based their reasoning on a former case which held that a “suppression hearing [could be] in effect the substantive equivalent of a full trial.”

Longoria appealed to the Supreme Court, pointing at a 2013 amendment to the guidelines which says that “[t]he government should not withhold [an acceptance of responsibility] motion based on interests not identified in § 3E1.1, such as whether the defendant agrees to waive his or her right to appeal.”

Notably, Longoria also cited this amendment in his original appeal—but the Fifth Circuit chose to ignore the plain language of the text because the “amendment does not clearly overrule” the conditional precedent cited to deny leniency for criminal defendants in the notoriously conservative circuit.

The justices denied to hear Longoria’s case as well—effectively agreeing with the Fifth Circuit and leaving the sentence intact. Sotomayor and Gorsuch issued a statement that is not a dissent, but rather a commentary expressing the idea that the Supreme Court should weigh in on the subject for the sake of uniformity at least.

Justice Gorsuch joined Justice Sotomayor today in a “statement” in a criminal case. Why the odd bedfellows? Bec Gorsuch, like Scalia before him, believes that laws/regs used against criminal defendants must be clear + uniform. https://t.co/eiKlgNKUrw

This petition implicates an important and longstanding split among the Courts of Appeals over the proper interpretation of §3E1.1(b). Most Circuits have determined that a suppression hearing is not a valid basis for denying the reduction, reasoning that “preparation for a motion to suppress is not the same as preparation for a trial,” even if “there is substantial overlap between the issues that will be raised.” A minority of Circuits have concluded otherwise. In this case, for example, the Fifth Circuit accepted the Government’s refusal.

So, why not a full dissent?

Because they want the U.S. Sentencing Commission to have an actual chance at “clearly” overruling the Fifth Circuit first.

“The Sentencing Commission should have the opportunity to address this issue in the first instance, once it regains a quorum of voting members,” Sotomayor wrote. “The present disagreement among the Courts of Appeals means that similarly situated defendants may receive substantially different sentences depending on the jurisdiction in which they are sentenced. When the Commission is able, it should take steps to ensure that §3E1.1(b) is applied fairly and uniformly.”

A footnote explains the crux of the matter here: “Currently, six of the seven voting members’ seats are vacant. The votes of at least four members are required for the Commission to promulgate amendments to the Guidelines.”