Justice Sotomayor on Justice Thomas: ‘I Can Be Friends with Him and Still Continue Our Daily Battles’ 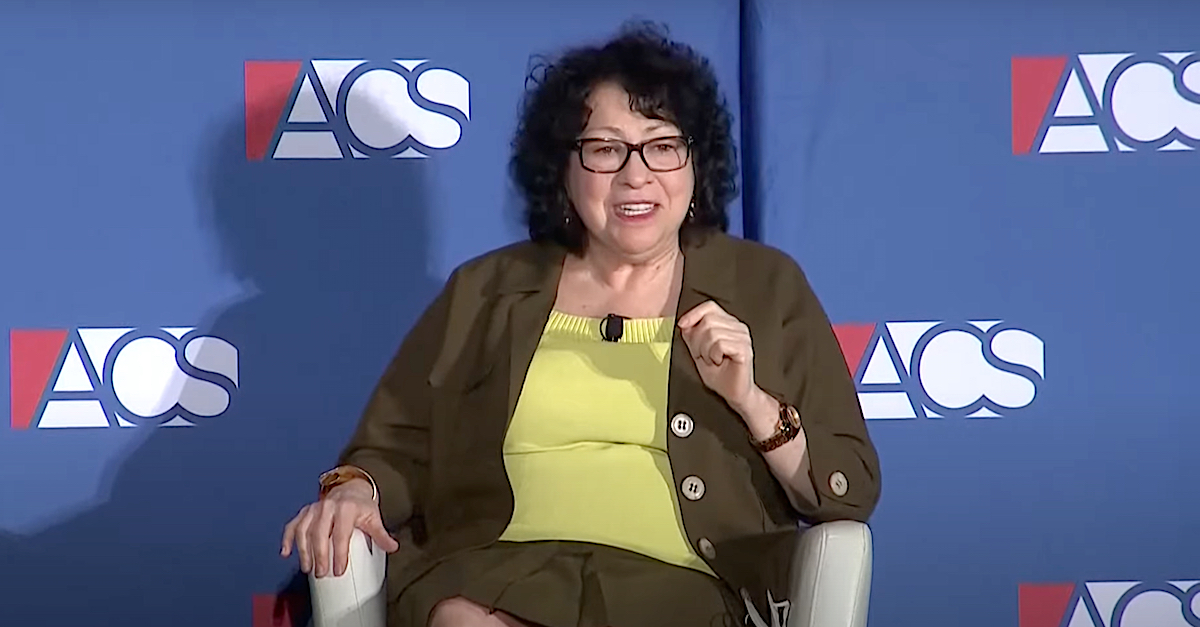 Justice Sonia Sotomayor on Thursday heaped personal praise on fellow Justice Clarence Thomas at a speech before the American Constitution Society, a liberal legal group, shedding some light on how two Supreme Court justices who disagree the most manage to remain friends.

From that speech, portions of which were reported by Reuters:

Justice Thomas is the one justice in the building that literally knows every employee’s name. Every one of them. And not only does he know their names, he remembers their family names and histories. He is a man who keeps — cares deeply about the court as an institution, about the people who work there, but about people. That’s why I can be friends with him and still continue our daily battles over our difference of opinion in cases.

The comments were in part a response to a discussion on the book “Scorpions” about contentions among past Supreme Courts. Sotomayor noted that the late Ruth Bader Ginsburg reacted to the book by pointing to the first female justice, Sandra Day O’Connor, who gathered the justices for lunch after arguments and instituted movie nights. Those simple measures, Ginsburg said, added to the collegial professionalism of the court and ensured that disputes did not become personal.

Sotomayor also discussed, in generalized terms, the current state of affairs on the court:

There are days I get discouraged. There are moments where I am deeply, deeply disappointed. And yes there have been moments where I’ve stopped and said, “Is this worth it anymore?” And every time I do that, I lick my wounds for a while, sometimes I cry, and then I say, “okay.” [Brushes off shoulders.] “Let’s fight.”

The overall tone of the speech suggested that the court could “make mistakes” — some of which have been remedied over time.

“Institutions are made up by human beings,” Sotomayor said after the event moderator noted that Gallup polls have shown that faith in the court has plummeted. “Because we are human, by necessity we make mistakes.”

She continued with a historical example:

Dred Scott lost his 11-year battle for freedom in the courts, and he died a year after Dred Scott was decided. Yet he won the war. And so that’s why I think we have to have continuing faith in the court system, in our system of government, in our ability — I hope not through war, but through constitutional amendment to change in legislation, towards lobbying, towards continuing the battle each day, to regain the public’s confidence that we as a court as an institution have not lost our way.

Sotomayor said she believed Dred Scott was “one of the worst decisions” the Court has ever issued. While she said it was “hyperbole” to assume that the decision “caused” the Civil War, she did admit that the decision was “used on both sides of the Civil War to motivate their respective adherents to fight a just war.”

The Civil War, she said, resulted in the 13th, 14th, and 15th Amendments — which directly upended the core rulings of the Dred Scott decision.

“It took a war” to undo Dred Scott, Sotomayor said. But she also opined that Dred Scott “won the war” because the system eventually recognized the justness of his arguments — albeit posthumously.

“If we disagree, we will continue the battle to do justice,” the justice continued. “I truly believe in a magical world. The arc of the universe bends toward justice. And I can’t keep going unless I believe that, and I have to inspire all of you to continue believing it.”

The U.S. Supreme Court’s ‘mistakes’ in high-profile cases can be corrected over time, according to Liberal Justice Sonia Sotomayor https://t.co/8u88h0SqtZ pic.twitter.com/BR8OZhcsw8

As is the usual practice for Supreme Court speeches, Sotomayor agreed not to discuss the particulars of any case or political ideology, but she did tiptoe around some of the hot-button issues of the day. Pursuant to that generally recognized rule of engagement, Sotomayor explained why such avoidances were important:

There is a need in lawyers and in everyone who comes into the contact with the judicial system to genuinely believe that the judge that you’re appearing before does have an open mind. What does that mean? You can’t ask a judge to have studied legal issues the way we do in case after case — and having read the briefs in a case before him or her, having read all of the lower court opinions that have described, and opined on those legal issues — you can’t expect that judge not to have an inclination of the way they think they will rule. Because you have to have a working hypothesis when you enter oral argument — or you’re listening to people before you — to be able to ask intelligent questions about what the holes might be in their argument, or what the strengths might be, at — but — what weaknesses those strengths will engender in other cases. So, with all of that background, you go in realistically knowing the judge is of a mind. But you need to believe, and you should rightly believe, that a judge can be convinced — if not by your argument, especially before the Supreme Court — by the questions of my colleagues, by our discussion at conference, and it doesn’t mean that any of our votes necessarily change at the end of the argument, but it does mean that we have an open mind.

Sotomayor continued by saying she doesn’t “participate in prejudging cases by talking about political issues and my views on them” and that she doesn’t “use the media and this sort of rhetoric to try to convince my colleagues.”

Sotomayor said she was but “one voice” who would “vote if the issue comes before me.” Rather, she urged those listening to act: she said her audience’s voices wouldn’t count “unless you [the public] form the opinions” an “do something.”

If you think the court’s going the wrong direction, then you have to work at making the changes to get it on the right course, whether through legislation or whatever methods are necessary in terms of lobbying, do it. But I think justices and judges might have oversized voices about what right answers can be. Us opinion on it ultimately hurts public confidence.

The host of the event clarified that Sotomayor was suggesting that the public’s focus should be on action rather than on trying to peer into the inner workings of the court — which have been laid on display recently through the leak of Samuel Alito’s draft opinion on a major abortion case and recent claims of a “heated fight” among the justices surrounding 2020 election litigation.

The full speech is below: