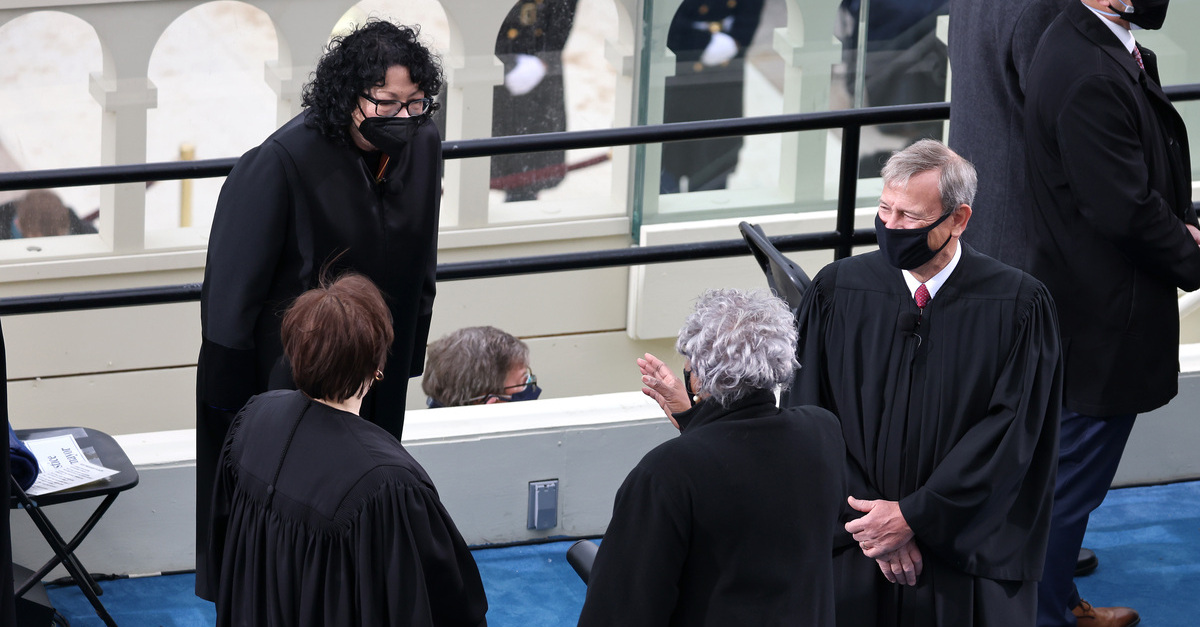 The Supreme Court of the United States heard oral arguments in an abortion case about the ability of a lone state official to defend a law that has already been ruled unconstitutional even when the broader state apparatus of government has given up on defending the law in question.

Stylized as Cameron v. EMW Women’s Surgical Center, the outcome of the case could eventually allow Kentucky to enforce H.B. 454, a 2018 law which effectively bans abortions after 15 weeks.

As Law&Crime previously reported, the case before the nation’s high court does not yet address the substance of the law itself but will instead clear up the procedural issue of whether the Blue Grass State’s Attorney General Daniel Cameron (R) can intervene in the litigation and potentially revive the law against the wishes of pro-abortion Gov. Andy Beshear (D) and reproductive rights advocates like the American Civil Liberties Union.

The discrete issue leading to the legal controversy here arose when the women’s center challenged the law and named the former attorney general as one of the defendants. Instead of defending the law, the attorney general sought and obtained dismissal from the suit–agreeing the Kentucky Office of the Attorney General would be bound by the final judgment. Since then, two federal courts have found the law unconstitutional. Cameron eventually attempted to re-enter the case and was summarily denied by the U.S. Court of Appeals for the Sixth Circuit.

For Sotomayor, however, the case appeared to be an easy call in precisely the opposite direction.

“That’s correct,” replied Kuhn, a Federalist Society member. “As someone who can enforce the challenged law.”

“And you said: ‘We can’t,'” Sotomayor dug in, presenting her theory of the case. “And you signed a stipulation dismissing yourself and saying that you would abide by the decision of the secretary of state, its litigation, and abide by whatever judgment was entered in this case–would be bound by any final judgment in the action. Is that correct?”

“That is correct, there are a couple qualifications to that, but, yes, generally,” Kuhn conceded.

“Generally,” Sotomayor repeated. “You didn’t appeal the judgment. Is that correct?”

“Why would we call it an abuse of discretion for a court of appeals–after its rendered its judgment–to say ‘We don’t really care what’s happened in the political arena. We don’t want to be dragged into it?'” Sotomayor asked. “You agreed to be bound by this judgment. You didn’t appeal–even though you were a party. Are you telling me you’re now willing to waive the sovereign immunity of the state? Because that’s what it sounds like.”

The skeptical justice went on to say it seemed as if Cameron was trying to enter the lawsuit as his own separate entity–apart from the state itself.

“Under what theory of law would we be able to say that the Sixth Circuit abused its discretion by respecting the stipulation that you signed?” Sotomayor asked.

After a few moments, Kuhn dodged the direct question and went on to argue that the procedural way the case was presented should make the stipulation no longer applicable.

“EMW acknowledged the Commonwealth was not before the district court,” Kuhn noted. “That acknowledgment, I think, overcomes the stipulation.”

Sotomayor interrupted for a refresher on the law.

“Well, it couldn’t have been before the district court–the state has sovereign immunity, correct?” she asked. But before Kuhn could answer, the justice went on: “So, the state under no circumstance [could have been a defendant], even now on appeal, unless it’s willing to waive sovereignty.”

The discussion about state sovereign immunity interests and the procedural posture went on for a while. Sotomayor ultimately said, “Everyone knows you can’t sue a state, you can sue the officers who enforce the law.” Kuhn also conceded that point.

As this discussion unfolded, however, Chief Justice John Roberts cut in and interrupted Sotomayor and Kuhn to ask a question about what Kuhn understood the nature of “final judgment” to mean.