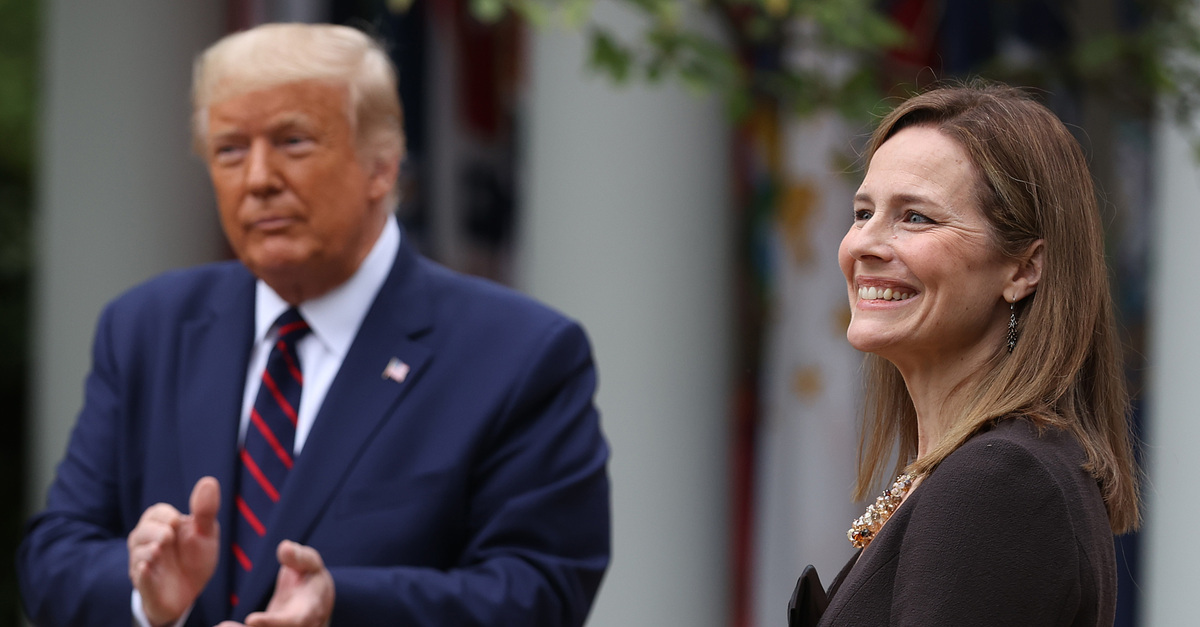 With Amy Coney Barrett’s nomination and presumed confirmation to the Supreme Court on the horizon, Democratic Attorneys General from several states have filed a brief with the high court against the Trump administration’s “gag rule,” teeing up an issue that Barrett has touched on publicly: federal funding of abortion providers.

The AGs began by saying that for 50 years the government has “funded family-planning and reproductive healthcare services for low-income and underserved patients through Title X of the Public Health Services Act.” The Trump administration, however, barred service providers under Title X from “communicating certain abortion-related information to their patients, and requires physical separation of Title X-funded care from healthcare facilities that provide abortion services or certain abortion-related information.”

1. Does the Final Rule violate appropriations statutes requiring that “all pregnancy counseling” in the Title X program “shall be nondirective”?
2. Does the Final Rule violate § 1554 of the Affordable Care Act (ACA), which prohibits HHS from promulgating “any regulation” that creates “unreasonable barriers” to obtaining appropriate medical care; impedes “timely access” to such care; interferes with patient-provider communications “regarding a full range of treatment options”; restricts providers from disclosing “all relevant information to patients making health care decisions”; or violates providers’ ethical standards?
3. Is the Final Rule arbitrary and capricious, in violation of the Administrative Procedure Act, including by failing to respond adequately to concerns that (a) the rule requires medical professionals to violate medical ethics and (b) the counseling restrictions and physical-separation requirement impose significant costs and impair access to care?

The first question asks whether restricting what doctors and providers can say to patients violates “decades of consistent practice under Title X” enacted by Congress to offer “neutral and complete information without steering the patient towards any particular option.”

As Law&Crime noted before, the Trump administration rule blocked health providers from receiving any Title X family planning program funding if they refer abortion to mostly low-income patients. This rule is distinct from the Hyde Amendment. The Hyde Amendment bans federal funding from being used for most abortions; it was part of a 1976 appropriations bill for what’s now called the Department of Health and Human Services. Every year, that bill and its corresponding funding gets renewed. In other words, Medicaid won’t pay for abortions unless the woman’s life is in danger or the pregnancy resulted from rape or incest.

The Department of Health and Human Services issued a Final Rule in Feb. 2019 to require “clear financial and physical separation between Title X funded projects and programs or facilities where abortion is a method of family planning.”

“This separation will ensure adherence to statutory restrictions, and provide needed clarity for the public and for Title X clinics about permissible and impermissible activities for Title X projects,” HHS said. HHS also said the rule prohibited “referral for abortion as a method of family planning.”

But the AGs argue that HHS is actually barred from “promulgating any regulation that interferes with provider-patient communications about the full range of treatment options.”

“The Final Rule allows —and in some instances requires—Title X grantees to give pregnant patients directive counseling. And it prevents grantees from providing factual, neutral information to patients about the full range of options, which forces healthcare providers to violate their ethical obligations to their patients,” the brief said.

The second question, in asking whether the Final Rule violates the Affordable Care Act, is particularly interesting considering that it won’t be long until SCOTUS hears the Trump administration’s arguments for eliminating Obamacare in its entirety. The Obamacare case will be heard one week after the election. As of right now, most legal experts predict that the high court will reject lower court determinations that the Affordable Care Act cannot stand without the individual mandate. In other words, it is believed that SCOTUS will rule that the rest of the health care law is severable (or salvageable) without the individual mandate.

New York Attorney General Letitia James, one of the many Democratic AGs involved in the case, said in a statement that the HHS gag rule is consistent with the Trump administration’s approach from “day one”—namely, doing “everything in its power to deny women access to reproductive health coverage.”

“By removing so many of the vital and essential services funded by Title X, President Trump and his administration are essentially holding women’s reproductive freedoms captive,” James said. “These rules are baseless, dangerous, and will prevent millions of women from accessing quality, safe reproductive health care, which is why we are asking the Supreme Court to intervene and protect women’s reproductive rights.”

On Jan. 18, 2013, Barrett presented a lecture at the University of Notre Dame titled, Roe at 40: The Supreme Court, Abortion and the Culture War that Followed. According to the student newspaper account of what was said seven years ago, then-Notre Dame law professor Barrett predicted that it was “very unlikely” that the Supreme Court would “overturn Roe [v. Wade], or Roe as curbed by [Planned Parentood] v. Casey.”

Barrett went on to say the controversy of the day wasn’t whether Roe would be overturned, but whether abortion would be publicly or privately funded.

“The fundamental element, that the woman has a right to choose abortion, will probably stand,” Barrett said. “The controversy right now is about funding. It’s a question of whether abortions will be publicly or privately funded.” Some things have not changed.

Barrett went on to say that “[m]otherhood is a privilege, but it comes at a price.”

“A woman who wants to become pregnant accepts this price, but in an unplanned pregnancy the woman faces the difficulties of pregnancy unwillingly,” she said. “I think supporting poor, single mothers would be the best way to reduce the number of abortions in the U.S..”