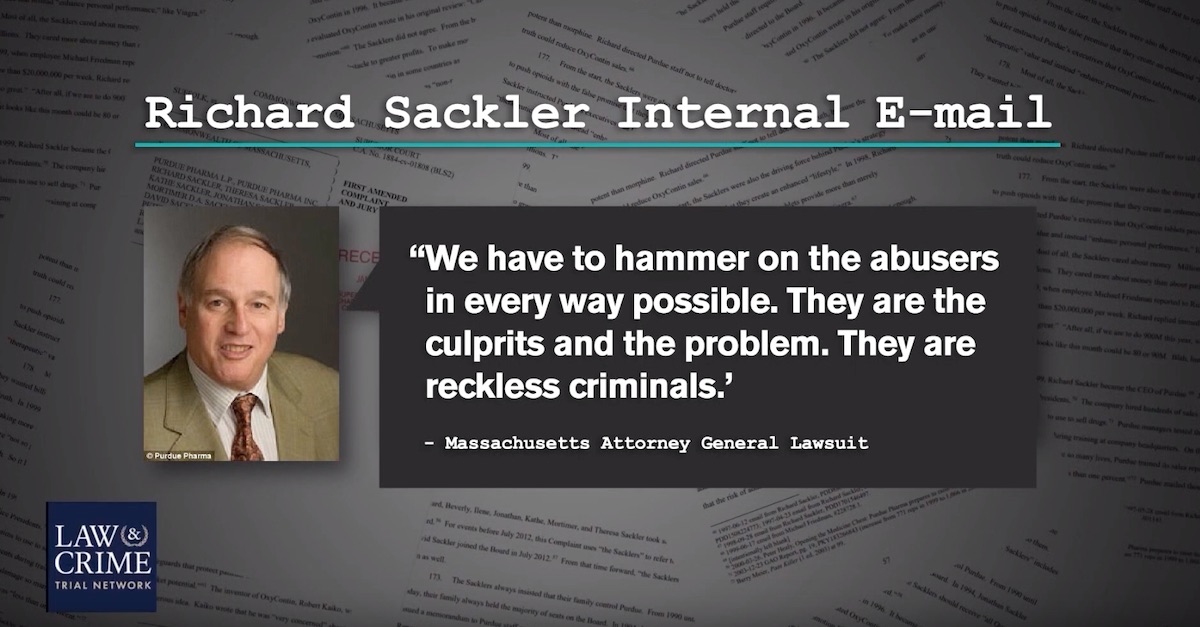 Faced with a torrent of lawsuits and news coverage that paints them as the personification of greed and evil, the Sackler family, whose company has made billions of dollars producing the highly-addictive opioid OxyContin, says they have been misquoted, misunderstood and blamed for an addiction epidemic that is not their fault.

But one of them, Richard Sackler, is now also apologizing for “insensitive” statements that appeared to blame the people who became addicted for the epidemic of abuse.

“They are the culprits and the problem. They are reckless criminals,” Sackler wrote in a 2001 e-mail when he was the president of the company, Purdue Pharma, according to a lawsuit filed by the Massachusetts attorney general against him and other members of the Sackler family.  “We have to hammer on abusers in every way possible.”

Sackler attempted to take back those words in recent testimony this March in a deposition for a lawsuit that consolidates claims brought in some 1,500 cases by local governments and others.

“I was probably quite emotional when I wrote e-mails at that time,” Sackler said in an excerpt of the testimony provided to Law&Crime. “I’ve gotten a lot more information about addiction in general and opioid addiction in particular, and of course, my views have evolved and changed,” he said.

“Dr. Sackler has apologized for using insensitive language that doesn’t reflect what he actually did,” said his lawyer, David Bernick of the firm Paul Weiss.

Sackler also testified his concern was about patients who needed OxyContin for pain treatment. “At that time, I was very concerned that the balance that had been struck by the FDA between the benefits and the risks of strong opioids might be upset, perhaps with terrible consequence for the patients and for doctors who wanted to treat them.”

Sackler’s lawyer says the e-mails were written two decades ago in the wake of news reports about drug store robberies and other criminal activity.  “Dr. Sackler was expressing his worry that this news coverage would stigmatize and essential FDA-approved medication that doctors feel is critical for treating their patients in pain,” said Bernick.  “The same concern from twenty years ago exists today.”

The apology comes as the company faces a trial scheduled to begin this October in Cleveland over the consolidated cases. Lawyers for the Sackler family in the last month have begun to press for a settlement of all pending cases that experts say could involve tens of billions of dollars. According to a Reuters report, an expert plaintiffs’ witness in the consolidated case estimated that “it will cost nearly half a trillion dollars to undo the damage wreaked by the opioids crisis.”

The company and the family agreed to a $270 million settlement last month in a case brought by the state of Oklahoma.  Settlement talks gained momentum after published reports indicated the company might declare bankruptcy.

A key part of the family’s legal and public relations strategy appears to be shifting the blame for the opioid crisis from prescription drugs to the huge increase in illegal heroin from Mexico and Fentanyl from China.

Bernick is part of a high-priced legal team the two wings of the Sackler family have assembled to fight the allegations that they personally were involved in efforts to mislead doctors and the public about the danger of the highly addictive OxyContin.

Also on the case is Mary Jo White of Debevoise & Plimpton.  She is a former United State Attorney in New York and a former chair of the Securities Exchange Commission.

Their primary public efforts to date have been to push back on the allegations the family members were involved in any wrongdoing.

In an interview with Law&Crime, Bernick said the lawsuit brought by the Massachusetts attorney general is full of fabrications, distortions and mischaracterizations.

Massachusetts Attorney General Maura Healey told Law&Crime that, “For years, members of the Sackler family tried to shift the blame and hide their role in creating and profiting off the opioid epidemic.”

“Our lawsuit exposed their illegal deception, and we will aggressively pursue our case against them because Massachusetts families deserve answers and accountability,” Healy said.

The lawsuits have brought unwanted attention and notoriety to a billionaire family that shunned publicity and saw itself as patrons of the arts, with the Sackler family name on museum walls and galleries across the world.

While the company and three top executives pleaded guilty to federal criminal charges in 2007 that Purdue Pharma misrepresented the dangers of OxyContin, Sackler family members are being accused of wrongdoing for the first time.

A series of well-publicized protests at major museums has resulted in many of institutions saying they will no longer accept donations from the Sackler family.

The family’s lawyers say the new lawsuit rely on old e-mails and company actions that have already been dealt with in the federal criminal action.

“Guess what” said Bernick, who represents Richard Sackler, “a lot has happened in the last 20 years and the lawsuits basically completely ignore it.”

The company, he says, has invested more than $1 billion  in initiatives designed to deter abuse.

Editor’s note: this story was updated after publication with comment from the Massachusetts AG.