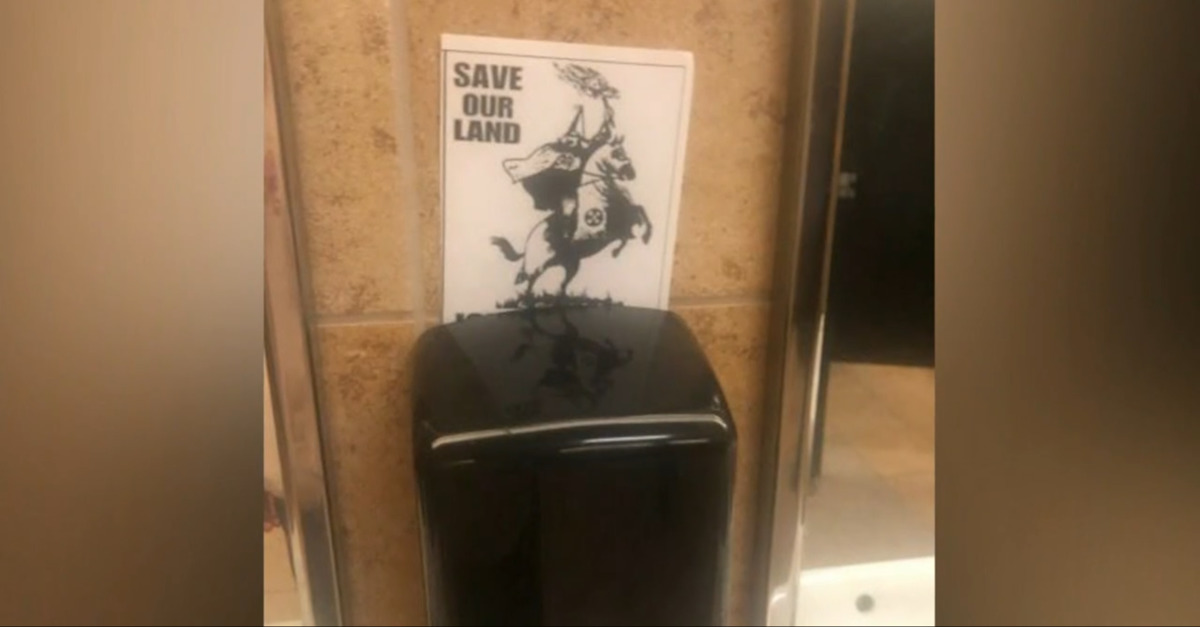 Authorities are investigating a high school in Texas after Ku Klux Klan recruitment flyers were found circulating in a boy’s restroom.

According to CNN, a student at East Central High School discovered a flyer stuck between a soap dispenser and the wall which says, “save our land” in the top left and “join the Klan” across the bottom.

The flyer was reportedly found on Tuesday and depicts a cartoon of a hooded Klansman bearing a torch atop a horse also covered in Klan robes and symbols. The teenager sent the photo to his mother, who then posted about it on social media.

“I was scared, shocked. It was like a threat,” said the student who found the flyer in comments to local CBS affiliate KENS5. “At the end of the day, it’s oppressing me and many others at this school. Others are laughing, I don’t find it funny.”

A second identical flyer was later found by a staff member in a separate boy’s restroom.

I was like, “You got to be kidding me.” Even if it’s a joke, it’s very scary with all that’s going on right now, and I just want to raise awareness that this is not OK. And you don’t want to fear for your child to have to go to school and deal with this.

“A lot of people will downplay it and say ‘What if it’s a couple kids and it’s a prank?’ Well they need to be reprimanded because it’s scary if you know the culture of this,” Jackson told the local news station. “It’s very scary, so it’s not funny.”

Brandon Oliver, the director of marketing and communications for East Central Independent School District, said the school learned about the incident through social media and that an investigation commenced on Wednesday with the help of the East Central Police Department and the Federal Bureau of Investigation.

“This behavior is not tolerated at East Central ISD and not reflective of our core beliefs and inclusive environment,” reads a statement issued by the school district. “The individual will be caught and punished to the fullest extent of the law.”

The FBI told CNN that “so far” no federal crime had been committed–while defending the KKK recruitment flyer on free speech grounds.

“If in the course of the local inquiry, information comes to light of a potential federal violation, the FBI is prepared to investigate,” FBI Special Agent Michelle Lee told the outlet. “However, no matter how offensive a viewpoint may be, expressing certain beliefs in and of themselves is not a crime and the FBI can never open an investigation based solely on constitutionally protected activity.”

Oliver said that no additional flyers had been found and there was no evidence they were being distributed to students directly.

“It has been completely isolated,” the marketing director stressed.

The student who initially discovered the flyer, however, said he had heard about such flyers before but hadn’t seen them–and said he was happy the hate messages were finally being discussed out in the open.

“I’m glad I could be a voice for myself and others who don’t report this type of stuff,” Jackson’s son told KENS5. “I hope this can make people aware.”