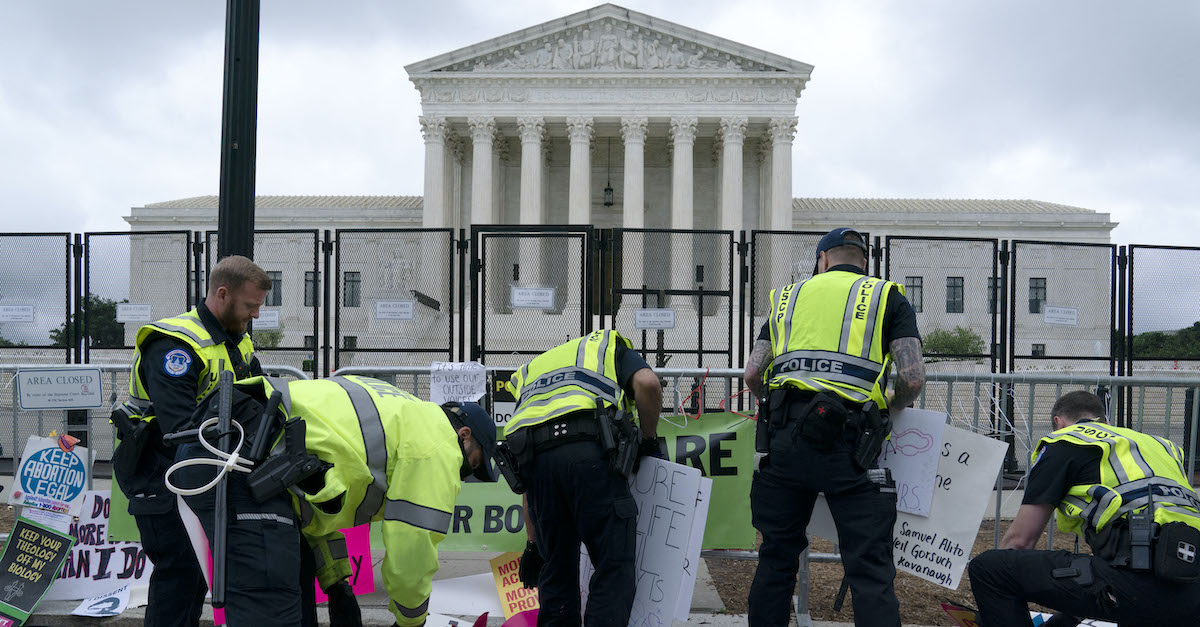 US Capitol police remove banners and signs left at a fence by abortion rights demonstrators outside of the U.S. Supreme Court in Washington, D.C., May 14, 2022.

By the count of some advocacy groups, more than half of U.S. states will likely ban abortion if Roe v. Wade is stricken down, and 12 of those already have such laws on the books—just waiting for a Supreme Court ruling to activate them.

“If in fact we see our highest court in the land wipe away 50 years of settled precedent and deem Roe v. Wade to be ‘egregiously wrong,’ the balance is going to shift to the state courts,” Miriam Krinsky, the executive director of the advocacy group Fair and Just Prosecution, observed on the latest episode of Law&Crime’s podcast “Objections: with Adam Klasfeld.”

A longtime former prosecutor, Krinsky has been gathering dozens of elected district attorneys and attorneys general from coast to coast who have vowed not to enforce any laws criminalizing abortion. That list, by her organization’s count, has grown to nearly 70 elected prosecutors to date.

“I think we’re going to see elected local prosecutors become the last line of defense in many instances, and seeking to use their settled discretion to protect these kinds of decisions—and refuse to bring them into the criminal legal system,” Krinsky said.

Not all of those elected prosecutors hail from deep blue states. Multiple district attorneys on the group’s list represent communities in Texas, Missouri, Mississippi, Alabama and Georgia. At a recent gathering in Washington, D.C., Krinsky said, some 40 elected prosecutors got to together and some told her that they faced blowback for their public stances.

“A number of them reported to me that not everyone in their community is pleased with the position that they’ve taken,” Krinsky said. “Many of them also reflected on the fact that if they’re not willing to make this kind of a decision at this moment in time, then they may as well not hold that job. Because if they can’t make the bold and inspired and courageous decision, when the stakes are this high, then they probably should not have sought the job to begin with, because this is really the kind of moment where the rubber meets the road.”

Krinsky said that the issue goes beyond their political views on abortion.

Even though Roe currently remains the law of the land, civil litigation has cropped into courts seeking to preserve the status quo if the Supreme Court overturns it.

On Tuesday, the Michigan Court of Claims blocked an abortion ban passed in 1931. The statute lay dormant since 1973, the year that Roe rendered it unconstitutional. And though the statute is now blocked, the injunction is preliminary, and the state’s Supreme Court eventually will review a similar case.

“I think we’re all going to need to await with bated breath decisions one at a time to see whether state courts are going to criminalize those kinds of decisions, or whether they’ll find greater protections under state constitutional provisions,” Krinsky said.