‘Lord, Did They Get Out?’: Police Officer Rescues Disabled Woman form Burning Tennessee Home As Explosions Rocked the Neighborhood (VIDEO) 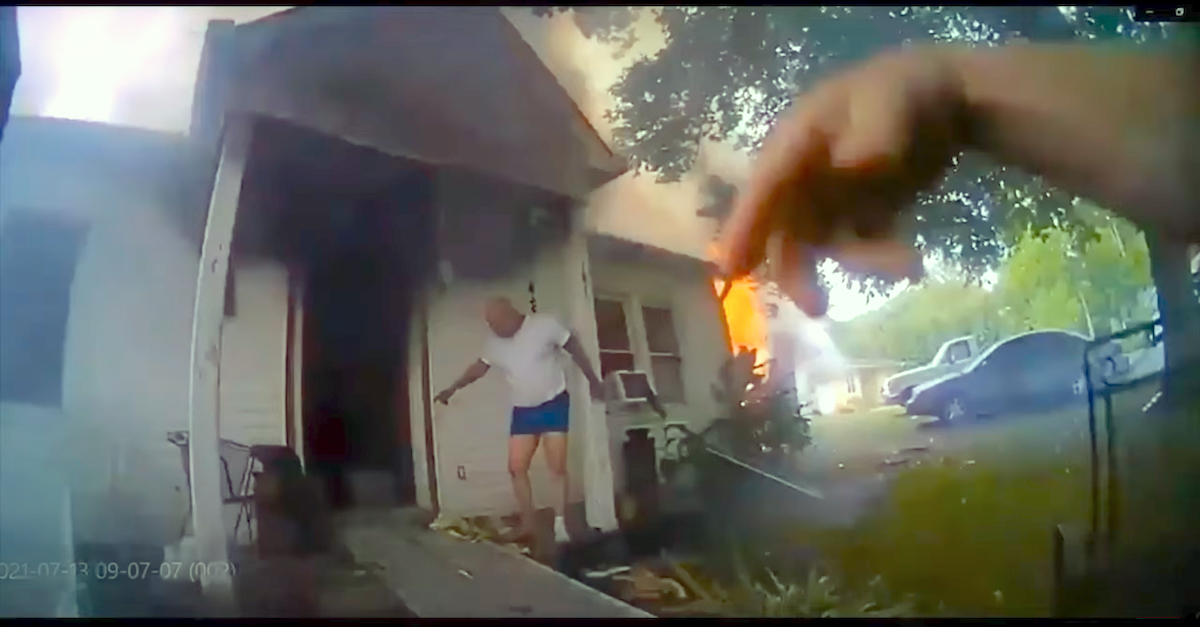 Body camera video captured the moments leading up to the rescue of a disabled Tennessee woman from a burning home that was being rocked by explosions from medical oxygen tanks.

Video released late this week by the Columbia, Tenn. Police Department shows Cpl. Allan Ervin driving to the scene of a house fire at 8:21 a.m. on Friday, July 9.

“Ervin found a disabled woman still inside the home,” the police department said on Facebook. “Crpl. Ervin responded by entering the home, retrieving the individual and carrying her to safety. The cause of the fire is still under investigation.”

The video shows Ervin driving to the scene but stops short of showing him actually entering the building.

“Due to the condition of the rescued woman and its graphic nature,” the department said, “we did stop the video before she could be viewed.”

Ervin was not injured.  The woman he rescued “remains in critical care at Vanderbilt Hospital for burns and smoke inhalation,” the police department said. 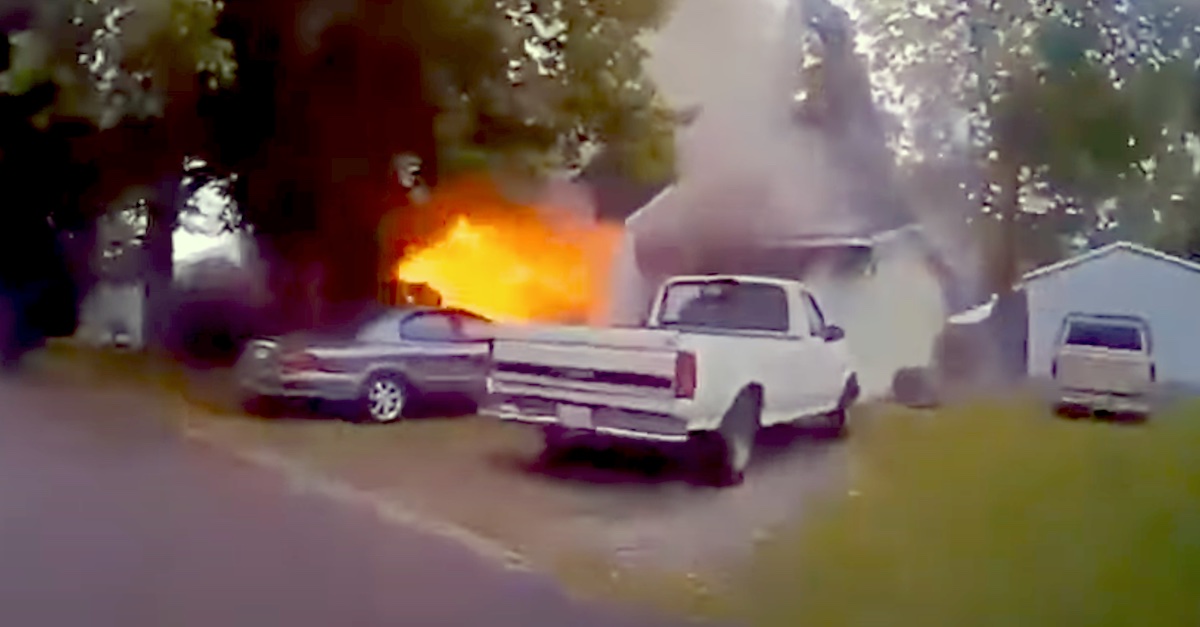 Fire crews told WTVF-TV that oxygen tanks inside the home exploded during the fire and caused the flames to spread rapidly.  One of the explosions appeared to go off almost immediately after Ervin stepped out of his squad car.

“When firefighters arrived on scene, explosions could be heard throughout Riverside from oxygen tanks bursting in the blaze,” Columbia Fire and Rescue said on Facebook. “[Columbia Power & Water Systems] responded quickly to cut off utilities to the home while firefighters battled the blaze.”

Chumley’s parents got out of the house before blasts rocked the structure, the television station said; a neighbor who rushed to the scene said he could see Chumley “lying near the front door.”

The girl’s father tried unsuccessfully to save his daughter, the neighbor told WTVF.

“He finally let go of his walker and crawled to the front door and I saw a blanket with someone’s hands and then I reached for the blanket and boom that’s when the first explosion happened,” the neighbor said, “and the cop finally comes and goes ‘get away from the house.'”

Cpl. Ervin ran into the building seconds after arriving at the scene and pulled Chumley to safety. 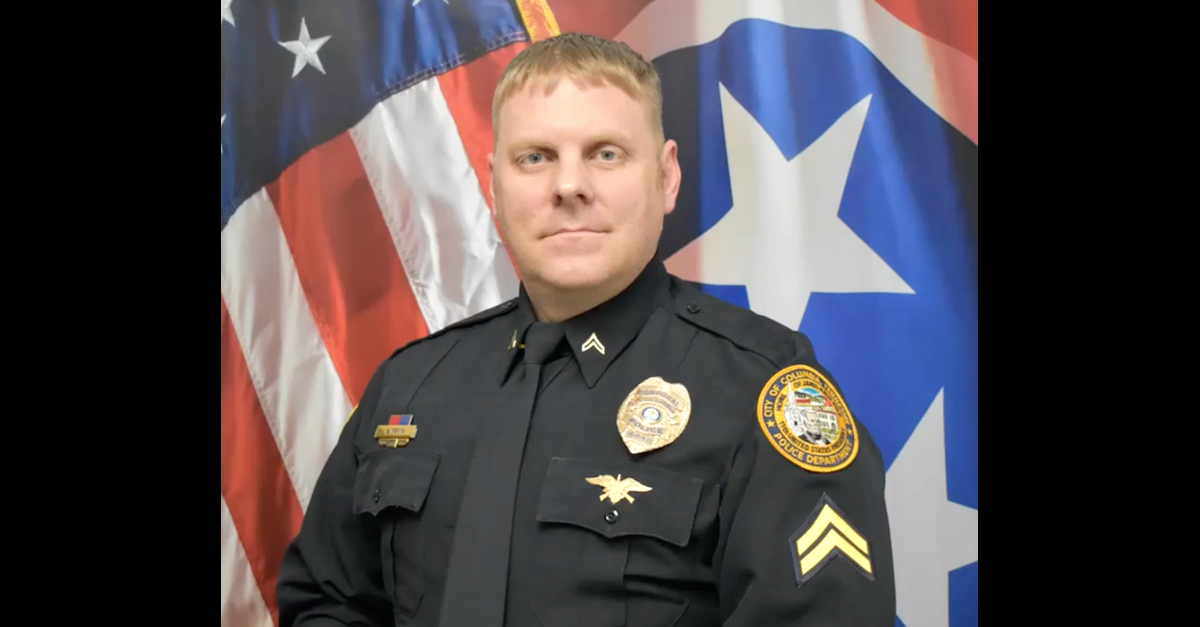 The girl’s parents were taken to the hospital but have since been released, the television station said.

Ervin is a 12-year veteran of the force, WKRN-TV noted. That television station identified Chumley’s parents as Lisa Melheim, 57, and Joe Hartsfield, 54.

Deputy Fire Chief Nick Brown told WKRN that falling debris and the risk of additional oxygen tank explosions were a constant threat both to Cpl. Ervin.

“Fire personnel arrived on scene, and they had several challenges,” Brown said. “The first is a house on fire and oxygen cylinders, with multiple explosions, and then patient care. This shows a great partnership between Columbia Fire and Rescue and Columbia Police, and it is a great example of both departments working together for one common goal, and that goal is life safety.”

Fire officials have reportedly said that the Rinks Circle home is a total loss. According to WTVF, the cause of the fire reportedly remains under investigation, but WKRN said the fire is being ruled accidental — but that the department cannot yet rule out smoking materials found inside the house as a possible factor. The American Red Cross is said to be helping the family with housing.

A neighbor who brings food to the displaced family several times per week told WKRN that she is counting her own blessings — while praying for the family she’s helped for years.

“Every time I look over and think, thank God,” said Callie Braden. “I usually go over there every Tuesday evening or Friday lunchtime to bring them food and I said, ‘Lord, you spared me. You knew what was on the other side of the walls there, and I didn’t.’ I was just praying, ‘Lord, did they get out?’ Because it was so explosive.”