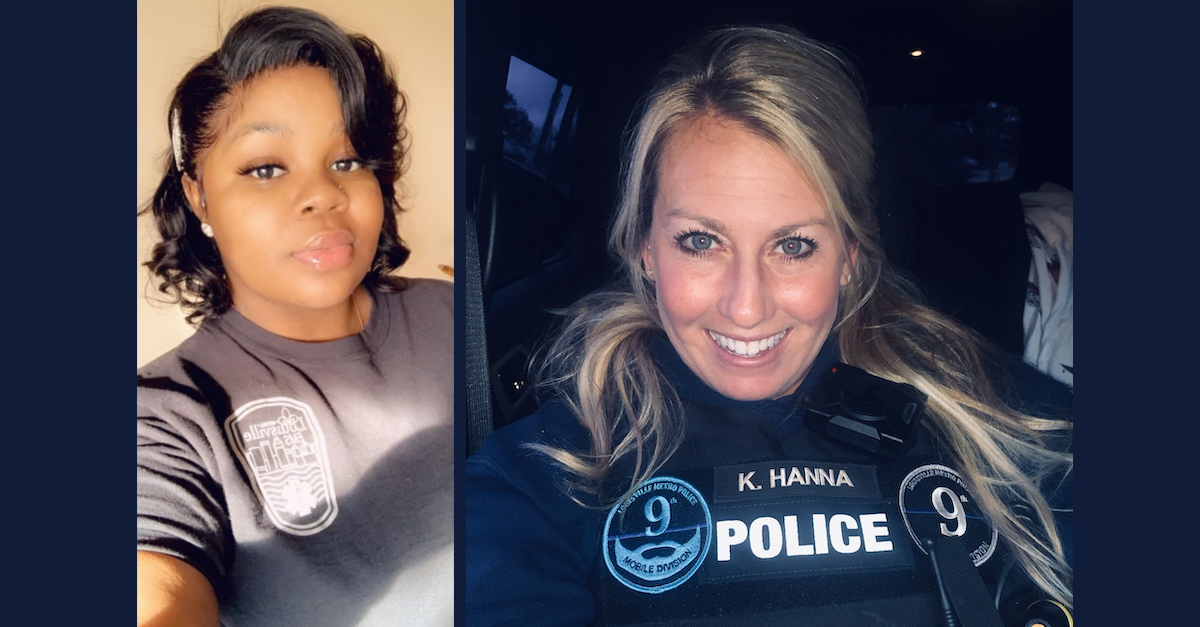 A former Kentucky police officer pleaded guilty in federal court on Tuesday to her role in falsifying the search warrant that authorized the deadly raid that resulted in the police killing of Breonna Taylor.

Onetime Louisville Metropolitan Police Department detective Kelly Hannah Goodlett, 35, was charged with one count of conspiracy earlier this month in a criminal information. At the time, federal grand jurors in the Bluegrass State also indicted three other former and current members of law enforcement over Taylor’s March 2020 slaying, the result of a long-running civil rights probe. Goodlett, as part of her plea deal, will waive and forego the formal indictment process.

In exchange for her guilty plea, federal prosecutors agreed not to file any additional charges related to the underlying incident and argued in a court filing for a two-level sentence reduction provided that Goodlett “clearly demonstrates acceptance of responsibility, to the satisfaction of the government, through her allocution and subsequent conduct prior to the imposition of [her] sentence,” the federal plea agreement obtained by Law&Crime explains.

Additionally, the defendant is subject to a fine of $250,000, court costs, restitution to be determined by the court, and up to three years of supervised following her confinement in federal prison.

An addendum in the plea agreement details how Goodlett did — and how others allegedly — conspired to cook up an affidavit that claimed a drug suspect, identified only by his initials, J.G., was receiving packages at Taylor’s home.

The investigative unit, the LMPD’s Place-Based Investigations unit overseeing the narcotics inquiry, was looking into “whether there was evidence of J.G.’s narcotics trafficking at” five properties in total, including “at Breonna Taylor’s apartment, located at 3003 Springfield Drive,” the addendum to the plea agreement explains.

From that document at length:

Det. [Joshua] Jaynes was the primary drafter of the Springfield Drive warrant affidavit, but Det. Goodlett fact-checked the affidavit and added some information to it. The most important information in the warrant affidavit that linked J.G.’s drug trafficking to 3003 Springfield Drive was the claim that Jaynes had verified from a Postal Inspector that J.G. was receiving packages at that address. As explained below, Det. Goodlett and Det. Jaynes both knew this claim was false.

In fact, Jaynes and Goodlett did ask a postal inspector about the alleged package receipt there. In response to that inquiry, the inspector said “there’s nothing there” or something similar to indicate that J.G. received mail at the residence or that Taylor’s address was otherwise “flagged” for receiving suspicious packages.

The court document is explicit that this type of occurrence never happened again.

Goodlett later saw the draft of the warrant affidavit – complete with the false claim about the packages – and didn’t object, even though she knew the clam about J.G. receiving packages there “was false,” the court documents indicate.

The ex-detective’s complicity, however, didn’t end there. She also authored a paragraph herself in the affidavit that claimed J.G. was listed in databases as having used Taylor’s address.

Again, from the addendum at length:

Notably, Goodlett also did not object to a claim in the affidavit that specifically requested a no-knock warrant. The argument in support of that request more or less identified Taylor’s apartment as being a site of drug trafficking.

Breonna Taylor was killed on March 13, 2020. Her apartment was never searched for drugs.

Taylor’s death would quickly become one of the focal points, and her name one of the rallying cries, for Black Lives Matter demonstrations across the country.

Goodlett is the first person to be convicted in relation to Taylor’s death.

[Image of Taylor via Attorney Ben Crump; image of Goodlett via an LMPD Facebook photo.]