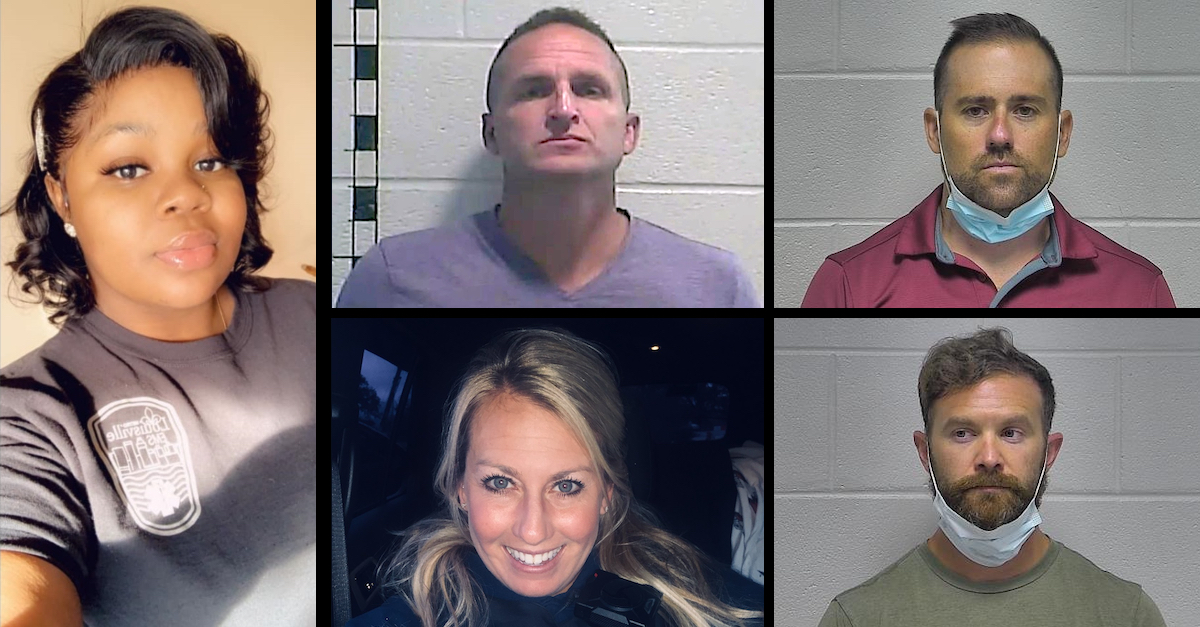 A group of four former and current Louisville, Kentucky police officers connected to the deadly raid that killed Breonna Taylor have been arrested and charged with various federal offenses, the U.S. Department of Justice announced Thursday. Attorney General Merrick Garland generally categorized the alleged offenses as “civil rights offenses, unlawful conspiracies, unconstitutional use of force, and obstruction offenses” that included the “falsification of a search warrant” that “resulted in Ms. Taylor’s death.”

One indictment accuses former officer Brett Hankison, 46, of two counts of deprivation of rights under color of law.

Another information charges sergeant Kyle Meany, 35, and detective Joshua Jaynes, 40, with one count of deprivation of rights under color of law.  The same document, which nominally names both men in the case caption, accuses only Jaynes with two more counts:  conspiracy and falsifying records in a federal investigation.  It also charges only Meany with one count of making a false statement to federal investigators.

WDRB-TV identified Jaynes as a former officer; Meany and Goodlett were identified as current officers.

“The federal charges announced today allege that members of the Place-Based Investigations Unit falsified the affidavit used to obtain the search warrant of Ms. Taylor’s home, that this act violated federal civil rights laws, and that those violations resulted in Ms. Taylor’s death,” Garland said at a press conference Thursday morning. “Specifically, we allege that Ms. Taylor’s Fourth Amendment rights were violated when defendants Joshua Jaynes, Kyle Meany, and Kelly Goodlett sought a warrant to search Ms. Taylor’s home knowing that officers lacked probable cause for the search. We allege that the defendants knew the affidavit in support of that warrant contained false and misleading information and that it omitted material information.”

Garland said the police affidavit that laid the groundwork for the deadly raid “falsely claimed” that officers had verified that the target of a drug trafficking operation had received packages at Taylor’s address.

“In fact, defendants Jaynes and Goodlett knew that was not true,” Garland said.

The attorney general noted that the officers who “carried out the search” were “not involved in the drafting of the warrant and were unaware of the false and misleading statements it contained.”

However, after the raid, Garland said Jaynes and Goodlett “conspired to knowingly falsify an investigative document that was created after Ms. Taylor’s death” and conspired to mislead federal and state authorities about what happened.

Meany is additionally accused of lying to the FBI, Garland said.

Among the accusations contained in the court paperwork are that Goodlett and Jaynes falsely wrote in  an affidavit attached to a search warrant application that a drug suspect listed only by the initials J.G. was receiving packages at Taylor’s home.  Jaynes claimed he “verified” the information from a postal inspector; however, that was not true, the DOJ asserts.  Goodlett, who allegedly knew the information was false, failed to object to it or to change it.  Goodlett also allegedly added a paragraph to the warrant which claimed J.G. was listed in databases as having used Taylor’s address; this information was “misleading,” according to federal prosecutors.

The duo met in Jaynes’ garage to cook up a cover story for themselves, the DOJ alleges, “after media outlets reported” that a postal inspector confirmed J.G. was not receiving mail at Taylor’s address.  Jaynes allegedly told Goodlett “they needed to get on the same page because they could both go down for putting false information in the Springfield Drive warrant affidavit,” according to the information.

The charges against Hankison are separate.  One of the counts against him alleges that he “fired five shots through a bedroom window that was covered with blinds and a blackout curtain” — “the use of a dangerous weapon and an attempt to kill.” 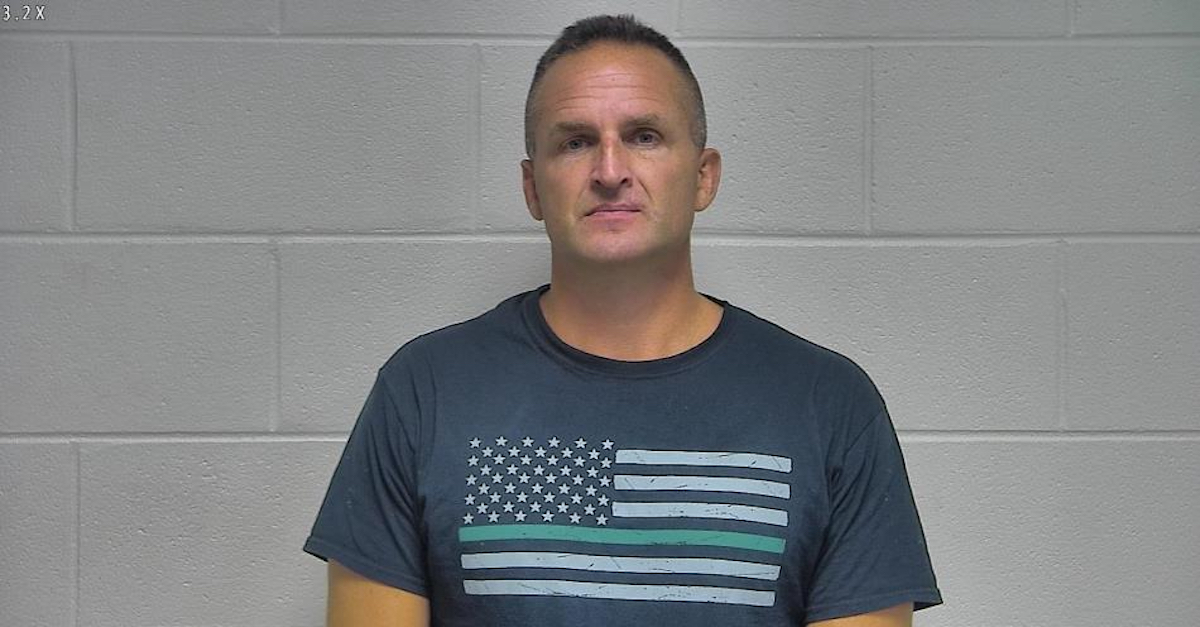 After Taylor was shot, Hankison “moved from the doorway to the side of the apartment and fired ten more shots through a window and a sliding glass door, both of which were covered with blinds and curtains,” the indictment against Hankison asserts.

“[A]fter there was no longer a lawful objective justifying the use of deadly force,” the document continues, “HANKISON fired five bullets into the living from of Apartment 4 through a sliding glass door that was covered with blinds and a curtain.”  Several bullets entered another apartment and endangered three other people, the DOJ alleges.

“On March 13, 2020, Breonna Taylor should have awakened in her home as usual, but tragically she did not,” Clarke said. “Since the founding of our nation, the Bill of Rights to the United States Constitution has guaranteed that all people have a right to be secure in their homes, free from false warrants, unreasonable searches and the use of unjustifiable and excessive force by the police. These indictments reflect the Justice Department’s commitment to preserving the integrity of the criminal justice system and to protecting the constitutional rights of every American.”

Taylor was 26 when she died on March 13, 2020.  Her boyfriend, Kenneth Walker, was described in the Goodlett indictment as “believing that intruders were breaking in” when the police executed the search warrant.  Walker “immediately fired one shot with a handgun that he lawfully possessed, hitting the first officer at the door,” federal prosecutors wrote.

Walker is represented by a smattering of attorneys, including Obama-era Solicitor General Donald B. Verrilli Jr., who collectively applauded the charges.

Steve Romines, one of Walker’s other attorneys, released this statement to Law&Crime:

We have said from the beginning that various LMPD officers repeatedly violated their own policies and Kenny Walker’s constitutional rights in the investigation, raid, and subsequent false arrest of Kenny in an attempt to cover up their own wrongdoings in the killing of Breonna Taylor. It appears a federal grand jury agreed. We will continue to seek justice in the civil courts and call for changes to policies and procedures that protect all our citizens. No other person should ever live through what Mr. Walker has lived through. We call on LMPD to complete an internal review of the injustices to Mr. Walker and publication of changes in the way police officers are trained and supervised.

Read the charging documents against all four defendants below: