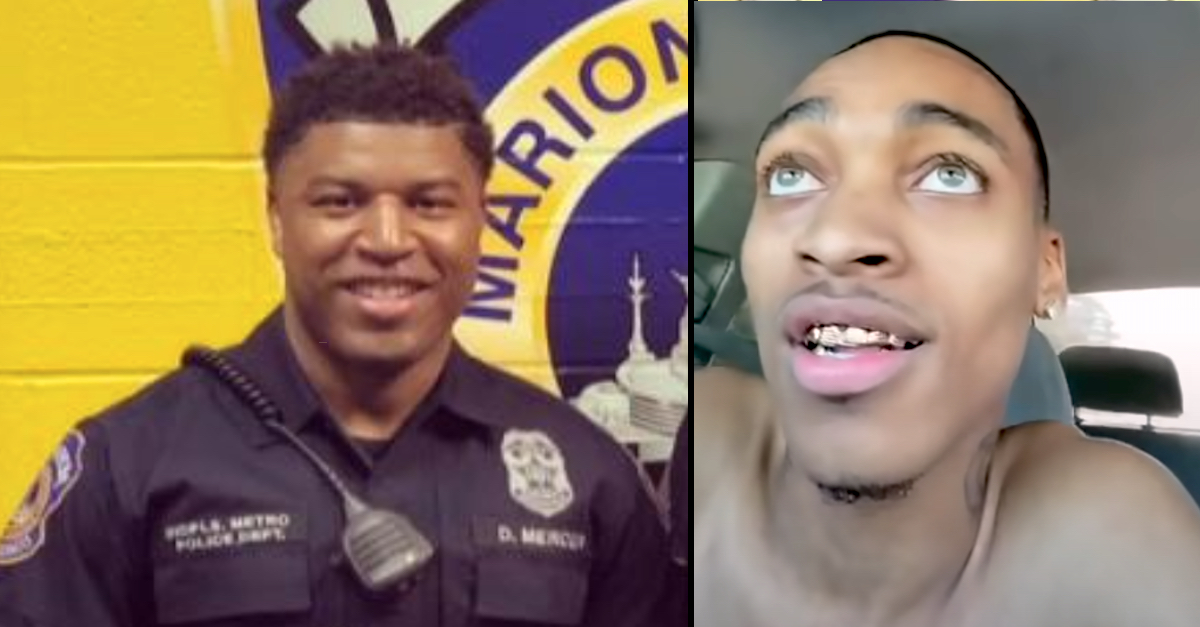 The Indianapolis police officer who shot and killed Dreasjon “Sean” Reed after a high-speed chase has filed a federal lawsuit against the NFL for referring to the killing as a case of “police misconduct,” among other things. The chase is said to have ended with Reed threatening to shoot people, exiting his car at a business, and pulling a gun on the officer who shot and killed Reed in return.

De’Joure Mercer, the officer, says NFL Enterprises, LLC, listed Reed as among a group of “victims of systemic racism, victims of police brutality, and social justice heroes” on its website, on television, and on social media. Other names on the list included Ahmaud Arbery, Atatiana Jefferson, Botham Jean, Breonna Taylor, and George Floyd, Jr.

Say His Name: Dreasjon Reed
Dreasjon is one of the many individuals being honored by players and coaches this season through the NFL’s helmet decal program.#SayTheirStories: https://t.co/vwi75WmNxr pic.twitter.com/wWaasw6LBp

The lawsuit criticizes the NFL for launching a “social responsibility campaign” which sought to boost profits by aligning the league with “certain socio-political agendas and viewpoints” — a move “sparked” by Colin Kaepernick through what the lawsuit calls the “National Anthem Controversy.” That public relationship move, the lawsuit alleges, defamed Officer Mercer.

Reed’s shooting became one of several rallying cries adopted by the NFL, the lawsuit says. The suit alleges that the NFL ignored Reed’s “character for violence” — which the court papers say was “known in the community” — when the NFL selected Reed among a group of others to be remembered through helmet decals and badges.

The lawsuit says Reed was no such hero and that Mercer was justified when he pulled the trigger:

The truth of the matter is that Mercer committed no misconduct during the May 6 Encounter and was publicly cleared of all alleged wrongdoing. Despite a highly-publicized investigation and other information that clearly exculpated Mercer of all wrongdoing, all of which was publicly available and was in fact possessed by and known to one of the National Football League’s teams, the Indianapolis Colts, the NFLE published several online statements accusing Mercer of police misconduct. As detailed below, the NFLE published its false statements of fact negligently and with a reckless disregard of the truth; the NFLE’s statements are defamatory per se and have caused Mercer to suffer severe emotional and reputational injury in his personal and professional capacities.

The lawsuit also attempts to unwind any suggestion by the NFL that Reed’s death is factually comparable to the murder of George Floyd, Jr. in Minneapolis:

The Video gives rise to the inference, implication, and imputation that Mercer committed occupational misconduct and even criminal acts during the May 6 Encounter with Reed, similar to that which were inflicted upon George Floyd. This inference, implication, and imputation is false because Mercer committed no such acts. Similarly, the Video accuses Mercer of committing acts amounting to “social injustice,” which is unequivocally and demonstrably false.

Reed stole a gun, fired it “blindly into buildings,” posted video of his acts online, the lawsuit alleges; he later livestreamed part of his deadly May 6, 2020 encounter with the police. 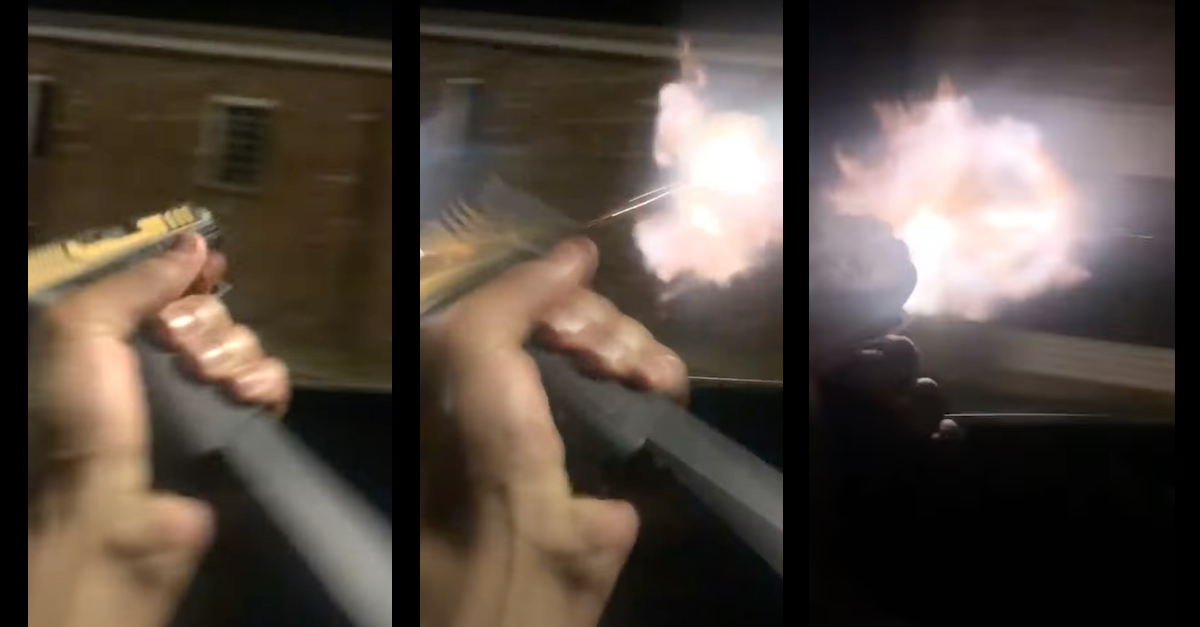 Video referenced in the lawsuit purportedly shows Dreasjon Reed firing a gun out of a moving car into into random structures he passed. (Image via YouTube screengrab.)

“You gotta catch me, baby! I’m not going to jail today!” Reed yelled during the video as the police were chasing him for what the lawsuit calls “driving recklessly at dangerous speeds.”

“I’m gonna start shooting,” he said at one point in the video, according to the lawsuit.

“Fuck you! Ah! Shit!” appear to have been his last words as he ran from his car and gunfire erupted. 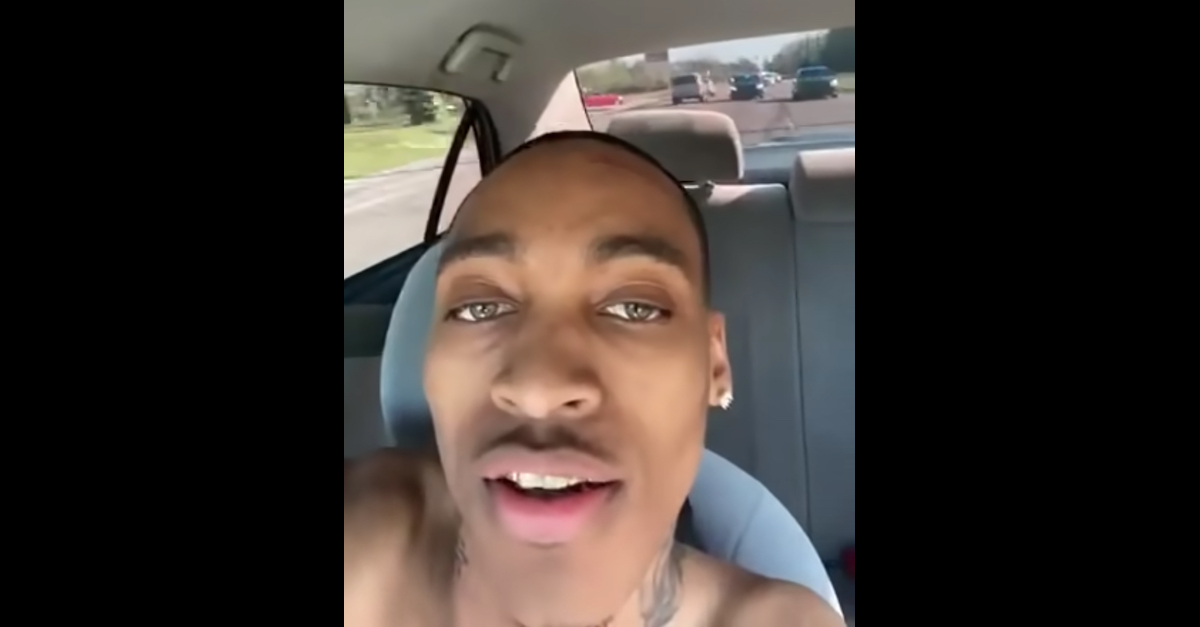 In a video referenced in the lawsuit, Dreasjon Reed is seen running from the police while taunting officers by saying he would not go to jail. Reed livestreamed the encounter and died shortly later. (Image via YouTube screengrab.)

Here’s how the lawsuit describes the shooting, which occurred after police terminated the high-speed chase itself but continued to monitor Reed. Officer Mercer chased Reed on foot after Reed got out of his car at a business while armed:

Mercer caught up to Reed at the intersection of West 62nd Street and Michigan Road. Reed, while running, began sticking his hands in his waistband. After shouting several verbal warnings and demands at Reed, Mercer fired his taser at Reed, and Reed fell to the ground.

As he was falling to the ground, Reed pulled his handgun from his waistband and fired two rounds at Mercer. In self-defense, and in protection of his own life and that of the public, Mercer returned fire. Mercer fired several rounds at Reed, killing him.

Pursuant to Metro Police protocol, Mercer immediately called for paramedics for Reed after Reed was shot.

At no point during the May 6 Encounter did Mercer violate protocol, commit any police misconduct, intentionally murder Reed or commit any other crimes.

“At the time of his death, Reed had three outstanding warrants, including one for felony intimidation and two arising from his theft of the handgun that he used to shoot at Mercer during the May 6 Encounter,” the lawsuit says. “If the NFLE had conducted a simple Google search on Reed, the NFLE would have learned the above information.”

The lawsuit specifically complains of four separate publications by the NFL involving Reed’s death: a September 11, 2020 video; a Sept. 19 website; a Dec. 16 tweet; and a Dec. 16 Facebook post. The lawsuit points out that the December posts incorporated the previous website and were disseminated after the Indiana State Police concluded its investigation clearing Mercer and a grand jury refused to indict the officer.

Legally, Officer Mercer also alleges that the NFL publications were “of and concerning” him personally — even though he is not named.

Mercer must prove as an element of his defamation claim that the NFL’s statements were made “of and concerning” him as a plaintiff in order to prevail.

The complaint document also argues that Mercer is a private figure. Several other courts have concluded that police officers are public figures, since they serve the public and are government employees. The legal question is not unique to this case; it occurs frequently in defamation litigation. The distinction is important, however, because public figures must prove “actual malice” — in other words, that the defendants published content knowing it was factually incorrect or with reckless disregard of whether it was truthful or not. Public figures thus face a higher hurdle than private figures when attempting to obtain money damages through the courts.

Either way, whether he is a public or private figure, Mercer’s lawsuit claims he should win.

Mercer received death threats and was the subject of harassment via telephone, via online media, and out in public after he shot Reed, the documents state.

Mercer says he has “suffered severe emotional distress and personal physical injury” and “will suffer millions of dollars of damages and financial losses throughout the course of his life” as a result of the NFL’s publications. He’s asking for “substantial compensatory damages,” punitive damages, interest, attorneys’ fees and expenses, costs, and other relief.

One of the attorneys representing Mercer released the following statement to Indianapolis FOX affiliate WXIN-TV:

De’Joure Mercer is a hero. He tracked down a very dangerous criminal wanted by the police, who was a threat to the citizens of Indianapolis. He put his life on the line and was nearly killed in that effort. He was completely exonerated after an exhaustive investigation into the death of Mr. Reed. For NFL Enterprises then to suggest he was involved in police or racist misconduct is totally false, defamatory and unacceptable. What happened here has nothing to do with racism.

While we support NFL Enterprises’ efforts to address social justice issues, Officer Mercer is taking a stand for the many, many good cops on duty across America. He is standing up for his friends and colleagues and sending a message that before you accuse a decorated police officer of misconduct in a national campaign, you had better get your facts straight.

[image of De’Joure via the lawsuit; image of Reed via YouTube screengrab]