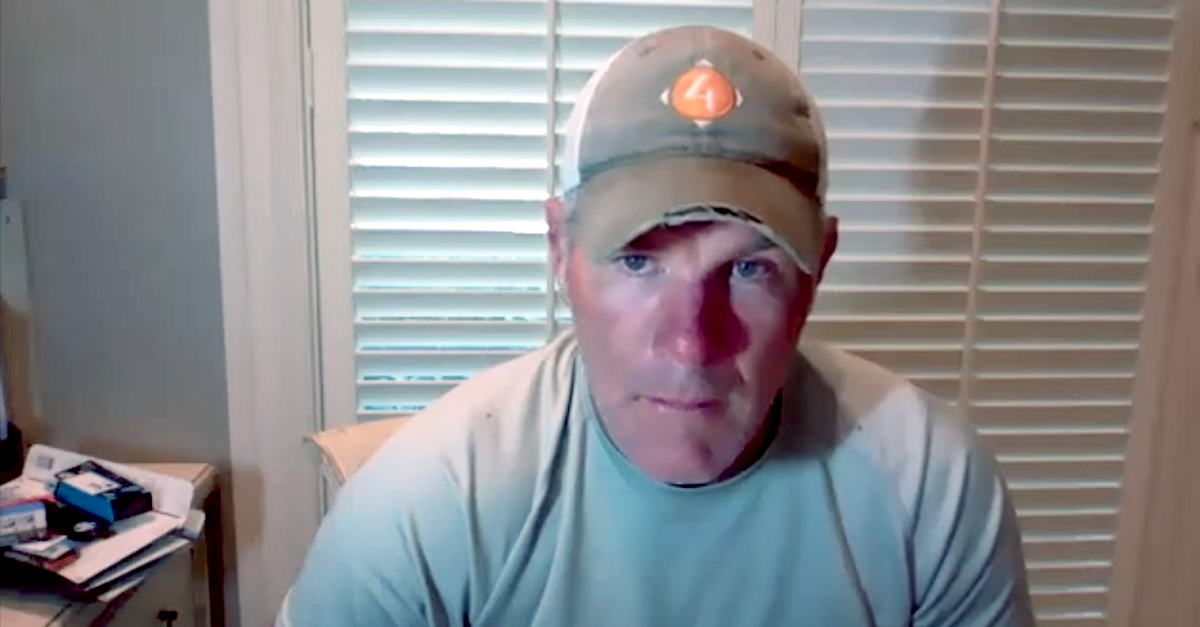 Favre made the comments on his podcast, “Bolling With Favre.” Eric Bolling is Favre’s co-host. Bolling asked for Favre’s reaction of the news.

“You know, I — I find it hard to believe — and I’m not defending Derek Chauvin in any way — um, I find it had to believe, first of all, that he intentionally meant to kill George Floyd,” Favre said in a state of apparent legal confusion over the charges. “That being said, his actions were uncalled for. Uh, I don’t care what color the person is on the street, you do not — I mean — I don’t know what led to that video that we saw where his knee is on his neck.  But the man had thrown in the towel. And — just uncalled for.”

Favre then referenced the police action.

Favre said Chauvin “should have gotten up long before” Floyd’s death.

“I’m really not surprised at the outcome, fair or not,” Favre added. “He deserved something. What, I don’t know, but he was absolutely wrong.”

Bolling said he supported law enforcement but admitted he couldn’t relate to the way Black people are sometimes targeted by some police officers. He then called attention to evidence that one officer asked Chauvin if Floyd should be flipped to his side and that Chauvin declined to do so.

“It’s a shame that George Floyd had to die,” Favre said. He then said police reforms could be “as simple as” forcing officers to stick to protocol, such as placing a tightly restrained suspect into a recovery position. Favre also said he disagreed that the police should be defunded.

Favre himself recently complained that athletes should stick to sports and should not take a knee in social or political protest during professional sporting events.

“I know when I turn on a game, I want to watch a game. I want to watch players play and teams win, lose, come from behind,” Favre said, according to USA Today. “I want to watch all the important parts of the game, not what’s going on outside of the game, and I think the general fan feels the same way . . . I can’t tell you how many people have said to me, ‘I don’t watch anymore; it’s not about the game anymore.’ And I tend to agree.”

He further addressed that criticism in this week’s podcast.

“I’m for unity, and I just feel like there’s a better way to unify our country,” he said. “That being said, there’s a lot of things that need to stop.”

Last year, Favre was more nuanced on the matter.

While critics wondered why Favre decided to wade into legal commentary after suggesting athletes shouldn’t be engaged in social commentary, few challenged the mistaken legal logic of his initial statement. The bottom line is this:  prosecutors never charged Chauvin or his alleged cohorts-in-crime with intentional murder.

Second-degree murder also has many different iterations under Minnesota law. They include the unjustified intentional killing of another person without premeditation and certain kinds of drive-by shootings. They also include unintentional murders. That’s what Chauvin was accused of committing.

Specifically, the top charge of which Chauvin was accused — and convicted — was second-degree murder. Prosecutors alleged — and, according to the jury, proved beyond a reasonable doubt — that Chauvin unintentionally killed Floyd while committing an underlying felony. That underlying felony was third-degree assault.

Third-degree assault is an assault which “inflicts substantial bodily harm.”

“Assault” is either (1) “an act done with intent to cause fear in another of immediate bodily harm or death,” or (2) “the intentional infliction of or attempt to inflict bodily harm upon another.”

In essence, prosecutors convinced a jury that Chauvin accidentally killed Floyd while Chauvin temporarily impaired the function of Floyd’s neck. They never alleged that Chauvin wanted Floyd to die.

Chauvin also faced several lesser counts, none of which alleged intent. One of those lesser charges was third-degree murder.

Third-degree murder in Minnesota involves deaths proximately caused by the illegal use of drugs and other acts “eminently dangerous to others and evincing a depraved mind, without regard for human life.”

Listen to and watch a video version of the podcast below: