Why Is Lauren Gibson Charged with a Hate Crime?
Watch Our Live Network Now

Hate Crime Case Against College Student Who Stomped on ‘Back the Blue’ Sign ‘Makes No Sense,’ ACLU Says 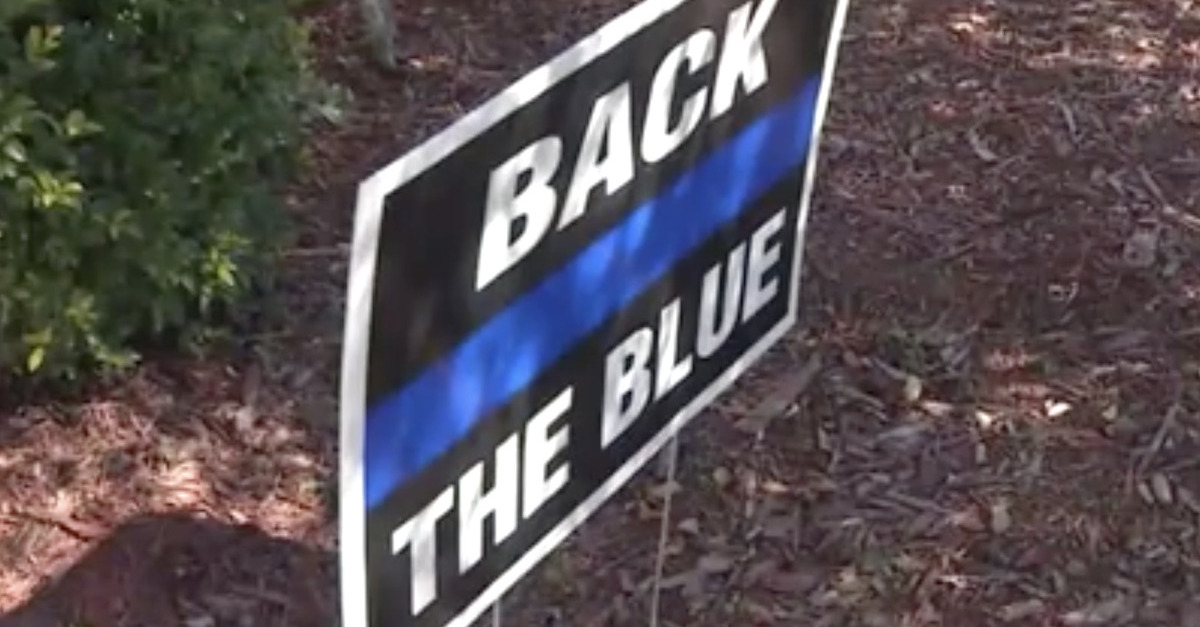 19-year-old Lauren Gibson was charged with a hate crime for stomping on a “Back the Blue” pro-police sign. She now faces a year behind bars or a fine of up to $2,500.

According to reports, Gibson was traveling with friends from a camping spot in Panguitch, Utah, en route to California. One of Gibson’s friends was pulled over by a Garfield County police officer in a traffic stop and given a speeding ticket. According to the Daily Beast‘s interview with Gibson, she observed the officer acting aggressively toward her friend and became upset.

According to reports, the officer certified that he saw Gibson “stomping on a ‘Back the Blue’ sign next to where the traffic stop was conducted, crumble it up in a destructive manner and throw it into a trash can all while smirking in an intimidating manner towards [him].” When Gibson offered “inconsistent stories” as to the sign’s origins, the officer arrested her.

Gibson has now been charged under Utah law with with “criminal mischief” plus a hate crime enhancement. The change means that what would have been a class B misdemeanor (carrying a maximum penalty of 6 months imprisonment or $1,000 fine) becomes a class A misdemeanor with more than double the potential penalty.

Utah’s “enhancement” statute was adopted in 2019; it takes standard crimes and enhances the seriousness of the offenses when certain factors are present. Specifically, when crimes are committed “with the intent to intimidate or terrorize another person or with reason to believe that his action would intimidate or terrorize that person,” the crime carries increased penalties.

“Intimidate or terrorize” means an act which causes the person to fear for his physical safety or damages the property of that person or another. The act must be accompanied with the intent to cause or has the effect of causing a person to reasonably fear to freely exercise or enjoy any right secured by the Constitution or laws of the state or by the Constitution or laws of the United States.

Statutes that increase penalties for “hate crimes” by prioritizing certain victims have been something of a trend in recent years; these laws stretch the traditional concept of a bias-based hate crime to cast a far wider net.

Since the 1980s, the term “hate crime” was used to denote violence motivated by racial, ethnic, and religious bias. The idea was to distinguish run-of-the-mill criminal activity from broad violence aimed at intimidating entire groups of people for who they are.

A hate crime is a traditional offense like murder, arson, or vandalism with an added element of bias. For the purposes of collecting statistics, the FBI has defined a hate crime as a “criminal offense against a person or property motivated in whole or in part by an offender’s bias against a race, religion, disability, sexual orientation, ethnicity, gender, or gender identity.” Hate itself is not a crime—and the FBI is mindful of protecting freedom of speech and other civil liberties.

Legally speaking, there is a clear reason to group race, religion, disability, sexual orientation, ethnicity, gender, and gender identity together: these are the categories that are protected by anti-discrimination laws and Constitutional guarantees. These traits, known as “immutable characteristics,” are given heightened legal protection. The rationale behind that protection is based on the unchanging nature of those inherent traits, the groups’ history of suffering discrimination, and the potentially intimidating effect of bias crimes on the group as a whole.

By contrast, basing enhanced penalties on a victim’s activity or profession is a different concept entirely. Conduct — even highly-valued conduct such as working as a police officer — is not an immutable characteristic. Furthermore, most states and the federal government already have separate statutes on the books to criminalize violence against law enforcement officers.

Utah has opted to enhance all crimes of intimidation, even when the basis for intimidation is not based on any particular characteristic of the victim; this exceedingly broad standard flips the concept of a targeted hate crime on its head. Essentially, Utah’s statute ensures that any victim who is afraid could trigger enhanced penalties.

The ACLU of Utah issued a statement on Gibson’s charges, arguing that use of Utah’s enhancement statute carries the significant risks:

This kind of charging decision sends an extremely chilling message to the community that the government will seek harsher punishment for people charged with crimes who disagree with police actions. This concern is even greater because we do not view the enhancement as supportable under the language of the statute. We consistently warn that enhancements are oftentimes used to single out unpopular groups or messages rather than provide protections for marginalized communities. This case has confirmed those warnings.

The ACLU said Gibson’s is the kind of case that calls for prosecutorial discretion, particularly because a prosecution that could result in a year of imprisonment “makes no sense both in terms of simple fairness and expending the county’s time and money.”

The Garfield County attorney’s office did not respond to a request for comment.