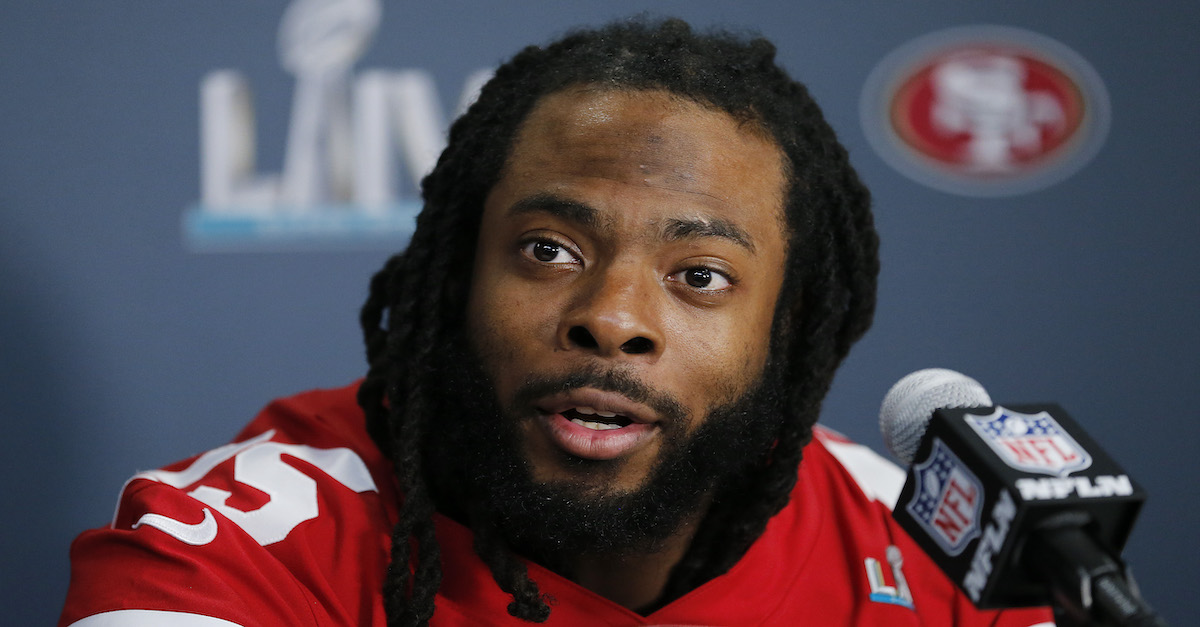 Richard Sherman, the free-agent cornerback who had recently indicated he would welcome a return to Seattle, has been arrested for burglary domestic violence, and is under investigation for possible DUI, according to law enforcement and King County court documents.

“At 11:26 p.m. on Tuesday, July 13, Redmond Police were notified by the King County Sheriff’s Office that Sherman was possibly traveling to Redmond,” a press release from Redmond police said Wednesday. “At approximately 1:49 a.m. on Wednesday, July 14, Redmond police officers were called to a residence for a reported in-progress burglary. Sherman was attempting to force entry into a family member’s home.”

“Officers arrived and located Sherman outside the home,” the press release also said. “The suspect fought with officers while being taken into custody, resulting in a Redmond K9 team being deployed to assist in gaining control.”

At a press conference Wednesday, Redmond Police Chief Darrell Lowe said the domestic violence component of Sherman’s arrest arose solely from his familial relationship to the people in the house he was trying to enter, which Lowe said belonged to Sherman’s in-laws. Lowe said that Sherman did not physically assault any family member or significant other.

Lowe also said that officers on the scene were able to engage Sherman amicably for about 10 minutes, as they tried to de-escalate the situation. One of the officers shared a story with Sherman about how the two had previously met briefly, when the officer was a valet as a teenager, which Lowe said seemed to calm Sherman down.

However, when police told Sherman that they were going to arrest him, things escalated again. Sherman started to walk quickly away from the police, and there was an altercation between Sherman and two officers. That’s when the K-9 was deployed.

Sherman suffered lacerations to the lower leg as a result of the K-9 involvement, and was treated at a local hospital, Lowe said. Washington State Police captain Ron Meade said that one trooper and one police officer sustained minor injuries in the altercation, but medical treatment was not required.

Meade also said that Sherman is suspected of having driven into a closed construction zone while impaired. No one was injured, but the SUV believed to belong to Sherman sustained significant driver-side damage.

“Troopers with the Washington State Patrol were also on-scene investigating a hit and run incident,” the press release said. “The individual is suspected of leaving his severely damaged vehicle and fleeing on foot after striking a cement barrier to an SR 520 off-ramp prior to him arriving at the residence.”

Sergeant Darren Wright confirmed to Law&Crime that state troopers are investigating Sherman for DUI and hit and run. Wright said that the state patrol’s investigation into revealed that an abandoned car was registered to Sherman.

“As per usual, we notified the local police department, which in the case was Redmond,” Wright said. “They said they were also looking for Sherman, so we went to the [residential] location to continue our investigation, and ended up assisting the Redmond Police Department.”

King County records showed that Sherman was booked into the Seattle Correctional Facility just after 6 a.m. on Wednesday. A spokesperson for the King County prosecutor said that people who are booked into jail after midnight normally appear in court the following day, meaning that Sherman’s first appearance will likely be Thursday afternoon.

Although records indicated that Sherman’s bail was denied, the King County prosecutor’s office clarified that that bail amounts are normally set at a first appearance hearing, which hasn’t happened yet. The prosecutor’s office also noted that although the King’s County website said Sherman was charged with burglary domestic violence, that’s not technically correct; instead, that was the given reason for booking Sherman into jail, but charges have not yet officially been filed.

Notably, by Wednesday afternoon, Sherman’s case had been sealed, and an “extreme risk protection order” had been issued.

Sherman, 33, most recently played with the San Francisco 49ers, and became a free agent in 2021. Before that, he was with the Seattle Seahawks from 2011-2017. A five-time Pro Bowl selection during his time in Seattle, Sherman filled an essential role as a team leader, face of the franchise, and top cornerback on a defense that became known as the “Legion of Boom.” Their dominance peaked with a 43-8 victory over the Denver Broncos in 2014 at Super Bowl XLVIII.

As recently as May, Sherman had expressed interest in returning to Seattle.

“It’s always in the cards,” Sherman said, according to an NFL.com report. “I spend my entire offseason in Seattle, that’s where I live, that’s where my family is. So, it’s never out of the cards. Obviously, Pete (Carroll) and I have had conversations throughout the offseason, and everything just needs to shake out right. They’re still figuring things out, I’m still figuring things out.”

Sherman has been married to longtime girlfriend Ashley Moss since 2018. They have two children together, according to a 2018 USA Today report of the couple’s wedding in the Dominican Republic.

“At this time we’re going to make no statements, except he didn’t harm anybody,” Moss told the Seattle Times on Wednesday. “My kids were not harmed in the incident. He’s a good person and this is not his character. We’re doing all right, just trying to get him out. I want people to know no one was injured.”

Moss is reportedly the executive director of Blanket Coverage, an organization that provides students in low income communities with school supplies and clothing. Blanket Coverage is part of the Richard Sherman Family Foundation.

In Washington, burglary domestic violence can occur in two ways.

First degree burglary occurs when someone unlawfully enters a building with intent to commit a crime, and while doing so, either is armed with a deadly weapon or assaults someone. In Washington, this is a Class A felony punishable by up to life in prison and/or a fine up to $50,000.

Second degree burglary involves unlawful entry in a building other than a vehicle or dwelling, with intent to commit a crime “against a person or property therein.” This is a Class B felony punishable by up to 10 years in prison, and/or a fine up to $20,000.

The NFL Players Association released a statement saying it is monitoring the situation closely.

Sherman is a vice president on the NFLPA’s executive committee.