How Quickly Can Trump Be Impeached? | Law&Crime
Opinion

The House Is Moving Quickly Towards a Second Trump Impeachment. This Is the Evidence It Must Focus On.

It looks like President Donald Trump is on track to make history as the only American president to be impeached twice. Unlike the perfect-phone-call impeachment, this would-be sequel has a much straighter shot to conviction.

Trump’s refusal to concede the election and his many public statements encouraging supporters to take to the streets have been widely slammed as incitements to riot. Certainly, on its own, such behavior could form the basis of impeachment charges. But it’s what Trump did after the riots that has potential to be much more damning.

As Tulane Law professor and impeachment expert Ross Garber pointed out, proving that the president intended to incite a riot could be difficult. If Trump refused to call in the National Guard while the riots were threatening Congress, though, that’s more obvious malfeasance.

This is why I’ve been focusing on what Trump did after the Capitol was taken. Many will say Trump didn’t intend the violent occupation. But did he, as reported, refuse calls to retake the Capitol and rescue the VP and members of Congress? https://t.co/KMgwdVEHxZ

Notably, there is some serious discrepancy between what President Trump said he did, and what it appears he actually did.

In Trump’s non-apology and almost-concession video released Thursday, the president claimed right out of the gate that he “immediately deployed the National Guard” once the insurrection broke out at the Capitol.

That doesn’t square with the account given by Acting Defense Secretary Christopher Miller:

A January 6 press release by Chief Pentagon Spokesman Jonathan Hoffman also did not mention the president:

“Earlier this week, Mayor Bowser requested approximately 340 D.C. National Guardsmen to assist D.C. police in preparation for possible protests today. That request was approved. Today, the mayor requested the full activation of the D.C. Guard to support local and federal law enforcement as they respond to the situation at the Capitol. That request was approved. There have been no other requests from the D.C. government.”

Nor did a tweet from Hoffman on that day in infamy mention Trump. That tweet came hours after the violence started.

The DC Guard has been mobilized to provide support to federal law enforcement in the District. Acting Secretary Miller has been in contact w Congressional leadership and Secretary McCarthy has been working w DC government. The law enforcement response will be lead by DOJ.

While the president’s supporters were derailing the joint session of Congress—forcing Vice President Mike Pence and lawmakers to evacuate—Trump attacked VP Pence on Twitter. Follow-up tweets did not use the words “go home.” 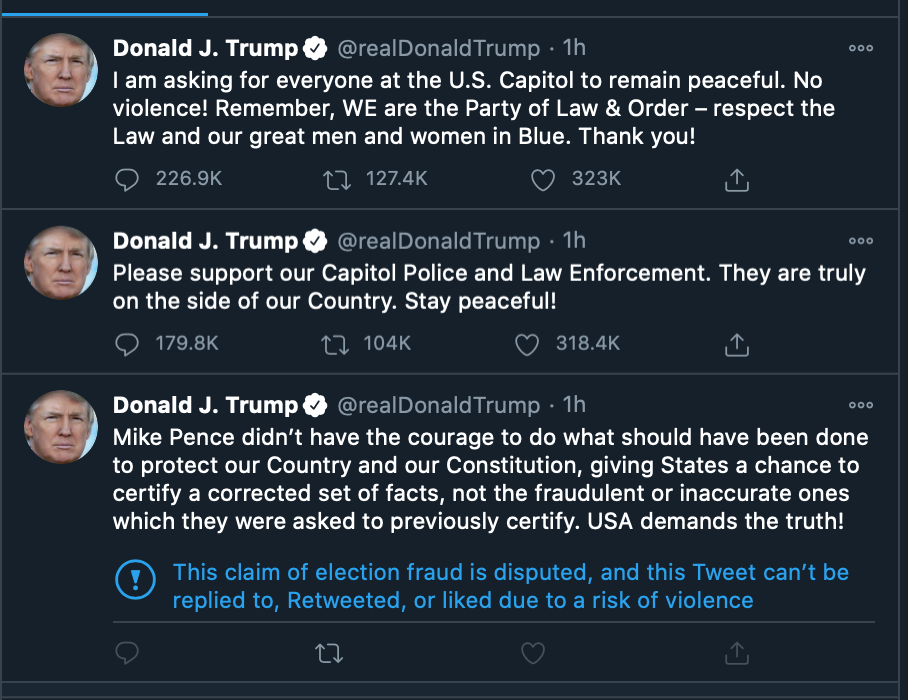 Later, Trump said this is what happens when a “sacred landslide” is stolen, explaining away the conduct of his supporters by doubling down on the lies that spurred on the riots. 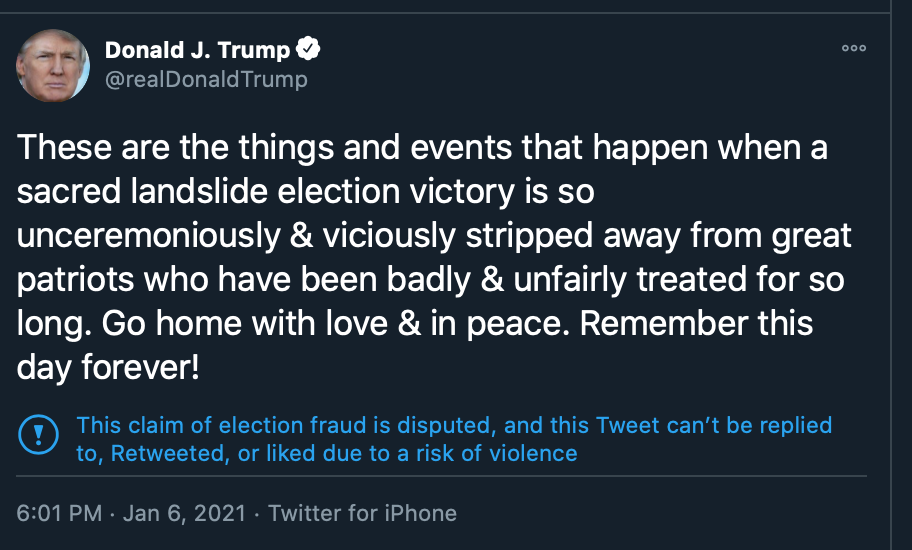 The president finally released a video in which he did tell his supporters to “it’s time to go home,” but he said that only after saying he felt their pain and only after repeating the “stolen” and “fraudulent election” lies that incited the insurrection that day.

After impeachment talk began and appeared to be getting even more serious, President Trump released a scripted video on Thursday that began with the claim he “immediately delayed the National Guard.”

If Trump truly refused to deploy the National Guard to protect the Capitol, and then lied about that refusal to the American people, those actions clearly support immediate impeachment. Furthermore, that impeachment need not require protracted investigation or litigation. Rather, as Garber pointed out, an expedited process could be undertaken that would serve the dual purpose of informing and protecting the American people.

2/
– There should be some abbreviated method of assembling information and agreeing on charges, say a Select Committee. Again, need not be lengthy.
– But public (esp. Trump voters) need facts and explanation of charges. ie. Did Trump refuse to allow Nat Guard to retake Capitol?

Furthermore, Trump’s refusal to deploy the National Guard has secondary legal significance; in addition to being problematic on its own, it could serve as context for Trump’s intent prior to the riots. If Trump refused to provide protection to members of Congress and others at the Capitol during a riot, it further supports an inference that he intended to incite a riot with his earlier statements for the purpose of intimidating Congress and VP Pence and stopping them from certifying Joe Biden’s win. While either portion of this one-two punch of action-inaction could be an independent basis for impeachment, the combo certainly demands it.

Law&Crime spoke with Garber Friday, who said, “impeachment is intended as a prophylactic – to prevent damage from a dangerous official’s continued service.” While that process is often lengthy, there’s no requirement that it be so.

Garber continued to explain that Congress’s power of impeachment “should not be deployed as a means of moral condemnation,” but rather as a simple means of ousting an official who poses a danger to the public. Accordingly, Garber said, “the questions now facing the House Democrats should be whether Trump’s early removal is necessary and if it is potentially feasible.”

As I have discussed before at length, impeachment is not a criminal trial; it is simply a means to remove a public official from their office when necessary. Although Trump has only 12 more days in his term, his conduct in recent days still warrants serious consideration of immediate removal. As we’ve seen, even one more day with Trump at the helm could result in serious consequences.