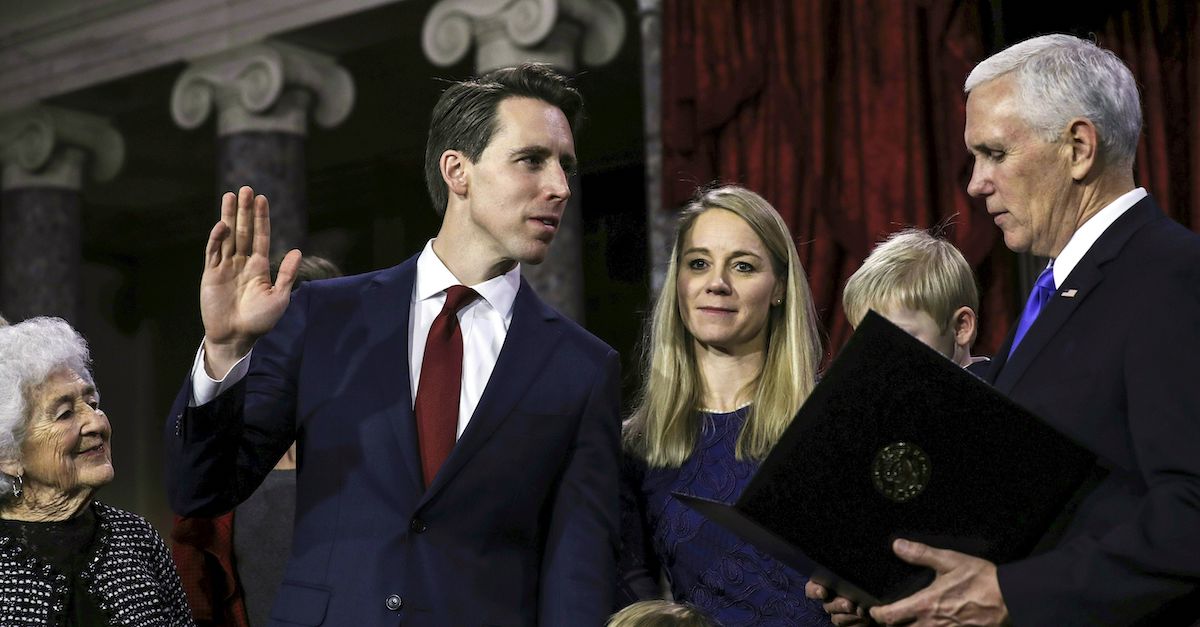 Erin Hawley, the wife of Sen. Josh Hawley (R-Mo.), was listed as of counsel to the appellate practice of Kirkland & Ellis LLP as recently as January 6, 2021, the day the Capitol coup took place. Hawley’s bio associating her with the firm has since been scrubbed from the internet.

Hat tip to Andrew Perez of The Daily Poster for noticing that Erin Hawley’s bio had been taken down from the Kirkland & Ellis website. The bio for the former clerk of Chief Justice John Roberts had been active on Jan. 6, a Google cache shows.

Here’s what now appears at that URL:

The publisher said that, actually, Sen. Hawley—by objecting to the election results, thereby catering to the outright falsehood that the 2020 election was stolen from Donald Trump—played a prominent role in stoking the outrage that led to deaths on Jan. 6.

Hawley and Sen. Ted Cruz (R-Texas) led the charge in the Senate to object to electoral votes in swing states that President Trump lost to Joe Biden. In doing so, they transformed a ministerial task into an event that many of the president’s supporters believed had the potential to reverse the election outcome or, in their words, to “stop the steal.”

“After witnessing the disturbing, deadly insurrection that took place on Wednesday in Washington, D.C., Simon & Schuster has decided to cancel publication of Hawley’s forthcoming book, The Tyranny of Big Tech,” Simon & Schuster said. “We did not come to this decision lightly. As a publisher it will always be our mission to amplify a variety of voices and viewpoints: at the same time we take seriously our larger public responsibility as citizens, and cannot support Hawley after his role in what became a dangerous threat to our democracy and freedom.”

Sen. Hawley has also been scolded by his donors, mentors and his hometown newspaper.

Former Sen. Jack Danforth, Hawley’s mentor, called his support of Hawley “the worst mistake I ever made in my life.”

It seems Sen. Hawley’s actions may have even cost his wife a place in legal elite circles. Law&Crime reached out to Kirkland & Ellis by phone and email to ask why Erin Hawley’s bio had been scrubbed, but we have neither received a call back nor a response to the email inquiry.