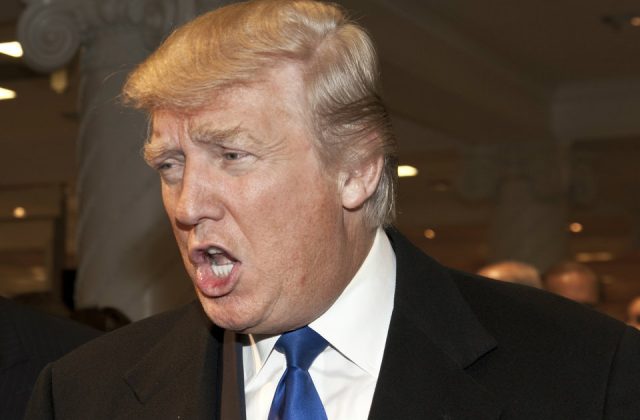 Since last November, I’ve been the recipient of yuge amounts of criticism any time I’ve asked whether it’s time to begin those impeachment proceedings we all expect are imminent. Hoping for impeachment, the critics have said, is hoping that our president fails. But guys, we’re really, really far beyond that point now. If considering impeachment is like rooting for your airline pilot to fail, then listening without action to Trump’s self-important tantrums today is like watching your pilot pass out, and ringing for the flight attendant to bring you headphones as the plane careens toward land.

Putting aside that our gilded lunatic of president may be better served by inpatient therapy than by anything Congress could deliver, let’s just recap how impeachment should go down. Under Article II, Section 4 of the U.S. Constitution, a President can be impeached upon the “Conviction of, Treason, Bribery, or other High Crimes and Misdemeanors.” The House brings those formal charges against the president, and then the whole circus moves over to the Senate, which acts as the trier of fact. The Senate then hears evidence and makes the decision whether to convict and remove from office (by a two-thirds majority).

Considerable disagreement surrounds the meaning of “High Crimes and Misdemeanors.” There are those who believe that the language means that the president must have committed a pretty serious crime – -a view which the historical record certainly supports. President Bill Clinton was impeached for lying under oath, and Andrew Johnson was impeached for violating a federal statute. Trump’s monumental mishandling of the tragedy in Charlottesville this week is bad on many, many levels – but it’s [unfortunately] probably not a criminal offense. However, this is where we might want to turn to what some legal experts say is the real meaning of “high crimes and misdemeanors.”

Harvard Law Professor Noah Feldman, for example, has offered a take on impeachment that fits our current situation perfectly. According to Professor Feldman, “high” is meant to modify both the word “crimes” and the word “misdemeanors,” and does not, as is often assumed, relate to the seriousness of an offense – but rather to the nature of the offense. “High,” back in the time of the Constitution’s drafting, meant “governmental” or “official,” as opposed to “personal” or ‘private.” Furthermore, “Crimes and misdemeanors” does not mean violation of actual criminal statutes. Instead, this was an artful phrase meaning any action “performed in an official capacity by a government official that violates the basic principles of government.”  Trump’s official statements today, which appeared to backtrack from any criticism of white supremacy, certainly counts under those standards.

Professor Feldman, by the way, did not pull his thesis from thin air. He extensively researched James Madison’s involvement with what had been a controversial drafting of the impeachment language. Apparently, the convention first used the word “maladministration” (18th century for “just doing a general crappy job”) to describe the grounds for impeachment. Madison called that out for being too vague and setting every president up for impeachment. So the group agreed on “high crimes and misdemeanors.” Broad enough to mean something, but specific enough not to mean everything.

Essentially, that means that impeachment is appropriate whenever our current government says it’s appropriate. And if the House wants to use Trump’s soft treatment of neo-Nazis, or his utter lack of self-control when addressing the press, or his generally disastrous egotism to serve as the basis for commencing the impeachment process, it can just go ahead and do so.  It just has to have the guts to do so.

There is genuine legal basis for the use of the impeachment process to do what no other process is fit to do: get rid of a president who is simply doing a lousy job leading our country. Elections are not –and were never meant to be – sentences. We as a democracy should not be forced to endure a presidency that is proving to be malignant. At this point, the 45th president of the United States has acted in a manner that would materially disqualify him from every job imaginable, from hot dog vendor to CEO. Using impeachment as a sort of Congressional performance review is, admittedly a relatively new take on things, but it is one that is neither radical nor baseless. That a president should be directly accountable for how he governs is a given. For the record, this is not the kind of accountability I mean.

Thank you President Trump for your honesty & courage to tell the truth about #Charlottesville & condemn the leftist terrorists in BLM/Antifa https://t.co/tTESdV4LP0