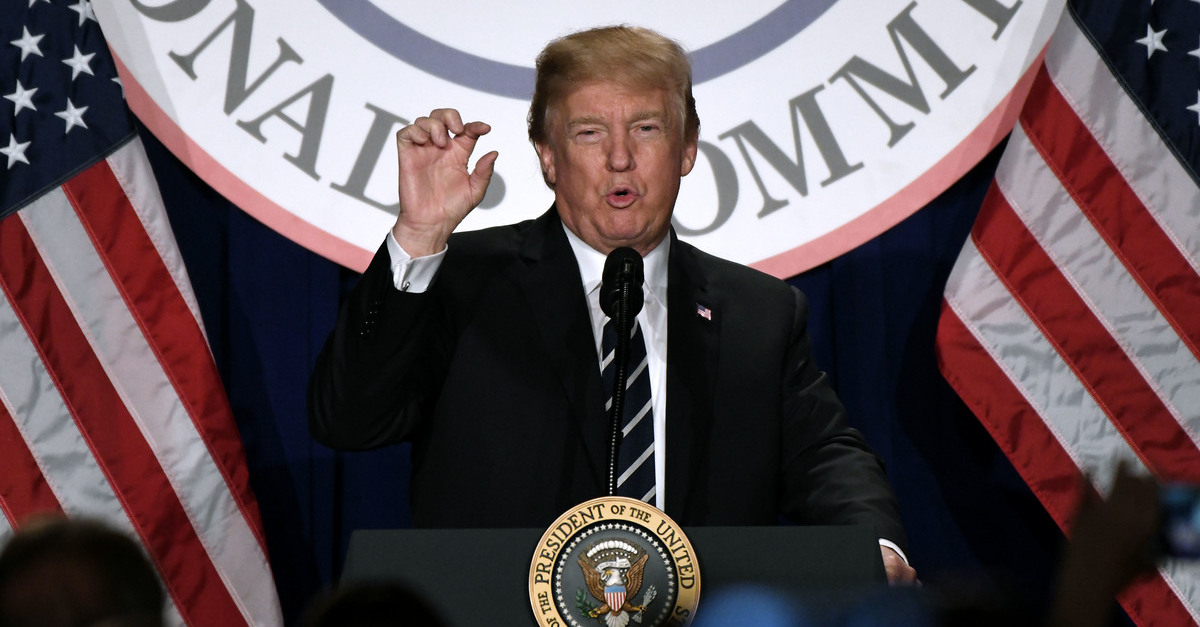 Since President Donald Trump took office, his presidency has marched to the steady drumbeat of recurring Emoluments Clause violation accusations. Although both the president’s business entanglement and opacity is unprecedented, litigation seeking to call him to task hasn’t been packed with easy wins. That may continue to be the case.

On Monday, a three-judge panel of the D.C. Circuit heard the Trump administration’s appeal of a lower court’s decision to allow an emoluments case filed by members of Congress to move forward. The case, filed in September 2018, was initiated by 200 congressional Democrats led by Sen. Richard Blumenthal (D-Conn). U.S. District Judge Emmet Sullivan found the lawmakers had proper standing to sue the president for violating the Foreign Emoluments Clause by profiting from world leaders patronizing his businesses.

Standing is a preliminary requirement in all lawsuits, whether the compensation sought amounts to pennies or millions. Standing is the sometimes amorphous requirement that in order seek legal redress for a person’s wrongdoing, a litigant must have been actually harmed by that particular wrongdoing. The requirement for standing is what stops individuals from suing when they simply don’t like laws, policies, businesses, or people.

Then came Judge David Tatel, who appeared to agree, saying that recent Supreme Court precedent indicates that individual members of Congress may not have the necessary standing to move forward with the case. Tatel said:

What [Virginia House of Delegates v. Bethune-Hill,] says to me is that individual members of a legislature cannot sue to represent the interests of the legislature as a whole. You’re not here representing Congress, so you can’t protect the institutional interests of Congress.

Justice Department attorney Hashim Mooppan called Democrats’ arguments on standing “misguided,” arguing that they couldn’t be bringing suit on behalf of a united Congress. Mooppan maintained, “If Congress as a whole actually agreed with [the litigants] that it is a problem for someone who is covered by the Emoluments Clause to have a business where foreign governments are patronizing it, they can pass [legislation outlawing it.]”

Actual harm isn’t the only requirement for standing, either. Part of the drill is that a plaintiff must show that the court to which it pleads has the power to actually remedy the injury suffered. Judge Tatel raised that problem at oral argument too, prompting, “Congress has no remedy, correct? Other than, I suppose, impeachment, right?”

The D.C. Circuit won’t have been the first court to be skeptical on the issue of standing and emoluments. It may be yet another issue for the Supreme Court to resolve.

A separate emoluments lawsuit was brought last summer by the attorneys general of Maryland and D.C. It was dismissed due to a lack of standing, but the full Fourth Circuit Court of Appeals agreed to rehear the case on December 12.

At the lower court level, Trump’s legal team got a big win in the form of a dismissal of another emoluments case. Trump had argued that no one, least of all CREW (the ethics watchdog group that brought the initial emoluments case), has been actually harmed by any of Trump’s business dealings. CREW had even listed 27 ways it has been actually harmed by Trump’s alleged violation of the Constitution, but United States District Judge George B. Daniels found that it still wasn’t enough to equal standing. Daniels wrote in the court’s dismissal order in 2017:

To be sure, CREW alleges that the time, money, and attention it has diverted to this litigation from other projects have placed a significant drain on its limited resources. But such an allegation, by itself, is insufficient to establish an injury in fact.

Judge Daniels, too, appeared unconvinced that the court had the required ability to remedy any wrongdoing, writing:

Plaintiffs are likely facing an increase in competition in their respective markets for business from all types of customers-government and non-government customers alike-and there is no remedy this Court can fashion to level the playing field for Plaintiffs as it relates to overall competition.

Recently, though, the Second Circuit Court of Appeals revived the case and viewed standing a bit more broadly:

The complaint adequately pleads a competitive injury of lost patronage directly traceable to the fact that the President’s allegedly illegal conduct induces government patrons of the hospitality industry in Washington, D.C. and New York City to patronize Trump establishments in preference to Plaintiffs’ establishments.

Whether the Second Circuit’s more lenient take on standing is the start of a new trend remains to be seen. Those closest to both sides of the emoluments cases continue to hammer away — without addressing what’s actually relevant at this point in the proceedings.

Sen. Blumenthal said after Monday’s arguments that he is hopeful about the case’s outcome — but failed to even mention the critical issue of standing. The senator said:

[Trump] cannot continue accepting payments and benefits at the hotels and the condominiums and the rental properties and permits and trademarks all around the world unless you come to Congress for consent. There is no reason Congress has to pass a bunch more statutes when the highest law in the land always bars this corruption.

As for President Trump, he strayed even farther from the central issue. Trump told reporters in October, “You people with this phony Emoluments Clause.”