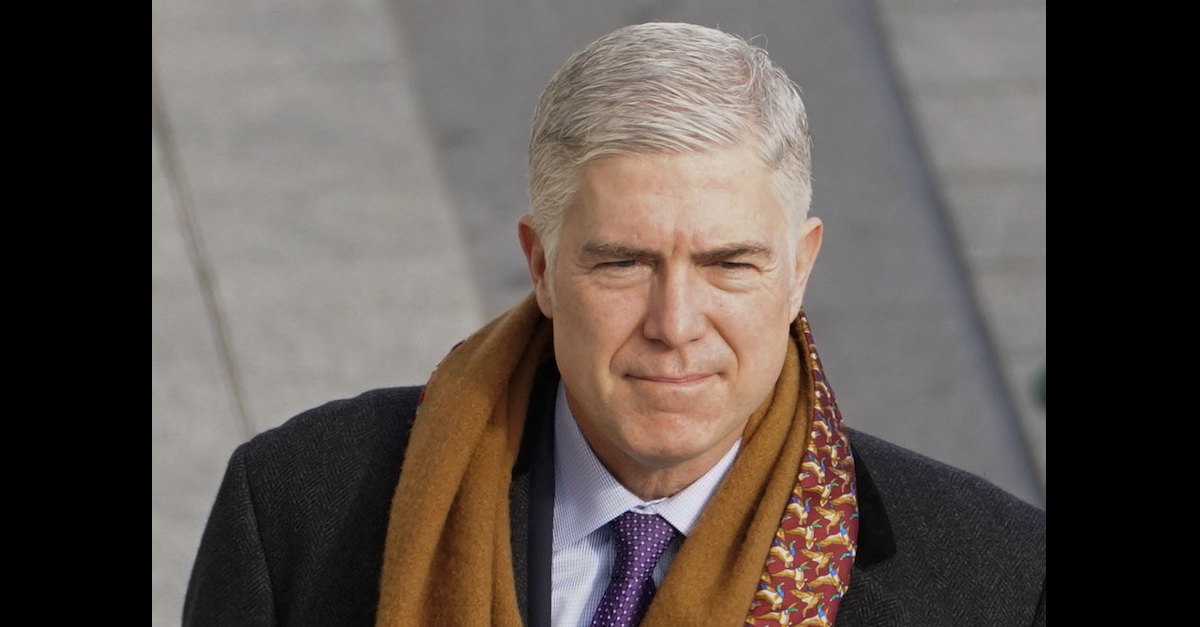 Supreme Court Justice Neil Gorsuch was thoroughly irritated with his fellow justices Thursday, and he wasn’t shy about saying so. In two opinions, Gorsuch penned his own thoughts which sharply criticized the Court’s majority for, among other things, getting its words wrong.

Gorsuch dissented in Torres v. Madrid, a case in which a New Mexico woman mistook two cops as carjackers as they attempted to execute an arrest warrant on someone else. The woman, Roxanne Torres, sped away to escape. The officers fired at her 13 times and struck her twice. Torres later sued the officers under 42 U. S. C. §1983, claiming that the shooting amounted to excessive force and unreasonable seizure under the Fourth Amendment.

Five members of the Court (Chief Justice John Roberts, and Justices Stephen Breyer, Sonia Sotomayor, Elena Kagan, and Brett Kavanaugh) agreed with Torres. The Court found that police had, indeed, seized Torres, even though they did so from a distance and with guns.

According to Justice Gorsuch (whose dissent was joined by Justices Clarence Thomas and Samuel Alito), the majority came up with a totally new — and totally wrong — take on what “seizure” means.

“Until today,” lamented Gorsuch, “a Fourth Amendment ‘seizure’ has required taking possession of someone or something.”

Writing that the majority committed the mother-of-all SCOTUS sins, Gorsuch accused the justices of “disregard[ing] the Constitution’s original and ordinary meaning” — and other follies of interpretation. Chastising the Court for not only “lean[ing] on” but also “repurpos[ing] an abusive and long-abandoned English debt-collection practice,” Gorsuch slammed the majority for doing what “neither the Constitution nor common sense can sustain.”

Before turning his ire on the Court’s logic, Gorsuch took the time to give his version of the Torres facts. Sure, the plaintiff was shot by officers, but Gorsuch points out that, “At the time, Ms. Torres admits, she was ‘tripping out bad’ on methamphetamine.” In fact, the trip had been so bad that two bullets hit Torres and others hit her car — but “[n]one of that stopped Ms. Torres,” Gorsuch complained. Rather, “[s]he continued driving—over a curb, across some landscaping, and into a street, eventually colliding with another vehicle. Abandoning her car, she promptly stole a different one parked nearby.” A full two years passed before Torres brought her lawsuit, Gorsuch noted.

Gorsuch next launched into a lengthy discussion on just how the Court should have defined “seizure.” The word has always meant “taking possession,” the justice argued while listing multiple dictionary entries on the matter.

The majority applied what Gorsuch deemed a “schizophrenic reading of the word” which was inconsistent in its requirement that possession be part of all seizures. Further, he said, the majority ignored clues from the internal language of the Constitution in favor of doing the unthinkable: consulting Webster’s Dictionary. The majority didn’t even do that properly, he said; according to Gorsuch, Webster’s “lends no support” to the majority’s conclusion.

In an unmistakably parental tone, Gorsuch scolded the majority for admitting the faultiness of its own logic by omission. “Ultimately,” he writes, “it’s hard not to wonder whether the majority says so little about the Constitution’s terms because so little can be said that might support its ruling.”

Gorsuch then slammed the majority for numerous transgressions which include incorrectly interpreting Samuel Johnson’s dictionary, relying on sentence fragments, and adhering to a tenuous precedent out of old English bankruptcy law.

The common law offers a vast legal library. Like any other, it must be used thoughtfully. We have no business wandering about and randomly grabbing volumes off the shelf, plucking out passages we like, scratching out bits we don’t, all before pasting our own new pastiche into the U. S. Reports. That does not respect legal history; it rewrites it.

Although Gorsuch sided with the 8-0 majority in a second opinion released Thursday, he only seemed marginally more accepting of the Court’s legal analysis. Gorsuch penned a 10-page concurrence in Ford Motor Co. v. Montana Eighth Judicial District joined only by Justice Clarence Thomas.

The case was a dispute over personal jurisdiction — the right of a plaintiff to proceed in Court against an out-of-state defendant. The Court ruled that Ford Motor Company could be sued in Minnesota and Montana, because the injuries leading to the lawsuits occurred in those states (and despite the fact that the cars hadn’t been not manufactured or originally sold in those states). The case will take its place as part of the Court’s substantial body of “specific jurisdiction” jurisprudence.

Though he agreed with the outcome, Gorsuch wasn’t a fan of the majority’s methodology. Specifically, he took issue with the majority’s adaptation of precedent to modern times. “If it made sense to speak of a corporation having one or two ‘homes’ in 1945,” he wrote, “it seems almost quaint in 2021 when corporations with global reach often have massive operations spread across multiple States.”

He continued to reprimand his colleagues for a job he believed was not-so-well done: “Not only does the majority’s new test risk adding new layers of confusion to our personal jurisdiction jurisprudence. The whole project seems unnecessary.”

It is in a footnote, though, that Gorsuch pleads his real gripe with the rest of the Court: They simply don’t share his reverence for history and precedent. Calling arguments against Gorsuch’s avowed originalist philosophy a “tired trope,” he writes:

Court followers will know that Gorsuch’s near-obsession with originalism is, to put it mildly, not shared by the rest of the Court.

Legal Twitter was quick to point out that for all Justice Gorsuch’s complaining about the majority, he has made some errors of his own. Some pointed out bluebooking errors in his opinions:

Many are criticizing the theories raised by Justice Gorsuch in his dissent in Torres today.

Not to pile on, but I guess you can add his Bluebooking to the complaints. https://t.co/51f1j8BvpW

Others focused on the inconsistency in his application of law:

For Gorsuch, being unlawfully bound with a zip tie for 10 minutes is a 4A violation but being unlawfully shot is not if the victim of the use of lethal force by the government was able to avoid capture at that time. 6/

Gorsuch, joined by Thomas and Alito in dissent, writes that law enforcement has NOT committed a Fourth Amendment seizure when they shoot a fleeing suspect who manages to escape, which is an atrocious view and I’m glad he lost. Here’s the breakdown. https://t.co/Lx49taxdiN pic.twitter.com/jxlfRyAw0b

Earlier this week, Gorsuch and Sotomayor teamed up in another case to argue for criminal justice reform.