Real Estate Heir Robert Durst, 78, Sentenced to Spend the Rest of His Life in Prison for Murdering Friend to Cover Up Wife’s Death 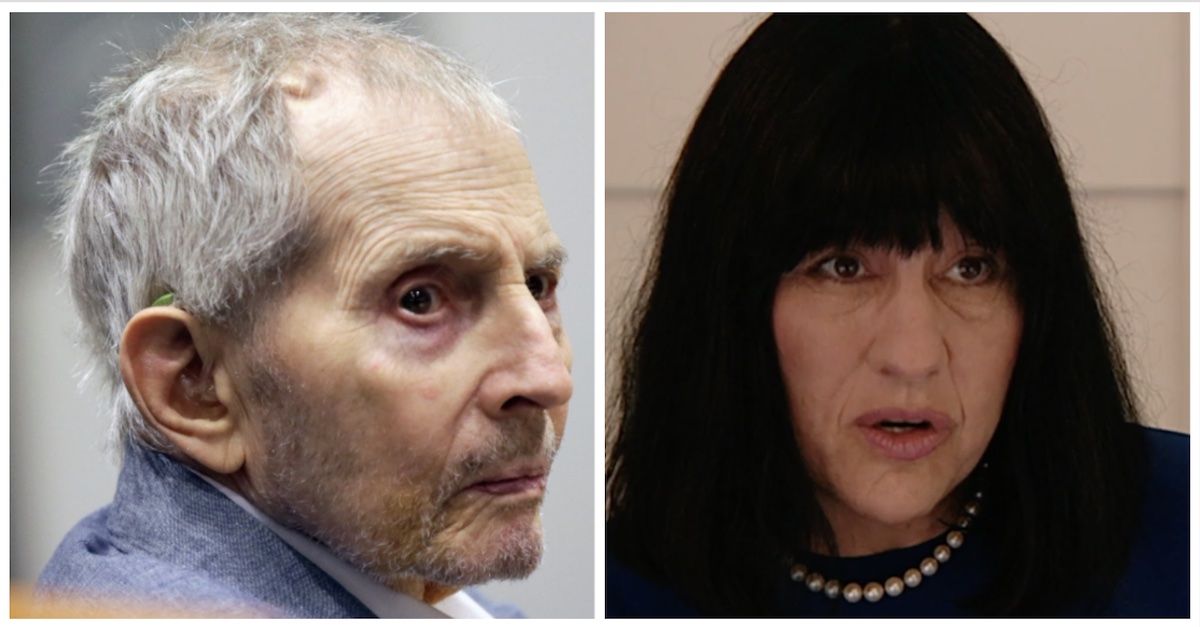 Convicted killer Robert Durst was sentenced on Thursday to life in prison without parole for first-degree murder in the 2000 slaying of his close friend Susan Berman. Barring the unlikely result of a successful appeal (though the Durst case is famous for unexpected twists and turns), the ailing 78-year-old subject of HBO’s The Jinx will die in prison.

At the start of the sentencing hearing, Durst was wheeled into the courtroom wearing a mask and jailhouse clothes. Soon after, jurors filed into the room to attend. 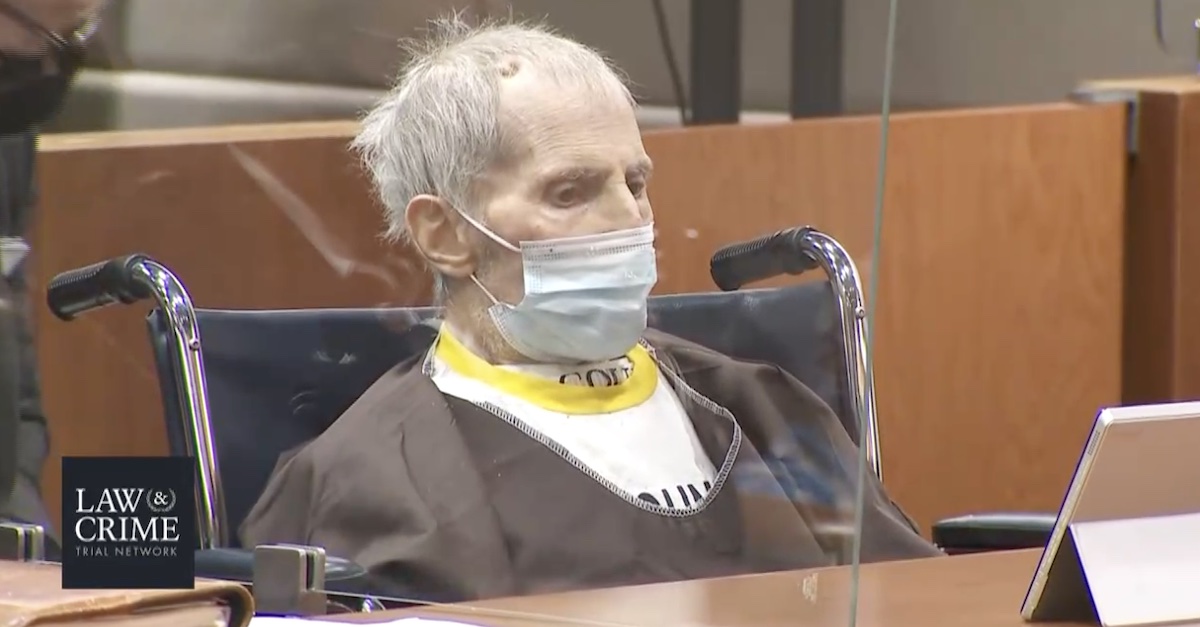 Lead prosecutor Los Angeles County Deputy District Attorney John Lewin began by attacking numerous “red herrings” that were put forth by Durst’s defense lawyers in service of the argument of that Durst was not convicted on sufficient evidence. Lewin, rattling off various defense motions and protestations, ripped Durst’s lawyers for accusing him of prosecutorial misconduct and unethical behavior.

Once Lewin was finished, Durst’s lawyers declined to repeat their contentions.

Lewin chuckled that he was merely repeating the defense’s motions to shoot them down.

Defense lawyer Dick DeGuerin chimed in with a quip of his own, alluding to the words of fellow Texan and former NFL head coach Bum Phillips: “Don’t dance in the end zone, people will think you’ve never been there before.”

Judge Windham got back to business and said that he carefully reviewed each of the defense motions and the “15 alleged legal errors.”

“There is overwhelming evidence of guilt,” the judge said, rejecting the defense arguments one by one.

#RobertDurst -Susan Berman’s cousin, Denny Marcus gives a victim impact statement. “I was robbed and my beautiful son was robbed of an absolutely extraordinary, unforgettable brilliant person whose life was savagely taken from her…” pic.twitter.com/pCiSPCIxYq

“I love her and will continue to love her with every breath,” Marcus said of Berman, calling her a brilliant person who was “savagely taken” from this world by Durst. “She had a very colorful life.”

“Hate was never in my wheelhouse or hers,” Marcus said. She said that for that reason, and because Susan loved “Bobby,” she will not hate Durst.

The next member of Berman’s family to speak, Davie Berman, briefly broke down in tears. Berman said that Durst should give up and tell the truth about what happened to his wife Kathie McCormack Durst.

“He should let us know where Kathie’s body is so her family can get some closure,” he said.

The California jury that convicted Durst in Sept. 2021 also found that he was lying in wait in Beverly Hills before he killed his 55-year-old best friend Susan Berman in her Beverly Hills home because she was a witness to a crime. Los Angeles prosecutors successfully argued that Berman knew Durst killed his 29-year-old wife Kathie Durst in 1982, with Berman even pretending to be Kathie when calling the missing woman’s medical school after her disappearance. Prosecutors also pointed to a confession that they said Durst gave to his and Berman’s former mutual friend Nathan “Nick” Chavin.

Durst shot Berman in the back of the head in her home.

Sareb Kaufman, who along with his sister was raised by Berman, said that he is affected by anxiety and depression everyday because of his mother’s death.

“You are done,” he said of Durst, chalking up the “warped” convicted killer’s legacy to a “child throwing tantrums.”

Kaufman said that Durst murdered the only people he got to love him. He also challenged Durst to come clean about Kathie Durst’s death so that the McCormack family can have some closure.

“My mother’s murder and the events of the last 40 years will never leave me,” Kaufman said. “I love and miss you everyday,” he said of Susan Berman.

After prosecutor Lewin thanked jurors for their extensive and exceptional service, Judge Windham began speaking. He said that he wished he would had known Berman while she was alive because she was an “extraordinary” person.

“Susan Berman was an extraordinary human being,” Judge Windham said. “Killing her was a terrible loss to our community. It was indeed a horrific crime.”

Windham then sentenced Durst to life in prison without parole.

During blockbuster testimony at trial, Durst admitted he lied for two decades about the so-called “cadaver” note that led Beverly Hills police to Berman’s body. For years, he insisted only the true killer could have penned the note. After failing to call a handwriting expert’s analysis into question, Durst told jurors he was actually in Berman’s home that fateful day in Dec. 23, 2000 — and mailed the short message, notably misspelling Beverly as “Beverley.”

“The person who wrote the note killed her,” said Howard Altman, describing the words his godfather Durst once uttered in a Galveston, Texas jailhouse.

The prosecution said that Durst, after killing Berman, went on to kill his Texas neighbor Morris Black in 2001 because he feared that then-Westchester County District Attorney Jeanine Pirro (now a Fox News host) was gunning for him. Durst was famously acquitted of murdering Black in 2005 after he claimed he accidentally killed the man in self-defense during a struggle over a gun. Durst was convicted, however, for chopping up Black’s body.

In summary, Los Angeles prosecutors persuaded jurors that Kathie Durst’s death led to Berman’s death and that Berman’s death led to Black’s death. Odd though it may be, it could very well end up being that the three deaths will be prosecuted in reverse order of their occurrences — that is, if the Westchester County DA’s Office brings the case that Kathie’s family demands. In short, the mandatory punishment for Berman’s murder may not be Durst’s last — and now that current Westchester County DA Mimi Rocah appears to be gunning for Durst, he has nowhere to hide.

New York prosecutors are reportedly set to convene a grand jury against the notorious real estate heir in connection to his spouse’s disappearance. To date, Robert Durst has never been charged in Kathie’s disappearance. Kathie Durst was declared legally dead in 2017. Regional 24-hour channel News 12 reported that subpoenas have already been issued and that a grand jury could be empaneled soon.

In a strange twist, Bill Stevenson, the ex-husband of First Lady Dr. Jill Biden, could end up being a star witness in the potential proceeding. The Stevenson marriage lasted from 1970 to 1975.

Stevenson claimed to have had an affair with Kathie Durst a matter of days before she vanished in 1982. He also claimed that an angry Robert Durst (whom Stevenson called a “monster”) showed up at Kathie’s apartment the morning after their “beautiful night” together:

After the California jury found Durst guilty of murder, Kathie Durst’s relatives released a statement through their attorneys urging the Westchester County DA’s office to “do the right thing.”

The McCormacks said it was “bizarre and unacceptable” that Durst stood trial for murdering an accomplice in Kathie’s death before “being held accountable for Kathie’s murder.”

“Not a single day goes by that we do not think about our beautiful, smart, and kind sister, Kathleen. Today, more than ever before, it is clear that she was murdered by Robert Durst in Westchester County, New York on January 31, 1982. The evidence is overwhelming,” the family’s statement said. “Although Durst has now been rightly convicted of killing Susan Berman, who helped him conceal the truth about Kathie’s death, the McCormack family is still waiting for justice. Kathie is still waiting for justice.”