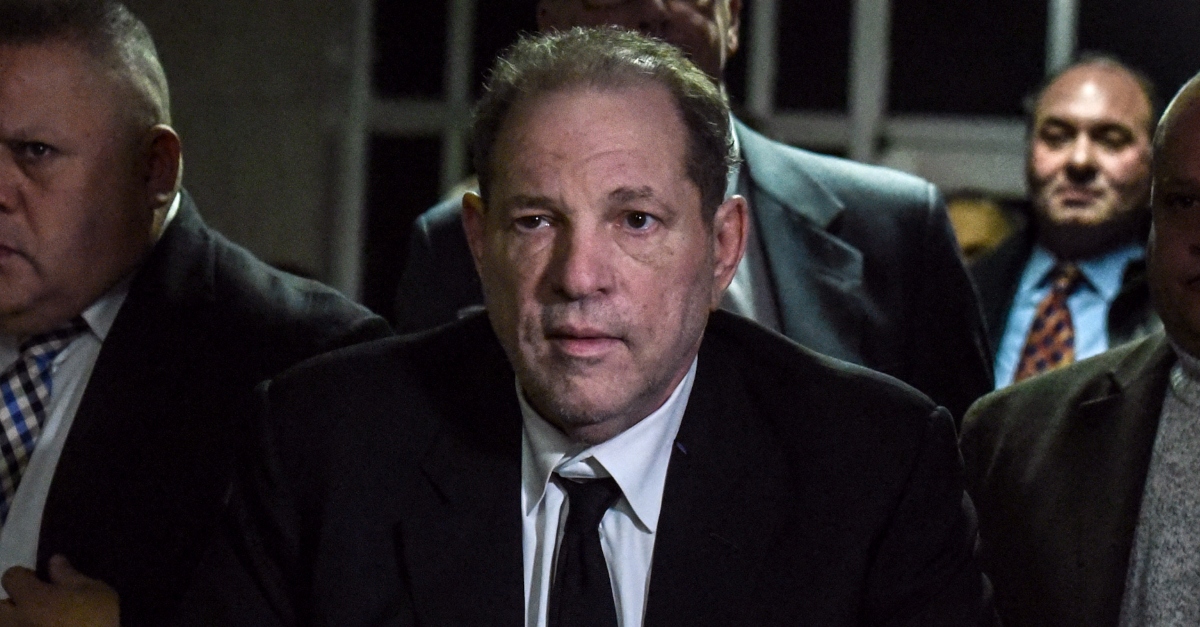 Attorneys for convicted rapist Harvey Weinstein, a disgraced Hollywood producer, filed an appeal in his conviction on Monday. The lawyers assert that the court failed to protect their client’s constitutional rights amid immense public pressure.

“In this climate, the trial court had a special obligation to safeguard Mr. Weinstein’s constitutional guarantee of a fair and impartial jury trial,” attorney Arthur Aidala wrote in a statement obtained by Law&Crime. “Mr. Weinstein’s appellate brief demonstrates that the trial court woefully neglected its obligations in several important ways that renders his convictions and the 23-year sentence unconstitutional.”

More than 100 women, including high-profile Hollywood actresses, said Weinstein used his considerable influence to terrorize them with sexual misconduct up to and including rape. All told, they said Weinstein was a prolific abuser.

Douglas H. Wigdor, an attorney for seven of these women, dismissed the appeal as “desperate.”

“Harvey Weinstein’s criminal appeal is a desperate attempt to undo a fair trial overseen by Judge Burke and the findings of a well-reasoned and thoughtful jury,” he said in a statement obtained by Law&Crime. “We are confident the appeal will not alter his conviction and sentence.”

So far, the sexual assault allegation by former production assistant Mimi Haleyi and the rape claim from former actress Jessica Mann are the only allegations to be adjudicated in court. For that, Weinstein was sentenced one year ago to 23 years behind bars. Meanwhile, Los Angeles County prosecutors are going after Weinstein for allegedly raping women in their jurisdiction.

In the New York case, the prosecution described Weinstein as a manipulative bully. The defense maintained he was just a flawed person who cheated on his wife in consensual affairs.

Details in the appeal will be familiar to those who followed the trial because the defense made a big deal about this at the time. For example, attorneys chastised the court for allowing a juror who was writing a “deeply personal” book about older men preying on younger women. The defense said the juror lied during voir dire, but the defense could not get rid of her themselves because they ran out of peremptory challenges.

“Although the defense raised legitimate questions about whether Juror No. 11 was fit to serve, the trial court failed to discharge its constitutional obligation to conduct a full inquiry to ensure that the juror was capable of rendering a fair and impartial verdict,” the motion stated.

“Mr. Weinstein, I could not implore you more to not answer the following question: Is this really the way you want to end up in jail for the rest of your life, by texting in violation of an order?” he said. “Is it?”

The defense demanded at the time that Judge Burke recuse himself. The judge did not.

Vinoo Varghese, a criminal defense lawyer and a former prosecutor, predicted at the time the outburst opened the path for an appeal.

Note – April 5, 2:57 p.m.: The original version of this article attributed a statement to Weinstein spokesman Juda Engelmayer. Instead, it should have been attributed to attorney Arthur Aidala.