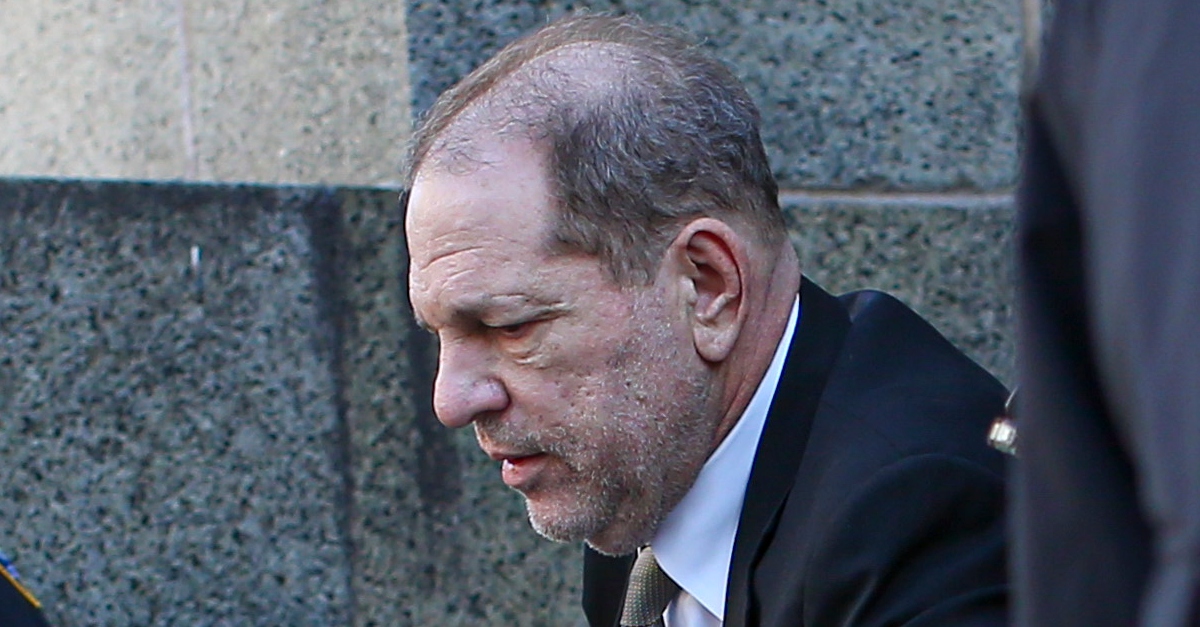 The defense lawyers for alleged sexual predator Harvey Weinstein moved on Wednesday to get Judge James Burke to recuse himself from the case. They said the judge crossed the line when he called out the defendant’s cell phone usage in court.

“Mr. Weinstein, I could not implore you more to not answer the following question: Is this really the way you want to end up in jail for the rest of your life, by texting in violation of an order?” Burke said on Tuesday, according to the letter obtained by Law&Crime. “Is it?”

The defense is using this statement in a bid to get the judge off of the case.

“These comments reflect the Court’s animus towards the Defendant and have created a situation in which the Court’s ‘impartiality might reasonably be questioned,'” they wrote in a letter dated Wednesday, and argued that the judge hasn’t been protecting Weinstein’s right to a fair and impartial jury. “Faced with extreme and unfairly prejudicial negative publicity both pre-trial and now during jury selection, this Court has refused the defendant’s requests for additional necessary procedural safeguards.”

More than 80 women say Weinstein, a powerful Hollywood producer, committed sexual misconduct up to and including rape. Jury selection is ongoing in New York City over two of the alleged victims. The defendant allegedly sexually assaulted a former production assistant Mimi Haleyi at a SoHo loft in 2006, and raped an unnamed woman in 2013.

Weinstein’s current defense team has argued that there’s evidence of consensual and continuing relationships. Through spokespeople, Weinstein has repeatedly denied allegations of rape. Lawyer Donna Rotunno recently threw shade at alleged victim Annabella Sciorra–who is scheduled to testify at trial–for being an “actress.” Speaking obliquely about the comment, the state moved for a gag order, and argued that Rotunno implied that witnesses would lie. Judge Burke denied this, but also denied the defense’s move to sequester the jury throughout the trial.

In their new letter, the attorneys complained about other matters, including the court declining to postpone the trial for a “cooling off period” in the wake of more charges being announced in Los Angeles. The cell phone outburst was a key component of the document, however.

Law&Crime Network host Julie Rendelman, a criminal defense attorney and former homicide prosecutor, said the judge should be aware that any “bias” exhibited against Weinstein could open the door to “appellate issues” down the line.

“The defense is doing an effective job of preserving appellate issues in this case,” Rendelman told Law&Crime in an email. “The court has to realize that while Weinstein is the person on trial, the court also must abide by certain rules of behavior and showing bias towards one side or the other can not be tolerated. With that said, I’m sure the Court’s off the cuff comment was nothing more than frustration that Weinstein refuses to follow the most simple rule of putting his phone away in a court of law. I don’t see the judge recusing himself based on what has occurred thus far. However, this new motion will put the court on notice that any behavior showing unfairness to Weinstein and his defense will be scrutinized.”

The defense reiterated their requests to postpone the trial, get more time for voir dire to examine potential jurors in jury selection, and let Weinstein’s trial consultant sit at the counsel table during voir dire.