‘I Thought It Was Merciful’: Copies of Brian Laundrie’s Notebook Confession to Murdering Gabby Petito Released 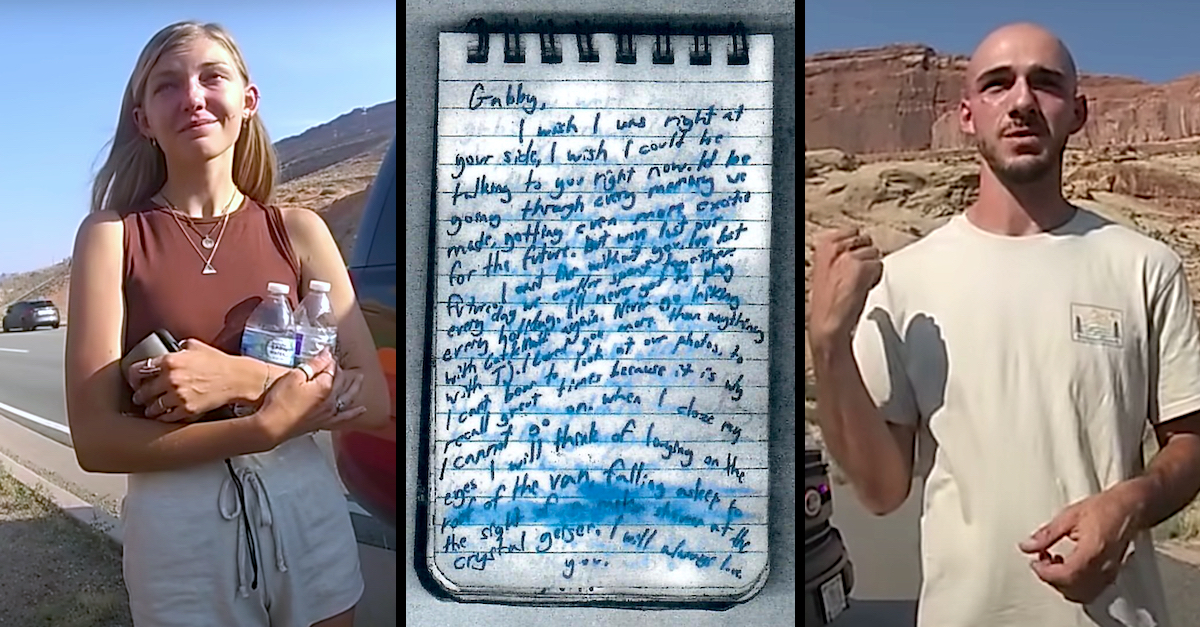 Significant portions of the long-discussed but never-before-seen notebook in which Brian Laundrie confessed to killing Gabby Petito have been released.

A portion of the eight-page document contains a direct admission.

“I ended her life,” the notebook reads in part. “I thought it was merciful, that it is what she wanted, but I see now all the mistakes I made.”

The hand-scribbled missive — which contains only Laundrie’s version of the story — claims that Petito became seriously injured while the couple were trying to return to their van one freezing cold night; Petito may have slipped in and out of consciousness.  Laundrie wrote he killed Petito to end her suffering.

Laundrie said he wanted animals to scatter his own remains once he was dead by his own hand; he hoped that his own postmortem dismemberment would “make some of [Gabby’s] family happy.” Laundrie also wrote that he didn’t fear punishment; rather, he indicated that he ended his life because he was lovesick.

To the extent that Laundrie apparently believed Petito “wanted” to die, he is incorrect as to the law:  as a general rule, a person cannot consent to being murdered.  (In a minority of states where physician assisted suicide is codified by state statute, the procedures are extremely precise; here, obviously, no physician was involved.)

Laundrie family attorney Steven Bertolino confirmed the authenticity of the documents to Law&Crime on Friday afternoon.

“Today the Petito family attorney, Patrick Reilly, and myself met with the FBI in Tampa to sort through and take possession of the personal items that belonged to Gabby and Brian. This was a previously agreed upon exchange to enable both the Petitos and the Laundries to receive what belonged to their respective children,” Bertolino said in a statement to Law&Crime. “As part of this return of property in FBI custody I was given Brian’s notebook. I would like to share with the public the note that the FBI alluded to when they said on January 21, 2022 that Brian claimed responsibility for the death of Gabby Petito. Although I have chosen to release this letter as a matter of transparency I will not be commenting further as there are still proceedings pending in Court.”

The proceedings referenced are a Florida civil lawsuit by the Petito family against the Laundrie family.  However, a copy of the Laundrie notebook has not been filed in court in connection with that case as of Friday.

Petito, 22, and Laundrie, 23, were on a cross-country van trip when Petito vanished in Wyoming.

Laundrie disappeared after returning to Florida without Petito on Sept. 1, 2021.

Petito’s family last heard from her in late August and reported her missing in September; searchers found her body on Sept. 21 in Wyoming’s Spread Creek Dispersed Camping Area. Teton County Coroner Dr. Brent Blue later determined that Petito’s cause of death was strangulation and that the manner of her death was homicide.

Laundrie vanished from Florida on Sept. 13.  His car — a Ford Mustang convertible — turned up near the vast Carlton Reserve in Sarasota County the next day.  The vehicle was situated near the entrance to the Myakkahatchee Environmental Park, which is adjacent to the Carlton Reserve.

The notebook and a backpack were found nearby.

The small ledger, as it was released by Bertolino, began with a direct message to Petito that was sometimes within and sometimes outside the ruled lines of the page.

“Gabby, I wish I was right at your side, I wish I could be talking to you right now,” the notebook reads.   “Id [sic] be going through every memory we made, getting even more exotic for the future.”

The dead man then bemoans that he and his apparent victim “lost our future” together.

“I can’t be without you,” Laundrie wrote.  “I’ve lost every day we could’ve spent together, every holiday.”

“I loved you more than anything,” he went on.  “I can’t bear to look at our photos, to recall great times because it is why I cannot go on.  When I close my eyes I will think of lounging on the roof of the van, falling asleep to the sight of a meteor shower at the crystal geyser.  I will always love you.”

The phrase “crystal geyser” may have been a reference to a location in Green River, Utah.

The second page of the document appears to read as follows, though some of the words are smudged; what preceded and what follows is Law&Crime’s best attempt to transcribe the material:

If you were reading gabs journal, looking at photos from our life together, fliping through old cards you wouldn’t want to live a day without her.  Knowing that everyday youll wake up without her, you wouldn’t want to wake up.  Im sorry to everyone this will affect, gabby was the love of my life, but I know [beloved] by many.  Im so very sorry to her family, because I love them. Id consider her younger siblings my best of friends. [Part of one line and an entire second line are scratched out.] I am sorry to my family, this a shock to them as well a terrible grief.

They loved as much, if not more than me.  A new daughter to my mother, an aunt to my nephews.  Please do not make this harder for them, this [illegible] as an unexpected tragedy, [illegible] back to our car trying to cross the streams of spread creek before it got too dark to see, to cold. I hear a splash and a scream, I could barely see, I couldn’t find her for a moment, shouted her name.  I found her breathing heavily gasping my name.  She was freezing cold.  We had just come from the blazing hot National Parks . . .

. . . in Utah.  the temperature had dropped to freezing and she was soaking wet.  I carried her as far as I could down the stream toward the car, stumbling exhausted in shock, when my knees buckled and knew I couldn’t safely carry her.  I started a fire and spooned her as close to the heat, she was so thin, had already been freezing too long.  I couldn’t at the time realize that I should’ve started a fire first but I wanted her out of the cold back to the car.  from where I started the fire I had no idea how far the car might be.  only . . .

. . . knew it was across the creek.  When I pulled gabby out of the water she couldn’t tell me what hurt.  She had a small bump on her forehead that eventually got larger.  [Several words are scratched out] her feet hurt, her wrist hurt but she was freezing, shaking violently, while carrying her she continually made sounds of pain, laying next to her she said little lapsing between violent shakes, gasping in pain, begging for an end to her pain.  She would fall asleep and I would shake her awake fearing she shouldn’t close her eyes if she had a concusion [sic] . . .

. . . She would wake in pain start her whole painful cycle again while furious that I was the one waking her.  She wouldn’t let me try to cross the creek, thought like me that the fire would go out in her sleep and she’d freeze.  I dont know the extent of gabbys injurys [sic], only that she was in extreme pain.  I ended her life, I thought it was merciful, that it was what she wanted, but I see now all the mistakes I made, I panicked, I was in shock.  But from the moment I decided, took away her pain, I knew I couldn’t go on without her.

I rushed home to spend my time I had left with my family.  I wanted to drive north and let James or T.J. kill me but I wouldn’t want them to spend time in jail over my mistake, even though Im sure they would have liked to.  I am ending my life not because of a fear of punishment but rather because I cant stand to live another day without her.  I’ve lost our whole future together, every moment we could have cherished.  Im sorry for everyones loss.  please do not make life harder for my family, they lost a son and a daughter. the most wonderful girl in the world.  gabby im sorry.

I have killed myself by this creek in the hopes that Annimals [sic] may tear me apart. That it may make some of her family happy.

Please pick up all of my things.  gabby hated people who litter.

The only two people who could vouch for the veracity of this version of the events are now dead.

Read the full notebook below:

This report, which began as a developing story, has been updated with more detail.