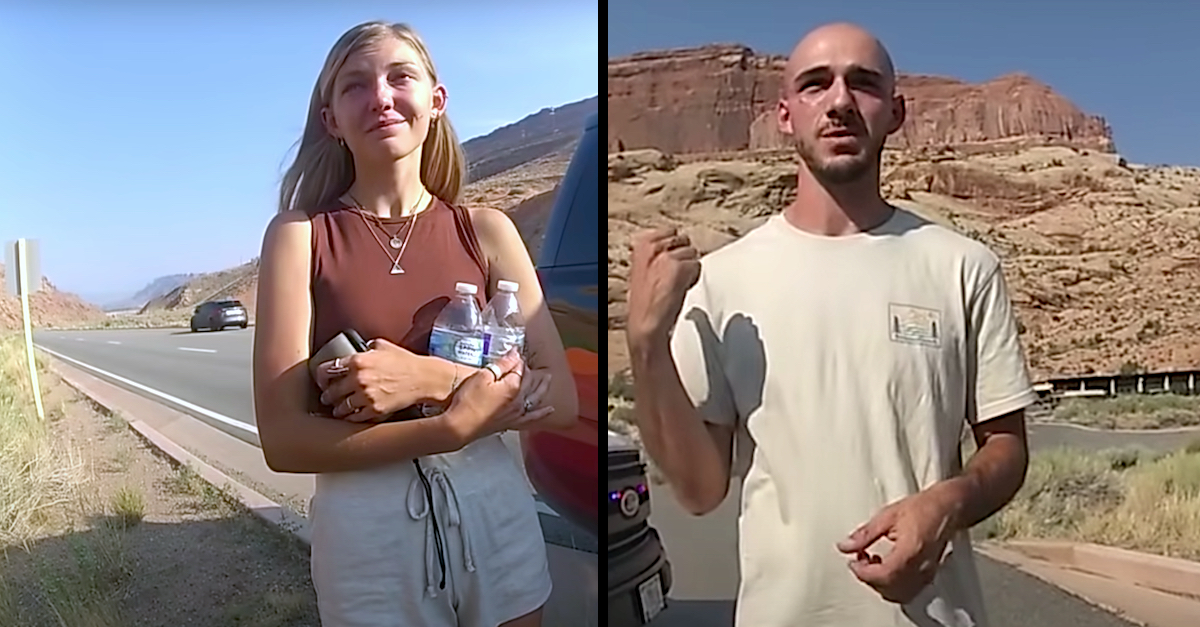 An attorney for the parents of Brian Laundrie has asked a Florida judge to throw out a civil lawsuit filed against the Laundrie family by the parents of the woman Brian is alleged to have admitted killing.

“The Complaint should be dismissed with prejudice and the Plaintiffs should not be granted leave to amend,” wrote Tampa, Fla. attorney Matthew Luka for parents Christopher Laundrie and Roberta Laundrie.  “The Complaint is insufficient and deficient as a matter of law for many reasons and those deficiencies cannot be cured by an amended Complaint.”

Here’s why, according to Luka, the case must be tossed:

The gravamen of the claimed wrongdoing is that the Laundries exercised their constitutional rights and essentially made no statements to the Plaintiffs or law enforcement.  As a matter of law the Laundries’ silence (conduct) should not form the basis of a claim for intentional infliction of emotional distress.  The Laundries’ constitutional rights and the elements necessary for such a cause of action should not change with an amendment of the Complaint.

“Furthermore, the time period at issue occurred several months ago and the foundation of the Plaintiffs claimed distress, wanting to find their daughter, has been resolved,” Luka continued.  “There are no more facts that could emerge that would bolster the Plaintiffs’ claim.”

Gabby Petito disappeared and later turned up dead while she and Brian Laundrie were on a cross-country van trip last summer. Laundrie returned to Florida on Sept. 1, 2021 in the white van the couple had taken on the trip. Petito’s family reported her missing on Sept. 11, 2021. Petito’s body turned up in Wyoming on Sept. 19, 2021.  A coroner determined Petito had been strangled to death, and Petito’s manner of death was listed as homicide.  Laundrie’s body turned up in a Florida nature preserve on Oct. 20, 2021. Authorities determined he died by suicide via a self-inflicted gunshot wound.

The FBI in January 2022 released a statement that said a notebook found near Laundrie’s body “revealed written statements by Mr. Laundrie claiming responsibility for Ms. Petito’s death.”  Neither the notebook itself nor exact copies of its contents have been released to the public.

As Law&Crime previously reported in extensive detail, Gabby’s father Joseph Petito, of Vero Beach, Fla., and Gabby’s mother Nichole Schmidt, of Blue Point, N.Y., filed a civil lawsuit on March 11, 2022, which blamed Brian Laundrie’s parents of prolonging and adding to their agony and suffering by failing to relay their alleged knowledge that Brian had murdered Gabby.

The lawsuit alleged that a previously “cordial relationship” between the families quickly disintegrated and that the Laundries immediately stopped talking to the Petitos on Sept. 1, 2021, despite the fact that Gabby was missing and that a manhunt had engulfed the nation.

As Law&Crime copiously and studiously noted when the original Petito lawsuit was filed, the lawsuit did not name a strict cause of action beyond various facial allegations of “negligence.” It appeared to assert the the Laundrie parents intentionally inflicted emotional distress (IIED) upon the Petito family by remaining silent.

Luka, writing for the Laundrie parents, characterized the original lawsuit as a de facto IIED claim for the purposes of arguing against it and rubbished the Petito family contentions in his own Wednesday court filing.  He said the Petito parents failed to state an actionable claim against his clients.

“Plaintiffs’ Complaint ambiguously draws language from two unidentified causes of action and does not identify either as the cause of action upon which it relies,” Luka noted.  “That deficiency requires dismissal.”

He continued by asserting that the lawsuit “names two Plaintiffs and two defendants without attempting to distinguish between them.”

“The Complaint offers no theory that would impute the conduct of one Defendant against another so any cause of action against them must be separate,” Luka continued.  “Commingling various claims against all defendants may warrant dismissal of a complaint,” he added, quoting and citing Florida case law (we’ve omitted the citations and the internal quotations).

Luka wrote that four elements “must” be alleged under Florida law for a valid IIED claim to make it through the courts:  (1) deliberate or reckless infliction of mental suffering, (2) outrageous conduct, (3) the conduct caused the emotional distress, and (4) the distress was severe.

Here, he says, the plaintiffs have utterly failed to allege sufficient facts to nose their claims into a court of law.

“While the Plaintiffs allege some facts, those facts could never establish a claim for intentional infliction of emotional distress because the Laundries’ ‘actions’ were legally permissible, constitutionally protected, not outrageous, and do not give rise to any cause of action,” the attorney said in the Laundries’ defense.

What follows are scads of pages to argue how the Petito case fails as to each of the four points above.

Luka wrote as follows on one of those four issues (citations omitted):

Although the Complaint alleges that the Laundries’ conduct was “outrageous,” the Complaint’s failure to provide factual support rising to the level of outrageous conduct makes that allegation nothing more than a legal conclusion.  The essential allegations against the Defendants are nowhere close to meeting the necessary standard.

The Laundries’ decision to exercise their constitutional rights to silence, privacy, and counsel and to have their attorney speak for them under such trying circumstances and media pressure could not be further from conduct that is extreme or goes beyond all bounds of decency.  It is what most people would and should do in such a situation and in a civilized community.  The letter by the Plaintiffs’ attorney referenced in the Complaint even acknowledges the conditions faced by the Laundries:  “We understand you are going through a difficult time and your instinct to protect your son is strong.”  The Plaintiffs cannot express sympathy and understanding for the Laundries’ unenviable position and then claim the Laundries caused them emotional distress by not responding in the way Plaintiffs desired.  If the Laundries’ “act” of doing nothing, other than maintaining their privacy and silence, is enough to subject them to this supposed cause of action then there would be virtually no limitations on the tort of intentional infliction of emotional distress and the fundamental right to remain silent under any circumstances would be obliterated.

Elsewhere, the defense attorney said the act of forcing the Laundries to speak would “trample” the latter individuals’ constitutional rights and “would turn our entire constitutional system and the freedom afforded individuals in this country on its head.”

Additionally, the response document says IIED claims can only involve “conduct . . . directed at the plaintiff and in his or her presence.”  And, here, the Laundrie and the Petito families were not in one another’s presence during the alleged conduct cited.

Finally, the filing says the Petitos “all but concede . . . that the Laundries did not cause the Plaintiffs’ grief.”  Rather, “their mental suffering and anguish existed prior to, and independent from, the Laundries’ ‘conduct’ of remaining silent,” the document argues.  Citing case law, the response points out that the law does not penalize defendants when plaintiffs suffer “significant feelings of fright, shame, worry, and humiliation,” as those feelings “even if regrettable” are “an unavoidable part of living in society.”

The Laundrie parents, via a statement by their attorney Steve Bertolino, previously denied to Law&Crime the factual allegations connected to the Petito lawsuit, including the charge that they knew their son had killed Gabby. The legal filing from Wednesday, however, does not make a direct factual denial of the allegations; rather, it rests on legal arguments in an attempt to rubbish the litigation.

An attorney for the Petito family did not immediately respond to a Law&Crime request for comment.

[Editor’s note: this piece has been updated to correct an error in a quoted sentence.]