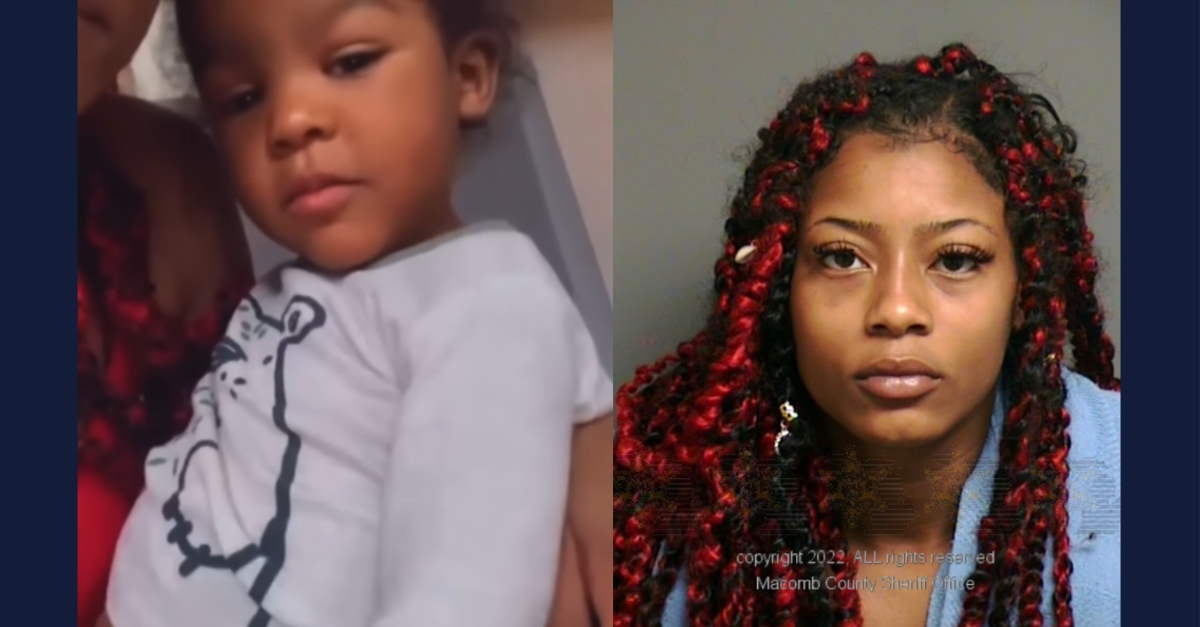 A Michigan woman faces even more legal jeopardy after the toddler she allegedly abused died of his injuries.

Kimora Launmei Hodges, 21, is now charged with felony murder, according to WDIV. She was arraigned Thursday and held without bond.

The suspect was previously charged with child abuse in the first degree. The child’s mother Taylor Starks has identified him as 23-month-old Kyrie. After initially surviving his injuries, the boy did not survive, officers announced.

“He’s only 1 and he knows how to count to 5,” Starks said before her son’s death, according to a WJBK report. “It’s been a week but it feels like forever.”

She described the victim as sustaining serious head trauma.

“He had blunt force trauma to the head and he was bleeding out his ears and had to have immediate brain surgery,” she told WJBK. “All I know is she threw my son into the wall and shook him up pretty bad and they said that’s just a bit of what she did to him.”

Kyrie would have turned 2 next month, according to WJBK.

Hodges was allegedly taking care of Kyrie the night of June 13 at Starks’ home.

The suspect contacted Starks the following early morning about the way he was sleeping, officers said. Starks arrived in minutes and called 911.

“He had blunt force trauma to the head and he was bleeding out his ears and had to have immediate brain surgery,” Roseville Police Chief Ryan Monroe reportedly said.

Starks has described Hodges as a longtime friend and babysitter. Hodges watched Kyrie the past two months while Starks was out at work.

She said Hodges told her about her son eating soap and developing an allergic reactions. Starks said she rushed home to find Kyrie suffering multiple seizures.

Starks also said she initially believed the story about the soap. That changed after she learned of the full extent of his injuries.

She said her son had no brain activity at the hospital.

MURDER CHARGE: According to police, Kimora Hodges was caring for 1-year-old Kyrie the night of June 13. Early the morning of June 14, she contacted the boy’s mother, Taylor Starks, about the way he was sleeping. https://t.co/YXHmEnzpWk pic.twitter.com/OVsQmU7VRg

“Very cooperative and very regretful remorseful for her actions,” Roseville Police Chief Ryan Monroe said of Hodges. “But it obviously doesn’t take it back.”

Hodges’ attorney did not immediately respond to a Law&Crime request for comment.

[Screenshot of Kyrie via Taylor Starks; image of Hodges via Macomb County Jail]