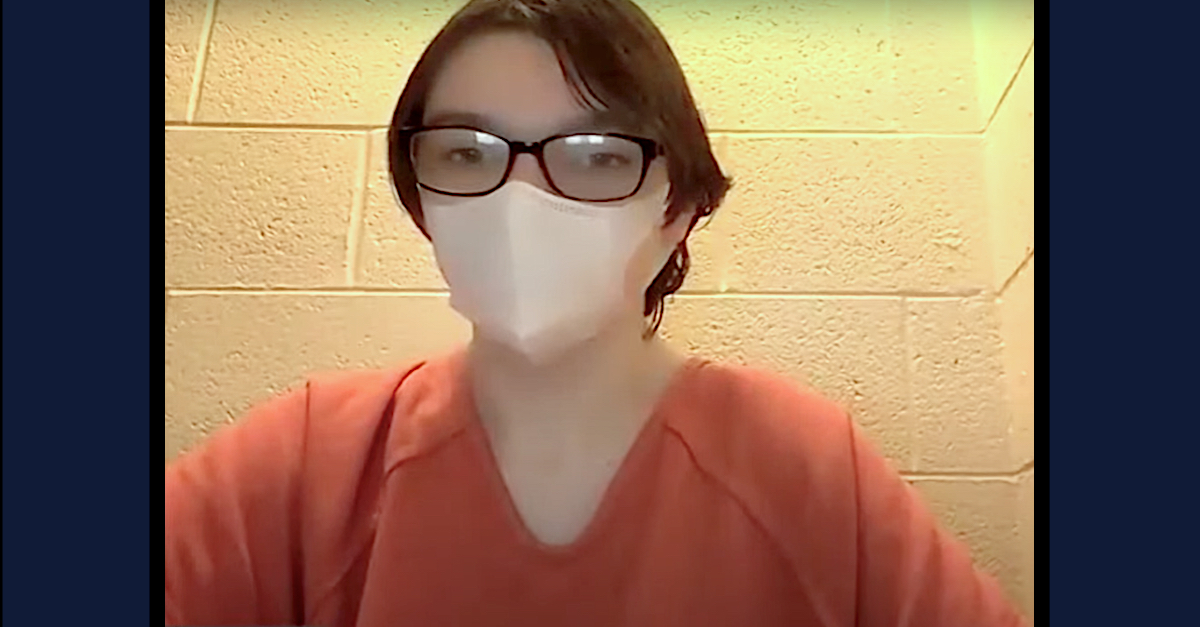 Ethan Crumbley appears in court via Zoom from the confines of the Oakland County, Mich. Jail on March 24, 2022.

Alleged Oxford, Mich. high school murderer Ethan Crumbley appeared in court Thursday pursuant to a law which requires the nature of the teen’s incarceration to be reviewed every 30 days by a judge.

Prosecutors have long asserted that Crumbley belongs in an adult jail given the severity and the nature of the charges against him. Multiple judges have agreed that a placement in a children’s facility would be inappropriate. Their rationale included concerns the juvenile facility’s systems would allow Crumbley to intermingle with teens in an education-like setting — exactly the atmosphere upon which he is alleged to have opened fire and killed four people last last November.

The Juvenile Justice and Delinquency Prevention Act requires a judge to reexamine every 30 days whether confinement in an adult facility remains appropriate for Crumbley. The judge on Thursday agreed that it was.

The bulk of the Thursday hearing involved arguments from Deborah McKelvy, Crumbley’s court-appointed guardian. McKelvy argued that the state misstated the law regarding Crumbley’s education when prosecutors asserting that the teen’s parents carried ongoing responsibilities for ensuring the teen had access to school programs behind bars. Rather, McKelvy said, the law says Crumbley’s jailers now bear a responsibility for ensuring the teen is afforded educational opportunities behind bars.

“The child’s parent, guardian, or other person in this state having control and charge of the child” must provide for his education, McKelvy noted while she cited state law.

“Right now, and as of the date of the incident, [that] has been the Oakland County Jail . . . even at our last hearing there was testimony that everybody believed that it’s the parent’s responsibility and it’s no longer the parents’ responsibility,” she added.

McKelvy said she had received “an extensive email” about Crumbley’s educational offerings “that will either give him an high school equivalency diploma or a GED.”

“He is thinking about what path he wants to proceed with,” the guardian said with regards to Crumbley’s educational choices while articulating the nuances and particulars of the teen’s options. Most of the discussion involved perfunctory scheduling details for various schooling selections; McKelvy said Crumbley turns 16 at the end of April and that decisions must be made before that date.

However, she noted, Crumbley couldn’t enter a certain high school equivalency program until this coming September because he had already missed a deadline for funding for the current school year.

That leaves programs administered by the Michigan Department of Labor and Economic Opportunity. McKelvy said she could pursue those options once Crumbley turns 16 next month.

The programs would be online, and jailers have indicated that Crumbley would have access to his laptop so that he could partake in the educational programs of his choice, the guardian said.

McKelvy said Crumbley might even be able to take some college-level courses online.

One of the several assembled prosecutors said the state was glad that progress was being made as to Crumbley’s educational prospects as required by law.

Oakland County Circuit Court Judge Kwamé L. Rowe said he was pleased that the parties were cooperating pursuant to the law which affords Crumbley with educational opportunities but said he saw no reason to remove Crumbley from the adult jail where he is currently housed.

Crumbley spoke only once to assert that he was comfortable appearing via Zoom. His attorneys, who have copiously briefed and argued that the issue of the defendant’s placement, did not vociferously reassert those arguments on Thursday. Prosecutors also rested their arguments on written briefs.

Crumbley will return to court — likely via another virtual appearance — on April 21 for a combined pretrial hearing and 30-day status check on his incarceration at an adult jail.