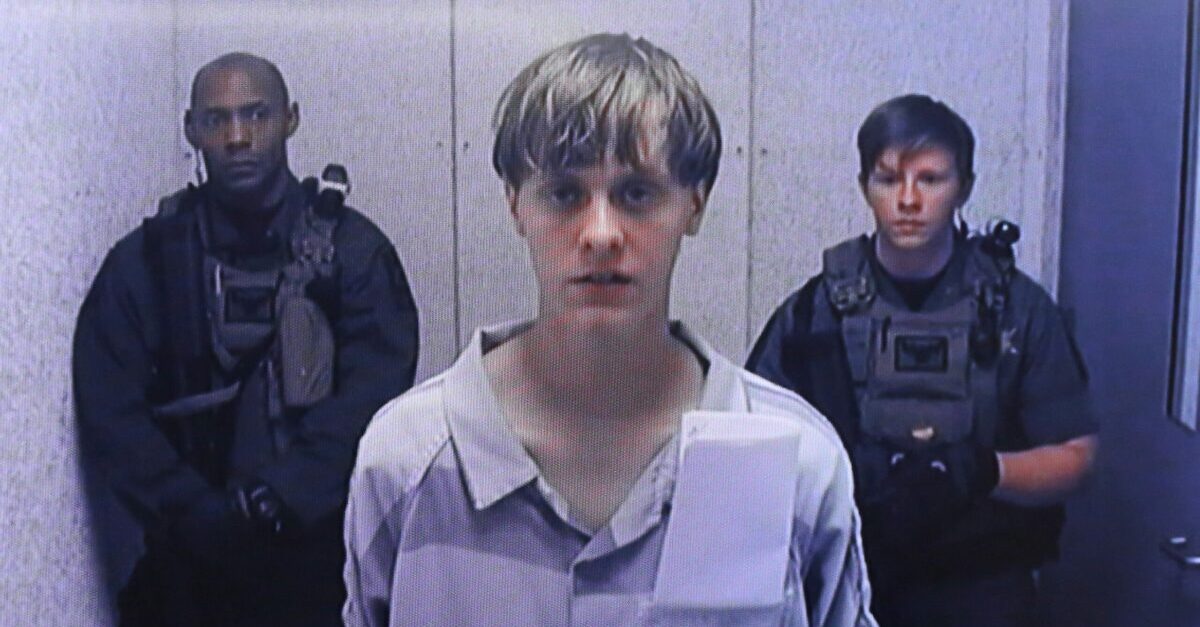 In this image from the video uplink from the detention center to the courtroom, Dylann Roof appears at Centralized Bond Hearing Court June 19, 2015 in North Charleston, South Carolina. (Photo by Grace Beahm-Pool/Getty Images)

Some seven years after his racist mass shooting inside an historic Black church killed nine people and terrorized a nation, convicted murderer Dylann Roof lost his bid for the Supreme Court to review his death penalty case.

The justices rejected his petition without any noted dissents or explanation.

Motivated by his neo-Nazi ideology, Ro0f opened fire on a group of Black worshipers taking part in Bible study inside Emanuel African Methodist Episcopal (AME) church on June 17, 2015, killing nine. A federal jury in South Carolina found Roof guilty of all 33 of the crimes charged against him later the following year, sentencing him to death.

Roof later pleaded guilty in his related state prosecution in exchange for a life sentence and no chance of appeal.

In seeking to avoid capital punishment in the federal case, Roof’s defense attorneys wanted to present evidence depicting him as autistic and psychotic, but the killer refused that option to avoid discrediting what he viewed as the political motivations for his act: an effort to provoke a race war.

For Roof’s federal public defenders, that sequence of events raised an unresolved question as to who gets “final say” over what mitigating evidence to present in death penalty case: the defendant or his lawyers.

“Roof fired his lawyers and stood alone against the government at his sentencing, presenting no evidence or intelligible argument for his own life, after the district court told him that counsel could introduce evidence depicting him as mentally ill over his objection,” his attorneys wrote in a petition for a writ of certiorari. “But while that is the law in the Fourth Circuit and a handful of other jurisdictions, the vast majority of state and federal courts hold otherwise, leaving this deeply personal choice to a defendant. Had Roof been tried in any one of those majority jurisdictions, he would not have been forced to self-represent at his capital trial to block his own attorneys from presenting evidence he abhorred. Though his crime was undeniably horrible and the government’s case in aggravation substantial, Roof had a meaningful non-mental-health mitigation defense that jurors should have heard.”

In August 2021, the Fourth Circuit Court of Appeals rejected that view, writing that Roof deserved the punishment available.

“No cold record or careful parsing of statutes and precedents can capture the full horror of what Roof did,” the court’s ruling stated. “His crimes qualify him for the harshest penalty that a just society can impose.”

Emanuel AME’s parishioners welcomed Roof into their congregation for Bible study and offered him literature for the day’s discussion. The group prayed for 45 minutes, and as the session ended, Roof pulled out a Glock .45 semi-automatic handgun that he had concealed in a bag that also carried eight magazines loaded with 11 bullets in each.

“Dylann Roof murdered African Americans at their church, during their Bible-study and worship. They had welcomed him. He slaughtered them,” the Fourth Circuit noted last year. “He did so with the express intent of terrorizing not just his immediate victims at the historically important Mother Emanuel Church, but as many similar people as would hear of the mass murder.”