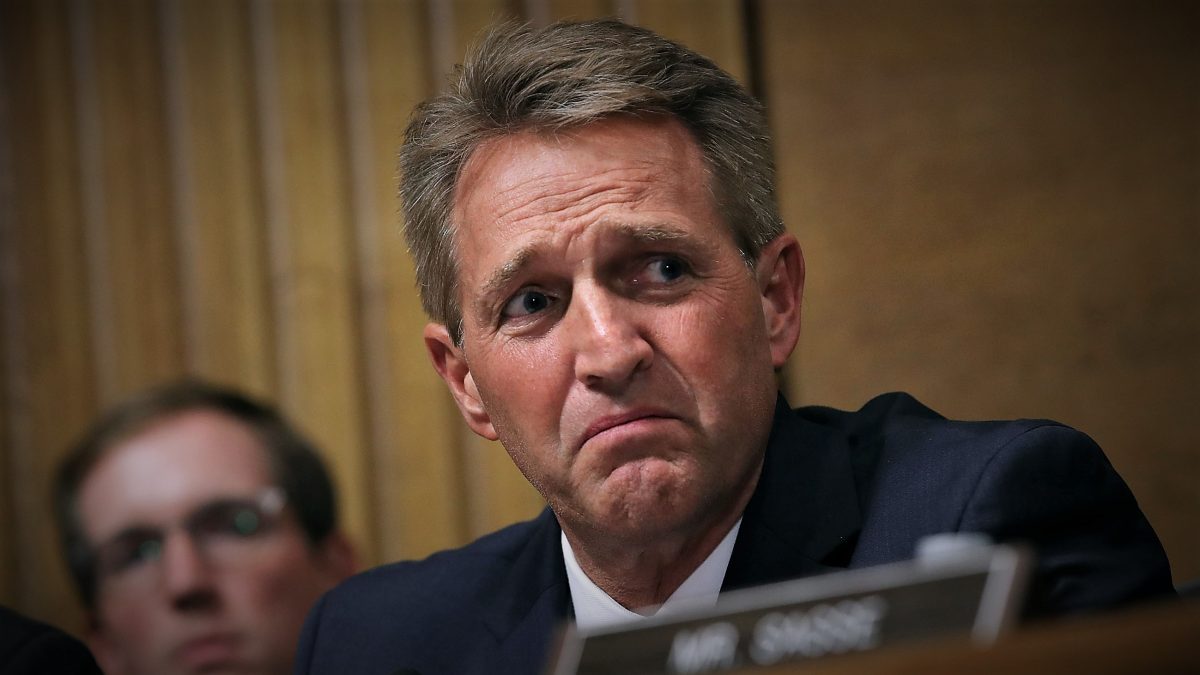 Republican Senator Jeff Flake of Arizona on Friday issued a long-awaited statement: he supports Supreme Court nominee Brett Kavanaugh and will vote in Kavanaugh’s favor. (But, wait! After being confronted by protesters, Flake flaked and said he only supported Kavanaugh pending a truncated FBI investigation, which he would want to see complete before a full floor vote.) Here’s the problem, though: Flake’s endorsement, which came shortly before Flake voted to support Kavanaugh’s passage through the Senate Judiciary Committee, largely obscures the reality of sexual assault law and, thus, is mostly legally incorrect.

After hearing more than 30 hours of testimony from Judge Kavanaugh earlier this month, I was prepared to support his nomination based on his view of the law and his record as a judge. In fact, I commented at the time that had he been nominated in another era, he would have likely received 90+ votes.

When Dr. Ford’s allegations against Judge Kavanaugh surfaced two weeks ago, I insisted that she be allowed to testify before the committee moved to a vote. Yesterday, we heard compelling testimony from Dr. Ford, as well as a persuasive response from Judge Kavanaugh. I wish that I could express the confidence that some of my colleagues have conveyed about what either did or did not happen in the early 1980s, but I left the hearing yesterday with as much doubt as certainty.

What I do know is that our system of justice affords a presumption of innocence to the accused, absent corroborating evidence. That is what binds us to the rule of law. While some may argue that a different standard should apply regarding the Senate’s advice and consent responsibilities, I believe that the constitution’s provisions of fairness and due process apply here as well.

I will vote to confirm Judge Kavanaugh.

A few commentators are questioning why Flake is applying the burden of proof necessary for a criminal conviction in what ultimately amounts to a job interview for a lifetime appointment. Let’s set that debate aside.

Legally, Flake appears to believe that corroborating evidence is necessary for the presumption of innocence to be stripped away from an individual in the criminal context. A quick survey of various state laws will show that’s definitely not the way it works.

As a general rule, Flake is incorrect: the common law does not generally require corroborating evidence for a criminal conviction. One person’s word is good enough for almost every single crime, assuming jurors believe beyond a reasonable doubt the word of the individual giving the account. Certainly, corroborating evidence does help, but it is not necessary. The historical development of this common law rule is outlined here.

When it comes to sex offenses, Flake is only marginally correct. While a few states require some corroborating evidence in some types of sex offense cases, most do not.

Attorney and author Roger A. Canaff, who tracks sex crime laws nationwide, told Law&Crime that only about a dozen states require corroboration of some sort for certain sex crimes convictions. Of the states which do require corroboration, most limit the corroboration requirement to very narrow circumstances (for instance, if the victim of a sexual offense is mentally ill, then some other evidence would be necessary beyond the victim’s testimony in order for prosecutors to win a conviction).

What Flake also fails to address is that the legal trend over the last several decades has been to lessen or to jettison altogether the legal corroboration requirement and to leave the decision fully to the jury. Doing so has made it easier for government prosecutors to convict accused offenders. As the New York Times reported in 1991:

Until the 1970s, rape laws in most states covered only those situations in which a man forced a woman to have sexual intercourse under the threat of bodily injury, she resisted strenuously, and there was outside corroboration. In the early 1970’s, when New York had a very strict rape law, requiring outside corroboration of every element of the crime, there were typically only 18 rape convictions a year statewide out of more than a thousand rape complaints.

New York has eliminated the corroboration requirement. These days, New York does require corroboration for some sex offenses — but only where the victim suffers from a separate “mental defect or mental incapacity” (see here, here). (More broadly, New York law requires prosecutors to present corroboration evidence where cases otherwise hinge solely on a confession or the testimony of a co-conspirator.)

Another example: Massachusetts has a corroboration requirement — but again only in some sex crimes cases (see here, here). (And, again, more broadly, Massachusetts requires corroboration evidence if the state tries to convict a defendant of any crime solely based on the testimony of a witness who is granted immunity from prosecution.) And, on the opposite coast, California requires corroboration for sex offenses only in very narrow situations where adults report certain types of sex abuse from when they were children; the law there is primarily designed to get around the statute of limitations by adding the hurdle of a corroboration element.

Arizona, Jeff Flake’s home state, is also the home state of the sex crimes prosecutor chosen by Republicans to ask questions of Dr. Christie Blasey Ford and Judge Brett Kavanaugh in Thursday’s re-hearing. Under Arizona law, corroboration only appears to be necessary in very narrow circumstances when it comes to sexual crimes, such as when a child victim is unavailable as a witness at trial. Though the corroboration element may be legally atypical, in child sex offense cases, many states do not even require first-hand testimony from a victimized child in order for a conviction to be legal. (More broadly, just like in New York, corroboration is also necessary under Arizona case law where prosecutions hinge only on a confession.)

Bottom line: Jeff Flake’s statement involving the status of modern criminal law is incorrect as a general principle of law. It also is incorrect as applied generally to most sex crimes cases in most states. As the New Hampshire bill illustrates, critics who claim rape convictions are too easy are anxious to bring back the corroboration rules which heighten the burden on victims who say they were attacked — but that hasn’t happened yet.