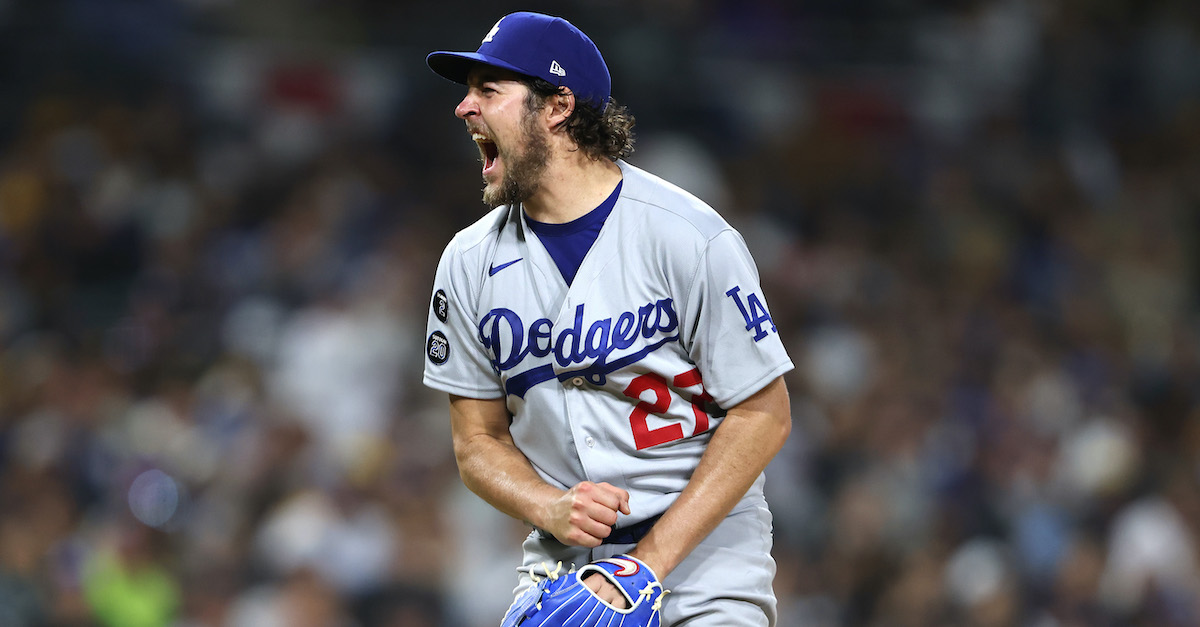 Trevor Bauer #27 of the Los Angeles Dodgers reacts to striking out Trent Grisham #2 of the San Diego Padres to end the sixth inning of a game at PETCO Park on June 23, 2021 in San Diego, California.

The California woman being sued for defamation by suspended Major League Baseball pitcher Trevor Bauer for allegedly falsely accusing him of sexual assault has filed counterclaims over the encounters at the center of the dispute, again accusing him of “violently and sadistically” abusing her.

In a 12-page filing Tuesday in U.S. District Court in the Central District of California, lawyers for Lindsey Hill said Bauer has used his wealth to wage an “organized smear campaign to falsely and maliciously denigrate Hill and other victims.”

“Some men believe they are above the law,” it begins.

“In one online video entitled ‘The Truth,’ Bauer categorically denied, among other things, that he ever punched Hill in the face or vagina,” according to the filing from Bryan J. Freedman and Jesse A. Kaplan of Freedman + Taitelman, LLP. “Tellingly, Bauer did not deny punching Hill in the buttocks or choking her to the point of unconsciousness.”

The filing also says two women in Ohio, where Bauer pitched for the Cincinnati Reds before joining the Los Angeles Dodgers, have since “come forward with information about how they were also battered by Bauer in similar fashion.”

Roughly a year ago, Hill lost her bid to extend a restraining order against Bauer. In that ruling, Los Angeles County Superior Court Judge Dianna Gould-Saltman found Hill’s petition “materially misleading” and noted that the case boiled down to how much of the conduct was consensual “rough sex.”

“We consider that, in the context of a sexual encounter, when a woman says ‘no’ she should be believed,” the judge noted. “So what about when she says ‘yes’?”

According to her ruling, Hill wrote in written exchanges to Bauer that she “wanted all the pain” and wanted to be “choked out,” clarifying when asked that “out” meant “unconscious.” In rejecting Hill’s application, the judge cited the case of Nevarez v. Tonna, a California appellate decision holding that a court only must find a past act of abuse to issue a restraining order, not future likelihood of it.

Bauer’s attorneys Shawn Holley and Jon Fetterolf made sure to note that ruling in a statement.

“Lindsey Hill’s claims were judicially disproven last August following a hearing regarding a DVRO petition filed in bad faith,” they wrote. “She ‘materially misled’ the court and could not meet the lowest burden of proof in our justice system — because her claims were false. She is being sued for defamation to be held accountable for her lies and the damage it has caused. Her countersuit is a regurgitation of her judicially disproven claims and yet another attempt by Ms. Hill to defame Mr. Bauer and seek to profit from her lies.”

Following the ruling denying the extension of the restraining order on Aug. 19, 2021, Bauer went on the counteroffensive against his accuser. In April, Bauer sued Hill for defamation, which Hill’s counterclaims characterize as “part of Bauer’s public relations blitz prior to appealing the 324 game suspension imposed by Major League Baseball.”

Hill is seeking an unspecified amount of damages for battery and sexual battery.

Bauer’s original lawsuit says Hill “aggressively pursued a relationship” with Bauer, had consensual sex with him, then purposely trying to ruin his career through false allegations. The claims are defamation and tortious interference with contract and prospective economic advantage. His lawyers include Shawn Holley of Kinsella Weitzman Iser Kump Holley LLP in Los Angeles.

Hill’s lawyers say the lawsuit is Bauer again victimizing her and has a “disgraceful message” that “battered women should remain silent, because neither the police nor the courts will protect them from a rich man scorned.”

In addition to Hill, Bauer also is suing Hill’s lawyer when she was first accusing him in May 2021, Niranjan Fred Thiagarajah.

Thiagarajah has filed a motion to strike under California’s anti-SLAPP law — strategic lawsuits against public participation — because Thiagarajah’s statements “relate to a matter of public interest” because HIll’s accusations against Bauer “place squarely at issue the serious issue of sexual assault, sexual power dynamics, and a woman’s right to consent.”

A hearing in the case is scheduled for Oct. 3 before Senior U.S. District Judge James V. Selna in Santa Ana, California.