Officers ‘Racially Profiled,’ Shot, and Killed Fleeing Connecticut Man Who Made a Wrong Turn in an Unregistered Car: Lawsuit 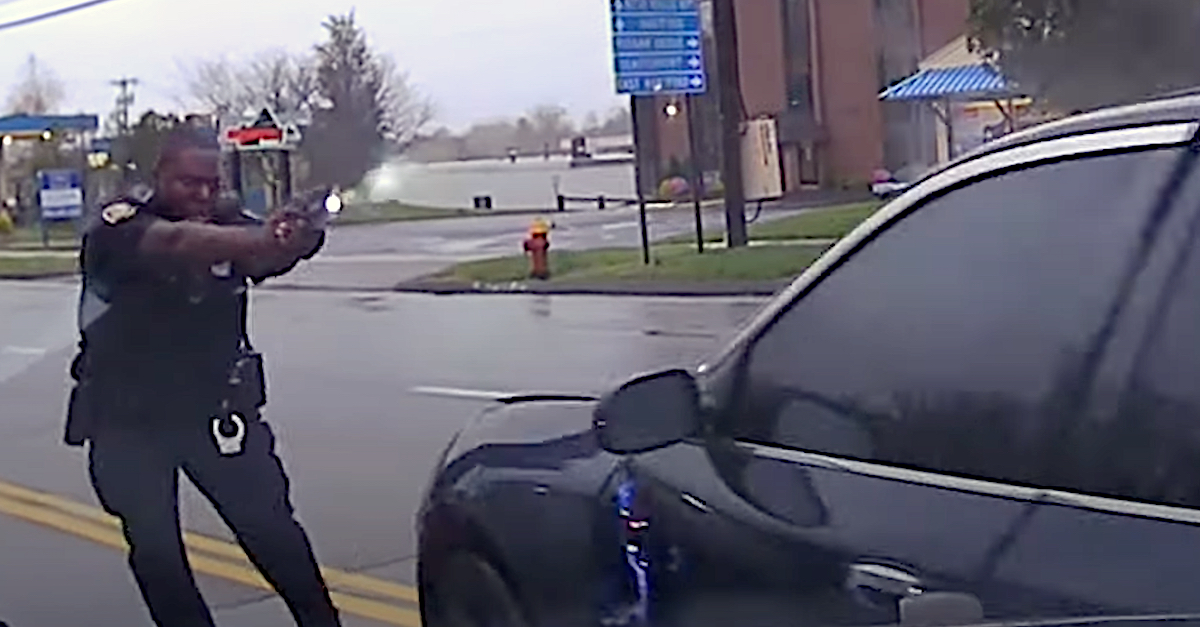 A Connecticut father whose son was shot and killed by a police officer in 2019 has filed a federal lawsuit against the officer who pulled the trigger, the Town of Wethersfield (which employed the officer), and an unknown number of John Does “whose names and identities are not currently known.”

The lawsuit alleges six separate counts involving violations of the Connecticut Constitution, the U.S. Constitution, battery, negligence, and wrongful death. Among the state constitutional claims is that the force used against the victim, Anthony Vega-Cruz, was “unreasonable and unlawful” and that authorities “fail[ed] to provide and/or summons timely medical care following” the shooting.

Jose Vega-Colon is the named plaintiff as administrator of his son’s estate. Officer Layau Eulizier, who fired the fatal shots, is sued in his official and in his personal capacity.

The lawsuit alleges that on April 20, 2019, Vega-Cruz was driving through Wethersfield when officers from the Wethersfield Police Department “racially profiled” him while “pulling him over for a motor vehicle violation.”

“Said vehicle violation is not a felony and at best may be classified as a misdemeanor,” the lawsuit notes.

Despite that, the officers “engaged in a vehicle pursuit,” “attempted to set up a roadblock,” and “rammed” Vega-Cruz’s car “in violation of” department policies, the lawsuit says. “Further, WPD’s policy prohibits shooting at vehicles and using firearms/deadly force against suspected misdemeanor offenders.”

The lawsuit argues that Vega-Cruz lost control of his car specifically because of the police roadblock.  It says the roadblock and the ramming off Vega-Cruz’s vehicle add up to an “unreasonable seizure based on the actual severity of the alleged motor vehicle infraction” and “excessive uses of force.”

State authorities investigated the matter and said the officer who shot Vega-Cruz went to the scene on his own volition.

“Mr. Vega-Cruz initially stopped when pulled over and then fled engaging Wethersfield police in a brief pursuit that ended in his death,” says a report by Gail P. Hardy, the state’s attorney for the Hartford judicial district.

It says a different officer, Peter Salvatore, first started watching Vega-Cruz after noticing “heavily tinted” windows in Vega-Cruz’s car — and because Vega-Cruz appeared to be trying to “elude” the officer while “travel[ing] from one closed bank to another.” A check of Vega-Cruz’s license plate indicated it was registered to a suspended Hyundai. Vega-Cruz was driving an Infiniti.

According to the report, Salvatore said Vega-Cruz took off at “a higher than usual rate of speed than [if he was] casually leaving” the parking lot where he was spotted. However, a review of Salvatore’s dash cam video showed that “[n]othing seemed unusual about the vehicle’s speed,” the report later said.

Salvatore said Vega-Cruz was “weaving in and out of traffic” after leaving the parking lot. However, dash cam video shows that Vega-Cruz “did not appear to be weaving.”

Salvatore radioed for backup from a K9 officer.

Eulizier, the officer who eventually pulled the trigger, was ordering food at a nearby pizza place when he heard the call. He wasn’t the K9 officer requested.

“Officer Eulizier never radioed dispatch that he would be available to respond and assist but he entered his cruiser” and went toward the scene anyway, the report says.

Salvatore pulled Vega-Cruz over. As he got out of his police cruiser and walked toward Vega-Cruz’s Infiniti, Vega-Cruz took off.

Eulizier and Vega-Cruz both crossed into the opposing lanes of traffic, with Vega-Cruz apparently trying to get away and Eulizier trying to stop him, the state report says. Both cars ended up in the entrance to a business parking lot. Eulizier hit Vega-Cruz’s car. Eulizier got out of his vehicle; Vega-Cruz continued to try to flee by backing up. Salvatore, who had caught up by that point, also hit Vega-Cruz’s vehicle. As Vega-Cruz ignored commands to show his hands, Eulizier pulled the trigger, the report says.

Vega-Cruz’s girlfriend, Stephanie Santiago, 18, was in the car; she was unhurt, the report says.  She later told authorities that she and Vega-Cruz were going to eat dinner when they missed a turn. That’s why they were in and out of the shopping plazas which also contained the closed banks which worried Salvatore. Santiago’s phone contained evidence which backed up her account, including the name of the restaurant she and Vega-Cruz were planning to visit.

Santiago said Vega-Cruz was scared because his car wasn’t registered.

“[T]he cop came behind us, hit the lights and he [Vega-Cruz] didn’t stop and they just shot him,” she said.

Eulizier’s employment history was less than stellar, the report indicates. He had been cited for “Conduct Unbecoming an Employee” involving another officer-involved shooting at a previous department; the chief there said Eulizier demonstrated “poor performance during incidents where he appears to be under stress.” The state’s report goes on to cite several other issues involving Eulizier’s tactics while pursuing suspects.

Eulizier gave a statement about the Vega-Cruz shooting — after he’d watched his own squad car video twice.

On April 20, 2019, 18 year old Anthony Vega-Cruz fled from Wethersfield Police, who pulled him over for a motor vehicle violation. In all probability, had he waited, this violation would have resulted in the issuance of a misdemeanor summons as this investigation revealed that Mr. Vega-Cruz had no criminal record and was not “wanted” by law enforcement. Instead, Mr. Vega-Cruz fled and engaged police in a brief pursuit, endangering the lives of innocent motorists, the police, as well as his passenger, Stephanie Santiago. Rather than submitting to authorities after the vehicle stopped, Mr. Vega-Cruz attempted to flee a second time. It was at that time that Officer Layau Eulizier used deadly force, having found himself inches from the front of Mr. Vega-Cruz’s vehicle that was headed north in the southbound lanes. Officer Eulizier discharged his firearm in fear that the operator was about to run him over and that he would lose his own life. His belief that deadly force was needed to defend himself and others from the use or imminent use of deadly physical force was objectively reasonable and therefore justified under Connecticut General Statutes Section 53a-22 (c)(1).

The lawsuit says Vega-Cruz “never attempted to strike ” and “never intentionally struck” the involved officers. It argues that Vega-Cruz lost control because of Eulizier’s aggressive actions in the pursuit. It also says that Eulizier was “not in the direct path of” Vega-Cruz’s car when Eulizier fired.

Rather, Eulizier “was easily able to step out of the way or path of the vehicle,” the lawsuit claims. “EULIZIER was able to and did in fact move out of the way of the DECEDENT’s vehicle. EULIZIER used poor tactics during this incident and poor positioning.”

The lawsuit further argues that the police “did not have reasonable suspicion to detain” Vega-Cruz and did not have “probable cause to arrest him.”

Michael A. Jefferson, an attorney for Vega-Cruz’s father, also demanded that the state reopen its investigation.

“Despite finding that Officer Eulizier violated numerous departmental policies and [that] the ‘reasonableness’ of his actions required an examination by ‘the trier of facts,’ Attorney Hardy ruled that Officer Eulizier’s use of deadly physical force was objectively reasonable and therefore justified under Connecticut” law, a letter states.  “The family and its attorneys vehemently disagree with Attorney Hardy’s legal logic and its application in this case. Her conclusion is flat out wrong and not supported in any way by the facts as presented. Additionally, Attorney Hardy’s decision not to see reappointment to her former position in the face of intense public pressure against her reappointment raises numerous questions regarding her ability to adequately investigate this tragic incident.”

The defendants have not yet responded to the suit.

Anthony Vega-Cruz Letter for Reinvestigation by Law&Crime on Scribd