Off-Duty Arizona Cop Who Shot Man, 61, in Wheelchair from Behind Acted with ‘Depraved State of Mind’: Lawsuit 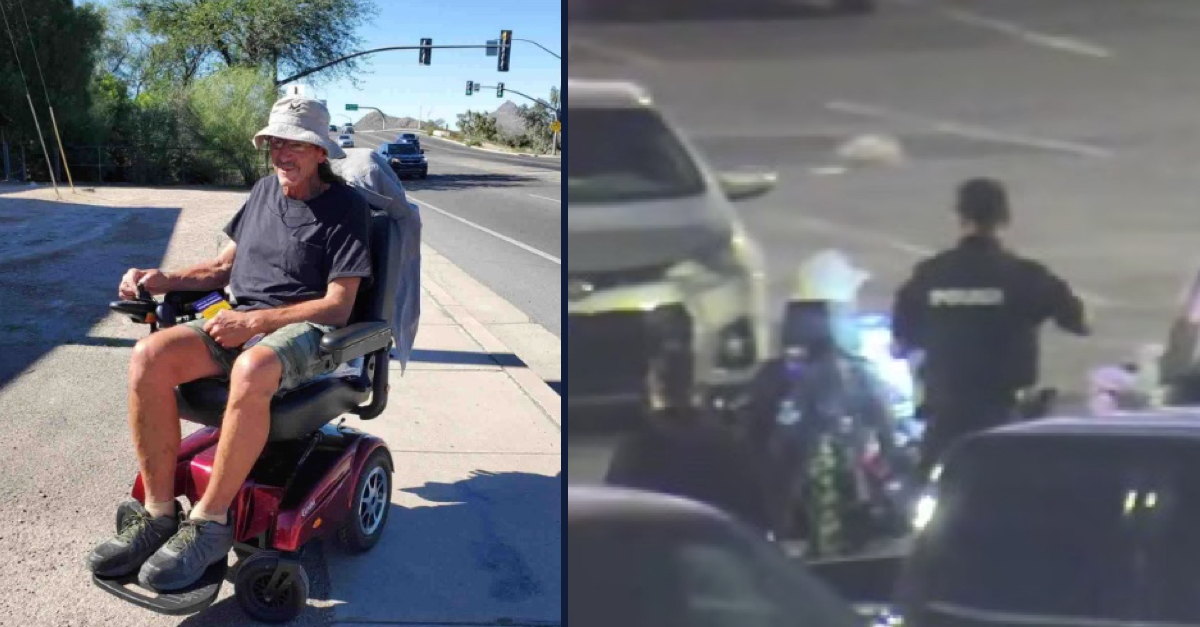 Left: Richard Lee Richards in his wheelchair (via Strang Bradley LLC). Right: security footage of Ryan Remington following Richards in the parking lot prior to the shooting (via Tucson Police Dept.).

The sister of a disabled Arizona man who died after being shot multiple times by a police officer while using his wheelchair has sued the officer and city, claiming wrongful death and civil rights violations.

Richards, who allegedly suffered from a broken hip at the time, was in a slow-moving battery-powered mobility scooter at the time. Attorneys John Bradley and R. Rick Resch say in a complaint on behalf of Richards’ sister, Victoria Richards, that Richard Lee Richards didn’t have to die that night.

“This lawsuit seeks to achieve a measure of justice for Richard Lee Richards and his survivors by establishing the obvious: An officer cannot shoot in the back and kill a slow-moving shoplifting suspect in a wheelchair, without warning, when no one is in imminent danger,” the complaint says.

Remington, who was off duty at the time and, according to Tucson Police, was working a “special duty assignment” at an area Walmart, had been called by a Walmart employee shortly before 6:00 p.m. The employee told Remington that Richards had stolen a toolbox, a Tucscon Police press release said.

“Remington, who’s been with the department four years, joined the Walmart employee in the parking lot and followed Mr. Richards while attempting to gain his cooperation,” the press release said.

The situation escalated from there. According to Tucson police:

According to the employee, he caught up with Mr. Richards outside as he fled the store and asked to see a receipt for the toolbox. Instead of providing the receipt, Mr. Richards brandished a knife and said, “Here’s your receipt.”

Remington was the only officer who discharged a weapon, the press release said.

Although officers attempted to provide medical care to Richards, the press release said, it was too late: Richards was declared dead a few minutes later.

“To be clear, I am deeply troubled by Officer Remington’s actions,” then-Tucson Police Chief Chris Magnus said at the time. “His use of deadly force in this incident is a clear violation of department policy and directly contradicts multiple aspects of our use of force training.”

In January, Tucson Chief of Police Chad Kasmar ordered Remington’s termination from the force. Remington was indicted on manslaughter charges in August.

According to the complaint, there was no need for Remington to fire his gun at Richards; the disabled man had abandoned the purloined toolset in the parking lot, “in view of Remington,” and even if he had tried to flee, his battery-powered wheelchair had a “maximum speed not much faster than an ordinary walking pace[.]” The complaint notes that the video shows that Remington had been able to keep pace with Richards “for several minutes as they traveled across parking lots in a shopping center.”

The complaint describes what happened after Remington opened fire in detail:

After Remington fired the first eight shots, he paused. The following facts were true in that moment: (a) Richards was no longer moving forward, his wheelchair was stopped; (b) Richards had dropped the knife he had and was unarmed; (c) Richards was hunched over from the seven hollow point bullets that had torn into his body; (d) Richards was not a threat to anyone and a Lowe’s store clerk had fled the scene because of Remington’s battery of shots in her direction; (e) the immobilized Richards, Remington, and another officer were the only people in the area; and (f) the other officer, Officer Taylor, had arrived on the scene as backup with non-lethal police tools including a billy club, Taser, and her department-required pepper spray.

After he paused, on the above facts, Remington fired a ninth shot into Richards[‘] body anyway.

The lawsuit says that Remington’s behavior showed an utter disregard for the value of Richards’ life.

“That Remington fired the first eight shots at the back of Richards as he sat there confined in his wheelchair was unconscionable and disturbing,” the complaint says. “But the pause after the eighth shot, followed by the ninth shot, evidences Remington’s depraved state of mind and ought to shock the conscience of all human beings.”

The complaint alleges that Remington never attempted to first use his Taser, despite having “several minutes” to do so, and that he wasn’t carrying his pepper spray, which he was allegedly required to carry, according to Tucson Police Department policy.

The lawsuit alleges that Remington used excessive force against Richards and that the City of Tucson violated the Americans with Disabilities Act by either discriminating against Richards because of his disability or failing to reasonably accommodate him.

“Richards had the right to be arrested without being humiliated or killed because of his disability,” the complaint says.

Read a copy of the complaint: