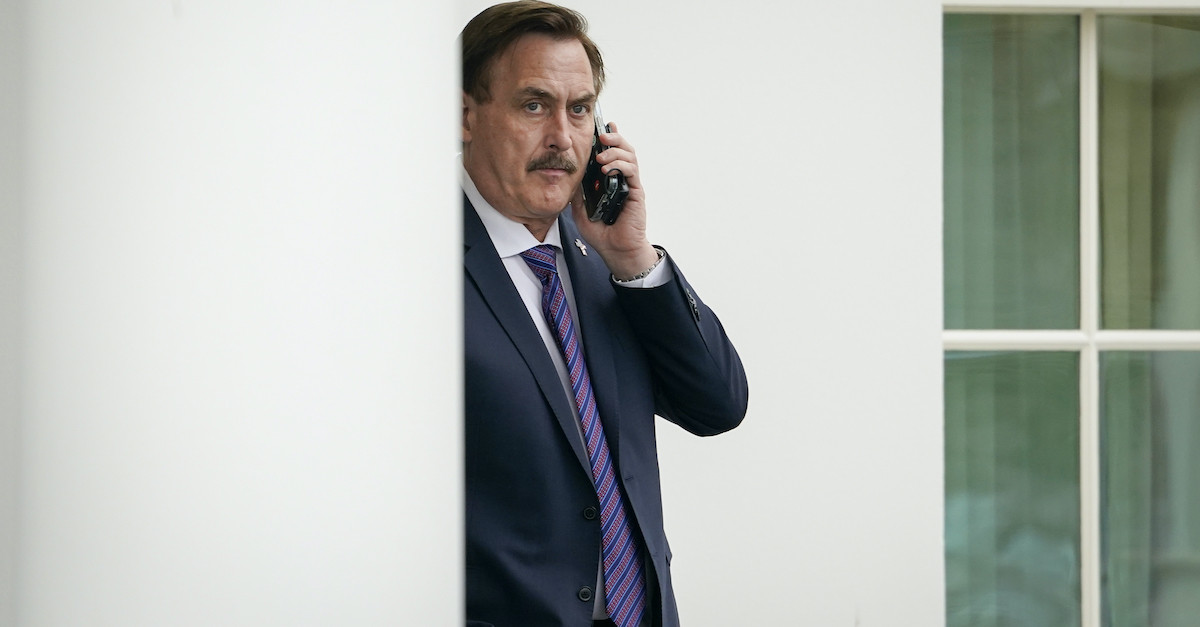 MyPillow, the company headed by Donald Trump supporter Mike Lindell, filed a lawsuit on Monday against Dominion Voting Systems, accusing the election software and voting machine company of somehow depriving MyPillow of its First Amendment right to free speech. Attorneys were quick to call the suit “frivolous” and possibly sanctionable.

The 50-page MyPillow complaint, filed in U.S. District Court in Minnesota, essentially asserts that because private company Dominion provided its services to the government for the 2020 presidential election, it is an agent of the state that is engaging in a campaign of illegal speech suppression.

The $1.6 billion lawsuit comes as Dominion sues MyPillow and Lindell in a $1.3 billion defamation lawsuit. Lindell previously said that being sued by Dominion would make his day. In February, Dominion claimed Lindell knowingly lied about Dominion machines being used to steal the election from Trump “because the lie sells more pillows.”

The MyPillow complaint in response now asserts there is “evidence that Dominion’s voting systems actually were hacked in the 2020 election continues to accumulate.” It also claims that states like Arizona “have found cause to order post-election forensic audits of electronic voting systems—including Dominion’s voting machines—to attempt to ‘restore integrity to the election.’” However, the suit failed to mention that an independent forensic audit of the Dominion machines used in Maricopa County found that there was “no evidence of vote switching and concluded that the equipment tabulated and adjudicated ballots accurately” in the election.

Alan Dershowitz is a member of Lindell’s legal team. He called this “one of the most significant First Amendment cases in our lifetime.”

“The chilling effect of the voting company’s destructive conduct on freedom of speech is enormous as it combines with our current cancel culture to curtail a robust and open debate in the public square of the important issue of election irregularities,” he said.

Lindell, for his part, said he stands by “everything” he said about the 2020 election.

“I’ve had a lot to say about problems with the 2020 elections. Everything I have said is true, and I stand by it all. While MyPillow does not take a position on these matters, it does not stand in my way when I exercise my right as an individual American citizen to share my thoughts,” Lindell said. “And just as the Constitution prohibits Dominion, a government actor, from punishing me for my speech, the Constitution also prohibits Dominion from punishing MyPillow for my speech.”

Attorneys weighing in on the suit were less than kind when discussing MyPillow’s chances of success.

“MyPillow’s super-frivolous cross-complaint is largely based on the premise that Dominion is a state actor because it provides election tech to the government, which is very silly,” he tweeted.

MyPillow’s super-frivolous cross-complaint is largely based on the premise that Dominion is a state actor because it provides election tech to the government, which is very silly. https://t.co/0GzZFxCf4W

“This is why there really needs to be more consequences for actions of legal counsel. Rule 11 truly needs to be enforced more, as well as Bar Counsel involvement,” he wrote. “Dominion’s lawyers are going to have a field day with this one. I envision sanctions being pursued against MyPillow.”

This is why there really needs to be more consequences for actions of legal counsel. Rule 11 truly needs to be enforced more, as well as Bar Counsel involvement.

Dominion's lawyers are going to have a field day with this one. I envision sanctions being pursued against MyPillow. https://t.co/zJLayjaY0Q

Other lawyers also appeared to be dumbfounded by some other arguments made in the complaint.

Just a short hop from "Facebook is violating muh First Amendment rights" to "Dominion didn't give me muh due process before they sued me." pic.twitter.com/HZQ6nKshhQ

I'm not sure how to reconcile MyPillow's claim that it was harmed by Dominion squelching debate about the election with its claim that it really wasn't involved in any of this election stuff at all, but maybe you're meant to read it more as a collection of short stories.

MyPillow says suing it – which is literally providing a legal process for establishing its liability, if any – somehow violated its due process rights. pic.twitter.com/PtX8PvwAN3

This kind of stupid argument is not what you want to be known for @parkerdk3. This isn’t how the state action doctrine works. https://t.co/kNnzSvwEbv

MyPillow Complaint by Law&Crime on Scribd