After Fleeing Earthquakes, a Couple Built a Life in the U.S. for 20 Years. SCOTUS Will Decide Whether Thousands Like Them Can Get Green Cards. 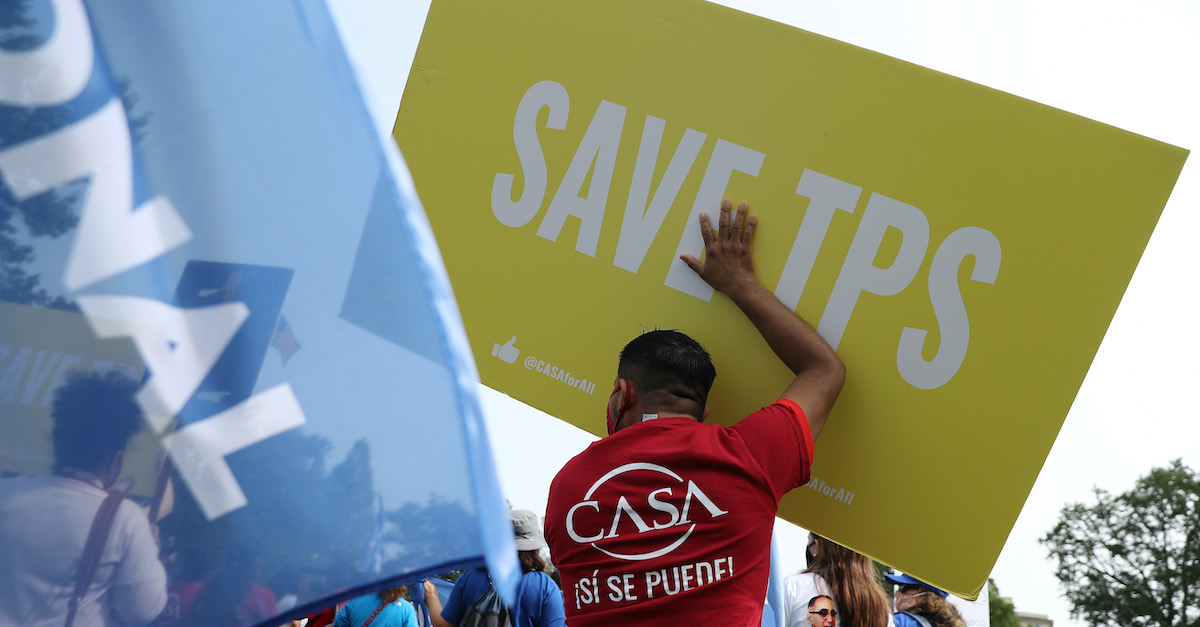 The Supreme Court heard oral arguments on whether immigrants who entered the United States illegally before receiving temporary protected status are eligible for green cards.

After earthquakes devastated El Salvador in 2001, married couple Jose Santos Sanchez and Sonia Gonzalez decided to build a new life in the United States. They applied for, and received, temporary protected status that year and Sanchez’s employer successfully petitioned to get make him eligible for an employment-based immigrant visa some six years later.

Even though the couple built their lives in the United States for more than two decades, three separate U.S. government administrations found them categorically ineligible for lawful permanent residency because of how they originally entered the United States: without an immigration officer having found them “inspected and admitted.”

Their future in the United States, and the lives of thousands like them, hinge upon the interpretation of those three words, which the Supreme Court parsed during oral arguments on Monday.

The justices, dominated by a conservative majority that largely identify as textualists, could restrict the pathway to permanent residency for recipients of temporary protected status (TPS), a program providing humanitarian relief to immigrants who cannot return to their home countries because of armed conflict, natural disaster, or other extraordinary conditions.

“You have an uphill climb, textually speaking,” Justice Brett Kavanaugh, one of the high court’s three Donald Trump appointees, told an attorney for the couple.

The couple’s lawyers argue that temporary protected status automatically confers that a recipient has been inspected and admitted. The government argues that the statute does not.

“We absolutely contend that the government’s reading is the better reading of the statutory text,” Assistant to the Solicitor General Michael Huston told the court.

Oral arguments centered more over parsing of the statute than the couple’s immigrant story.

A married couple from El Salvador with four children, Sanchez and Gonzalez have lived in New Jersey for more than 20 years and held steady employment: Sanchez at Viking Yachts and Gonzalez at the Borgata Casino. Their youngest child, who was born in the United States, is now a citizen here.

As their attorney Jaime Aparisi wrote in their Supreme Court petition, the couple’s situation is hardly unique. Unlike some others, Sanchez and Gonzalez had the misfortune to lose their case in the Third Circuit.

“Under the Third Circuit’s interpretation, TPS recipients who initially entered the United States without being inspected and admitted could never become lawful permanent residents without first leaving this country—and the lives they have built here—behind,” their position states. “Given these stakes, it is no surprise that the question presented recurs frequently.”

The Supreme Court agreed to hear the case in part because the Sixth and Ninth Circuits reached the opposite finding, that recipients of temporary protected status believed to have entered the United States illegally still could be eligible to obtain green cards.

Justice Sonia Sotomayor, reciting the Miscellaneous and Technical Immigration and Nationality Amendments Act of 1991, suggested that the government’s reading of the statute is selective.

“The alien shall be inspected and admitted in the same immigration status that the alien had at the time of departure,” that statute reads.

“By the plain text, it seems to me that any TPS holder who is granted permission to travel abroad and return would be admitted within the meaning of section 1255,” Sotomayor noted. “Yet, you’re telling me that the agency has said no in 2020. It makes no sense to me, counsel.”

Hoping to resolve the circuit split in their favor, Sanchez and Gonzalez argue that Congress’ intent in designing TPS was to provide a “safe harbor” for immigrants whose countries have been wracked by humanitarian crises. Immigration advocates believe that requiring TPS recipients to return to the sites of those upheavals undermines the goal of Congress, by putting them in harm’s way.

“There’s no other logical interpretation of what Congress was doing,” their attorney Amy Saharia, from Williams Connolly, argued.

Kavanaugh noted that the ruling in this case could have broad impact.

“How many people are in this country who are in the same status, roughly?” he asked.

One friend-of-the-court brief estimated that roughly 80-percent of TPS recipients have been living in the United States for more than 20 years.

“Do you dispute that?” Kavanaugh asked.

“No your honor, we don’t dispute that,” Huston replied.

The government lawyer cast those statistics a “testament to the strength of our humanitarian commitments that we have allowed people who have found themselves stranded here during a crisis to stay here for a very long time.”

In the final days of the Obama presidency, immigration officials rejected Sanchez and Gonzalez application for a green card in November 2016.

The Trump administration had taken over by the time the couple sued, and the Biden administration inherited the case by the time it first hit the Supreme Court as Jose Santos Sanchez v. Chad Wolf, the name of the former acting Homeland Security Secretary. The case caption now bears the name of the current Homeland Security chief: Alejandro N. Mayorkas, a Cuban-American who made his family’s own immigration story a pivot point of his congressional confirmation.

Mayorkas adopted the same position on TPS as his predecessors.