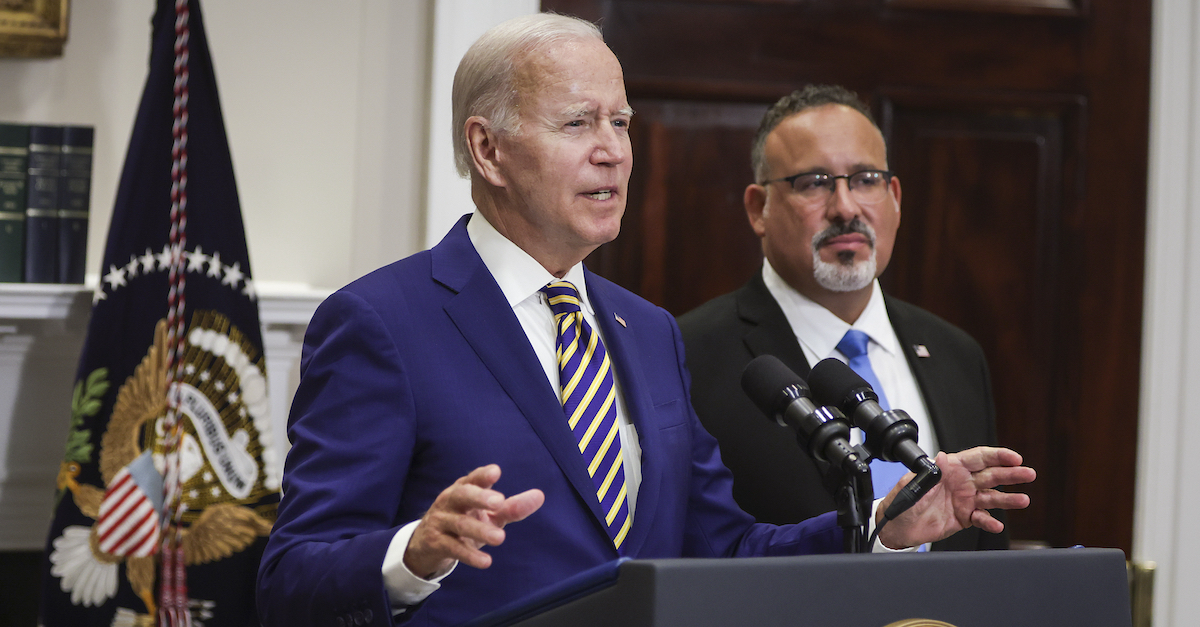 Frank Garrison, an attorney with the libertarian Pacific Legal Foundation, is suing the U.S. Department of Education and Education Secretary Miguel Cardona in U.S. District Court for the Southern District of Indiana.

Garrison’s lawsuit notes that his employment qualifies him for public service loan forgiveness because Pacific Legal is a 501(c)(3) nonprofit. However, he alleges that Biden’s broader loan forgiveness plan violates the Administrative Procedure Act because it is a “rule in excess of statutory authority.” He also alleges that it violates both the non-delegation and the separation of powers doctrines of the U.S. Constitution.

The lawsuit seeks an injunction “prohibiting Defendants from enacting loan cancellation,” several declaratory judgments that would “set[] aside” and declare as “invalid” the loan cancellation plan, attorneys’ fees, costs, and any other relief deemed proper.  A jury trial is requested.

In essence, the lawsuit argues that Biden cannot act unilaterally to cancel student loan debt; that is Congress’s purview, the case argues.

The opening salvo of the 17-page complaint reads as follows:

Student debt cancellation has been the subject of great debate in America for at least a decade. Some argue that the government should provide relief to students to offset skyrocketing tuition costs and the consequent debt incurred by many to attend college. Others point to the regressive quality of student debt relief, arguing that it is unfair to cancel student debts that were freely assumed with taxes raised from those who predominately have not attended college, or attended but avoided debt, or paid it off. Congress has authorized a variety of student debt relief programs, including the Public Service Loan Forgiveness program, by which some debt is written off for students who choose to work in relatively lower-paying public service or non-profit organization positions after graduation and follow program rules for a period of years. Perhaps because of the costs of student loan cancellation, or its potential impact on the economy, or the inherently divisive nature of this debate, Congress has declined to enact more sweeping debt cancellation. This is, of course, Congress’s prerogative under our Constitution, as Congress is the branch of government that possesses the exclusive power to make law.

The lawsuit says the Biden administration proffered a 2003 law “passed in response to the Iraq war as a means of aiding veterans and their families” as justification for the sweeping forgiveness program, which would write off $10,000 or $20,000 in student loans per borrower for “approximately 40 million borrowers,” according to the complaint.

The lawsuit characterizes the move as an impermissible stretch of the underlying statute:

This law—the Higher Education Relief Opportunities for Students or “HEROES” Act—authorizes the Secretary of Education to “waive or modify any statutory or regulatory provision applicable to” student aid programs when “necessary in connection with a war or other military operation or national emergency.” 20 U.S.C. § 1098bb(a)(1). Importantly, to qualify for such a waiver or modification, individuals must reside or be employed in a “disaster area” as declared by a “Federal, State, or local official in connection with a national emergency.” Concluding that the entire nation is a “disaster area” because of the COVID pandemic, the administration claims that the Secretary of Education has the power to “automatically” issue blanket loan forgiveness to 8 million borrowers in the first week of October.

The lawsuit suggests that the “staggering scope” of the forgiveness plan “was taken with breathtaking informality and opacity.”

Specifically, Garrison claims that the plan would unduly harm him because it would subject him to increased state tax liability in Indiana:

The Department did not undertake the notice-and-comment process required for rulemaking, much less solicit any public input. It did not even issue a formal order or directive setting out its cancellation program. Instead, it issued a press release on August 12th along with two legal memoranda providing its justifications, and, later, a hastily created a FAQ section on its website.

In the rush, the administration has created new problems for borrowers in at least six states that tax loan cancellation as income. People like Plaintiff Frank Garrison will actually be worse off because of the cancellation. Indeed, Mr. Garrison will face immediate tax liability from the state of Indiana because of the automatic cancellation of a portion of his debt. These taxes would not be owed for debt forgiveness under the Congressionally authorized program rewarding public service. Mr. Garrison and millions of others similarly situated in the six relevant states will receive no additional benefit from the cancellation—just a one-time additional penalty.

In short, the “impending cancellation was issued in excess of statutory authority and is therefore invalid,” the lawsuit argues.

Citing private studies, the lawsuit alleges that Biden’s plan will “erase more than $500 billion in federal student debt.”  However, a Congressional Budget Office estimate reportedly says it will cost $400 billion.

The lead attorney on the case echoed those thoughts in a press release.

“Congress did not authorize the executive branch to unilaterally cancel student debt,” said Caleb Kruckenberg, an attorney at Pacific Legal Foundation who signed the complaint. “It’s flagrantly illegal for the executive branch to create a $500 billion program by press release, and without statutory authority or even the basic notice and comment procedure for new regulations.”

“Cancelling student debt is unjust to those who have paid their loans or never took any. It will only lead to more calls for government intervention in education at taxpayers’ expense,” said Steve Simpson, senior attorney at Pacific Legal Foundation whose name does not directly appear on the lawsuit. “Loan cancellation will make Americans more divided, as those who paid their loans—or never went to college—will have good reason to think that we no longer have a government of, by, and for the people.”

The full complaint is attached below: