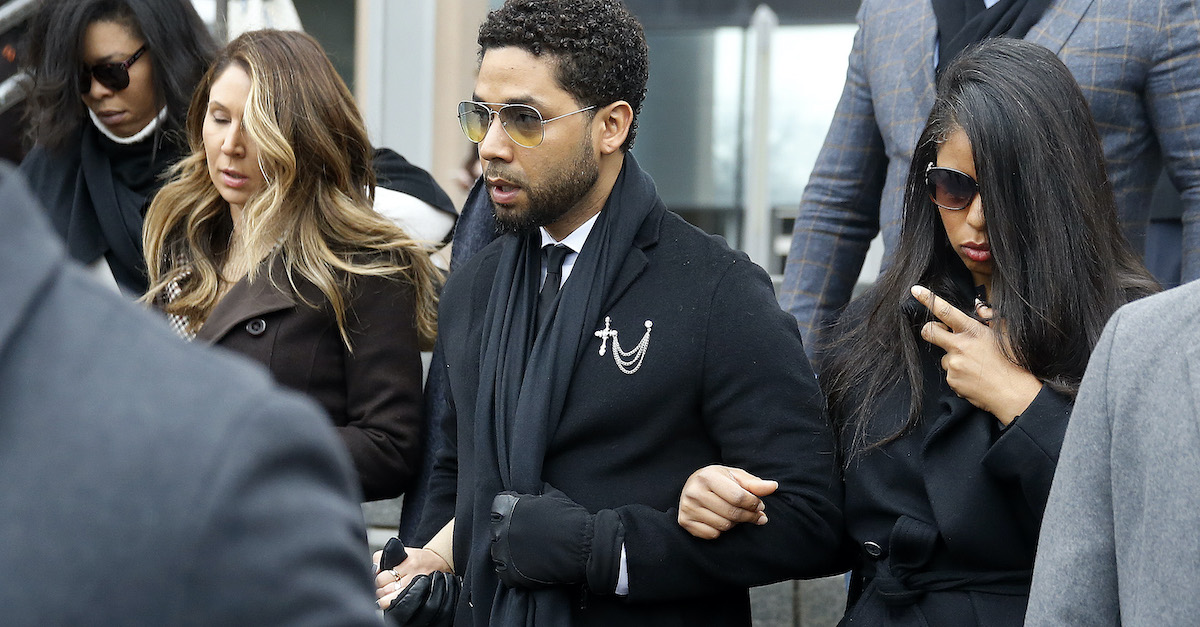 A federal judge in Illinois on Wednesday tossed actor Jussie Smollett’s claims against the City of Chicago for malicious prosecution, noting that the case was never actually resolved in Smollett’s favor.

U.S. District Judge Virginia Kendall reminded Smollett that a special prosecutor indicted him in Feb. 2020 for allegedly filing the false report that he was the victim of a racist and homophobic attack back in 2019.

The special prosecutor, former U.S. Attorney Dan K. Webb, was tasked with getting to the bottom of the circumstances surrounding Cook County State’s Attorney Kim Foxx‘s decision to drop a criminal case against the Empire star.

Judge Kendall noted that the decision to drop the charges came after Smollett agreed to two conditions: (1) to forefeit bond, and (2) to do community service. In other words, the dropped charges were not proof of innocence.

Another problem is that the special prosecutor has taken up the case again.

A third problem for Smollett’s lawsuit against police and Abimbola “Abel” Osundairo and Ola Osundairo–referred to as the “Osundairo Brothers” in the opinion–is that Smollett fell short of showing that authorities lacked probable cause to arrest him. The Osundairo Brothers infamously admitted involvement in staging a hoax. That confession matters, the judge noted.

“While Smollett alleges the statements were unreliable and self-serving, he ignores that there was additional evidence to corroborate the Osundairo Brothers’ statements, including suspicious texts between the parties and the deposit of a large check to Abel shortly before the attack,” the judge wrote. “Smollett alleges the Osundairo Brothers’ statements were unreliable because they are self-serving, but a reasonable ground for belief of the guilt of an accused may be on information from other persons.”

“Given the Osundairo Brothers’ confession, plus corroborating evidence, there was ample probable cause causing a person of ordinary care and prudence to believe or to entertain an honest and sound suspicion that the accused committed the offense charged,” Kendall concluded.

Things didn’t go any better for Smollett’s malicious prosecution claim under 42 U.S.C. § 1983. The judge said Smollett failed to state a claim because the claim “does not exist.”

The judge said Smollett improperly tried to “retrofit” an unlawful detention claim into a case that was pleaded as a malicious prosecution claim under §1983 (the latter of which is not a thing) [citations removed for ease of reading]:

Smollett cannot now attempt to state that he was bringing a Section 1983 claim for unlawful detention when his Countercomplaint makes no such reference. Having been caught attempting to bring a claim that does not exist, Smollett attempts to retrofit the pleadings and claim that, despite changing the underpinnings of his § 1983 claim, sufficient notice of an unlawful detention claim has been provided to the City Defendants so as to not violate Federal Rule of Civil Procedure 8. There is not sufficient notice to apprise the City Defendants that Smollett would be bringing an unlawful detention claim rather than a malicious prosecution claim. As pleaded, Count II pertains to “instituting criminal proceedings against Smollett without probable cause.” While Count II mentions Smollett was deprived of his liberty because “he was in custody for approximately ten hours, and he had restrictions placed on his travel following his surrender to police on February 21, 2019, until the dismissal of charges against him on March 26, 2019,” it is clear that this was intended as an injury resulting from the malicious prosecution and not the injury itself. Smollett urges that we allow his reply to the City’s motion to dismiss serve as a supplement to his pleadings, however, there is no support for allowing a litigant to completely amend his complaint with a new count that is not pled in the original. In fact, this Court and other courts in this Circuit have dismissed complaints where parties have attempted to improperly bring malicious prosecution claims under §1983.

As a result of all of the above, the motions to dismiss filed by the City of Chicago and the Osundairo Brothers were granted with prejudice on the malicious prosecution count. Smollett “cannot bring a state malicious claim until proceedings have been terminated,” the judge said. The second defective unlawful detention count was dismissed without prejudice, meaning Smollett can file an amended version of it with 21 days.